SYNOPSIS: Special extra-size anniversary issue! It’s the final chapter of “The Rule of War”-and all the rules are broken! On the alien planet Trotha, Empress Siddinx’s plan is revealed, and it’s nothing short of world domination-with the Justice League entangled in her puppet strings. But how can the team save a population that now hates and fears them? 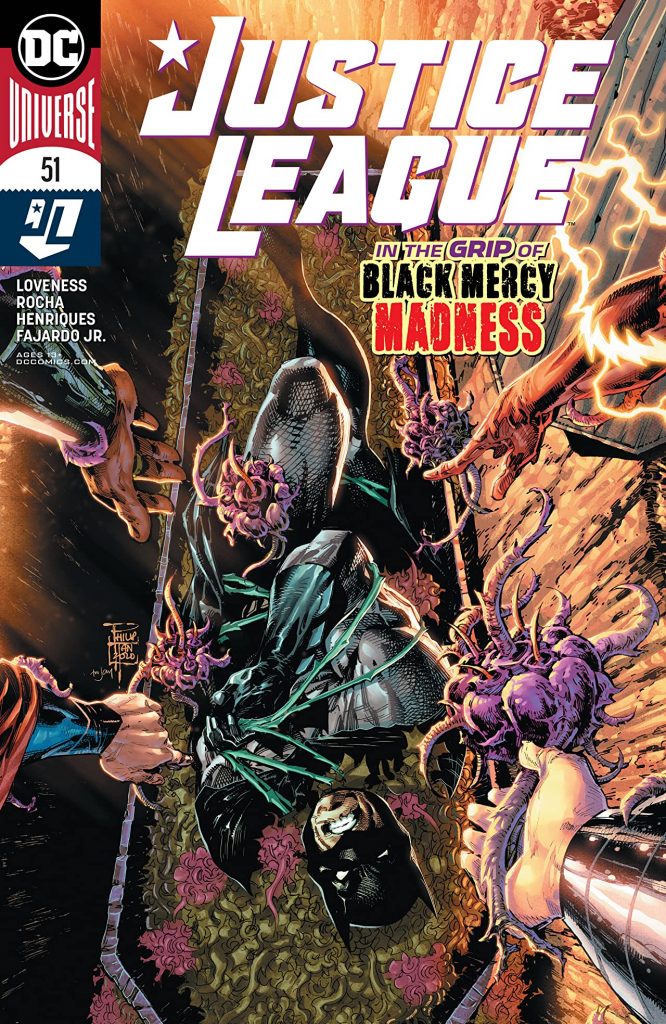 There is something different going on in this issue of Justice League. I don’t mean the same kind of “different” as the 3 issue mini-arcs we’ve been getting since Scott Snyder and James Tynion IV left the title. Those mini-arcs have felt almost continuity or timeline agnostic and disconnected from one another. Instead, Justice League #51’s “The Garden of Mercy” appears to pick up directly following the events of “The Rule of War” with the team traveling back to Earth through the void of space.

Before we join the league in their space travels, the opening pages of the book opens with the narrator asking the question “Do you remember when your life truly began?” accompanied by images of Batman, Wonder Woman, and Superman. We don’t know the identity of this narrator and we don’t know to whom they are asking the question but, almost immediately, something feels…off.

Jeff Loveness (from Adult Swim’s Rick and Morty) joins the title to pen a 2-issue arc focused on The Black Mercy, the alien hallucinogenic plant-life that first appeared in the classic Superman story “For the Man Who Has Everything.” Now, you might be saying “Garret, you said this felt different than the other arcs we’ve gotten but this sounds quite a bit like another short “filler” storyline to keep the title busy while other stuff happens in the DC publishing world,” and I get that. However, there are levels of mystery and darkness that we haven’t seen in JL in quite some time.

I touched on the mysterious elements already around the identity of the narrator and the subject of his/her questioning but that isn’t all that’s going on here. Throughout the issue, Loveness and penciler Robson Rocha present the reader with flashbacks (or apparent flashbacks) of our heroes’ pasts. A closer look at these images reveals something more interesting in that we aren’t just seeing images of the characters’ pasts, but seemingly also different realties; such as…

Zero Year’s Batman is perched on a gargoyle with his mask purposefully off to reveal Bruce’s buzz cut; a Dan Jurgens-era Superman battles Doomsday; a Golden Age Era-esque Wonder Woman sails from Paradise Island; Flash races to his skeletal remains in a Crisis homage; Morrison’s Batman gets blasted with Darkseid’s Omega Beams; and, the New 52 costumed JL flies into battle.

Pages 2 and 3 are a double splash page showing multiple versions of our heroes battling various cosmic threats from different storylines. These are specific choices in the presentation that must have been made for a specific reason. What is Loveness up to and how does it tie into a story centered on a reality-altering plant?

The bulk of the issue focuses on the heroes discovering that they haven’t traveled through space to arrive at Earth, but somehow have arrived at the Black Mercy homeworld (or some other world completely overwhelmed with giant Black Mercy flora.) Each character is confronted with the villainous plant until we learn the nature of the narrator (and to whom he/she is speaking to) in a stunning final splash page that will make you go back and reread the issue with that new knowledge in hand.

Robson Rocha has a lot of heavy lifting to do in this issue and he pulls off the task wonderfully. There are shifting art styles, costume changes, hidden details, panels absolutely stuffed with characters, and more. While the narrative is purposefully confusing, Rocha’s pencils allow the reader to move along nicely, switching from a fluid panel progression to kinetic disruption without warning. He has an angular and stylized approach through much of the issue which adds an element of unease in a story that intends to make its characters and readers question reality and feel the danger at play.

Overall, Justice League #51 is a highly engaging entry into the series which warrants multiple readings. It will be tricky to see how this set up pays off with only one more issue in the storyline, so we’ll see if the premise lives up to its promise, but this feels like an adventure that could have bigger implications than we’ve seen in this title for some time. – Garret Grev