SYNOPSIS: An unprecedented cinematic journey ten years in the making and spanning the entire Marvel Cinematic Universe, Marvel Studios’ Avengers: Infinity War brings to the screen the ultimate, deadliest showdown of all time. The Avengers and their Super Hero allies must be willing to sacrifice all in an attempt to defeat the powerful Thanos before his blitz of devastation and ruin puts an end to the universe. 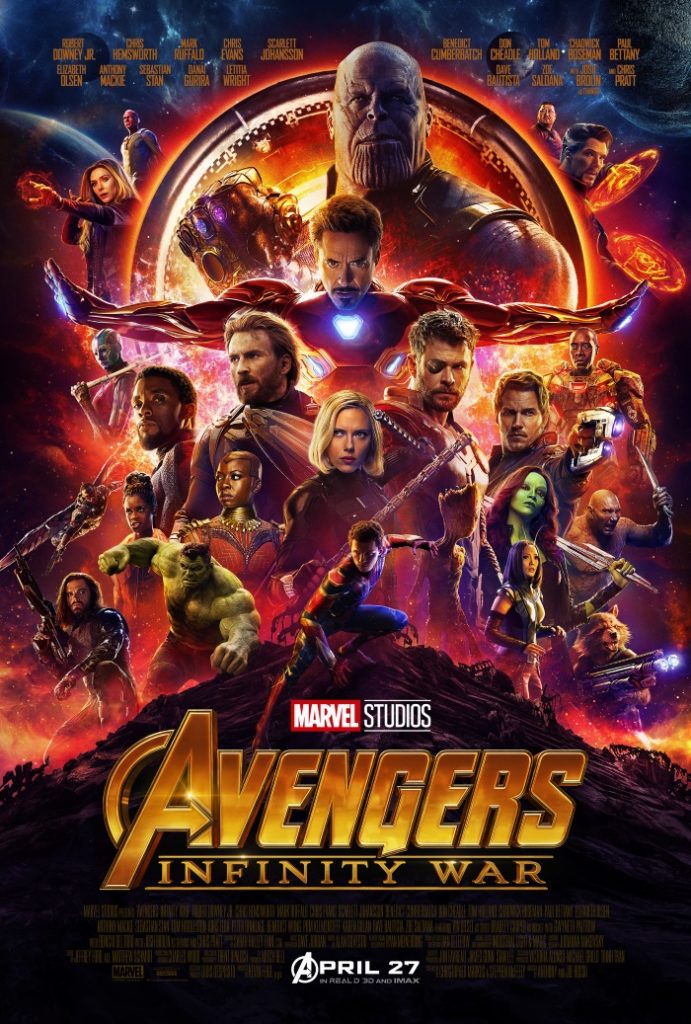 Avengers: Infinity War does indeed seem infinite, metaphorically. First of all, it’s long at 156 minutes. Secondly, the cast of characters seems to go on forever – 64 “main” characters according to Marvel. And lastly, the range of emotions required of the cast members, plus the range of emotions you are likely to feel, is considerable. Preview audience reactions varied from euphoria to dismay. Yep, it’s that kind of film!

The success of the Marvel Comics-based films has always been due to their exceptional cast members. This film is no exception. You have the Chrisses on board: Hemsworth (Thor), Evans (Steve Rogers), and Pratt (Star-Lord). Robert Downy Jr.(Iron Man) provides his usual snark while Tom Holland (Spiderman) provides his usual wide-eyed innocence. Zoe Saldana (Gamora), Elizabeth Olsen (Scarlet Witch), and Paul Bettany (Vision) bring some heart-wrenching pathos to the mix. Mark Ruffalo (Bruce Banner/Hulk) brings sincerity, while Benedict Cumberbatch (Dr. Strange) brings eccentricity and foreboding.

Peter Dinklage, ironically, portrays the giant Eitri, weapons maker to the gods. Tom Hiddleston stirs up some mischief as Loki. Sebastian Stan gives an elegantly understated performance as Bucky Barnes. Don Cheadle (War Machine) and Anthony Mackie (Falcon) provide some impressive aerial stunts. In fact, all of the stunts in the film as well as the special effects are spectacular.

However, the true main character may be Thanos (Josh Brolin), the villain of this story. I’ve always said that an action film is only as good as its villain. Brolin delivers a stellar performance of a conflicted tyrant. He seeks to restore balance to the Universe by destroying half its population using the Infinity stones embedded in the Infinity Gauntlet. The central conflict in the narrative arises from the Avengers’ collective efforts to prevent Thanos from acquiring all of the stones. Brolin, as Thanos, interacts with almost every character, at once brutal and pensive. He gives us a flawed, melancholy madman. As Mantis says, “Death follows him like a shadow”.

Why, you may ask, have I spent all of this time on characters? Easy answer – the less you know about the film’s unfolding, the better. Avengers: Infinity War is a sweeping, majestic masterpiece. The musical score by Alan Silvestri maintains the theme of conflict/contrast with moments that are powerful, yet haunting.

Anthony and Joe Russo have brought a stunning, portentous tale of life and death to the screen.  At times hilarious, heart-wrenching, gripping, and invigorating, your reaction will probably depend on how you feel about the various super-heroes in the Marvel universe. Me? Although I remained thoroughly engaged throughout the 156 minutes, I left feeling like I’d been punched in the gut. To drag up the old cliché, it’s an emotional roller coaster. – JoAnne Hyde