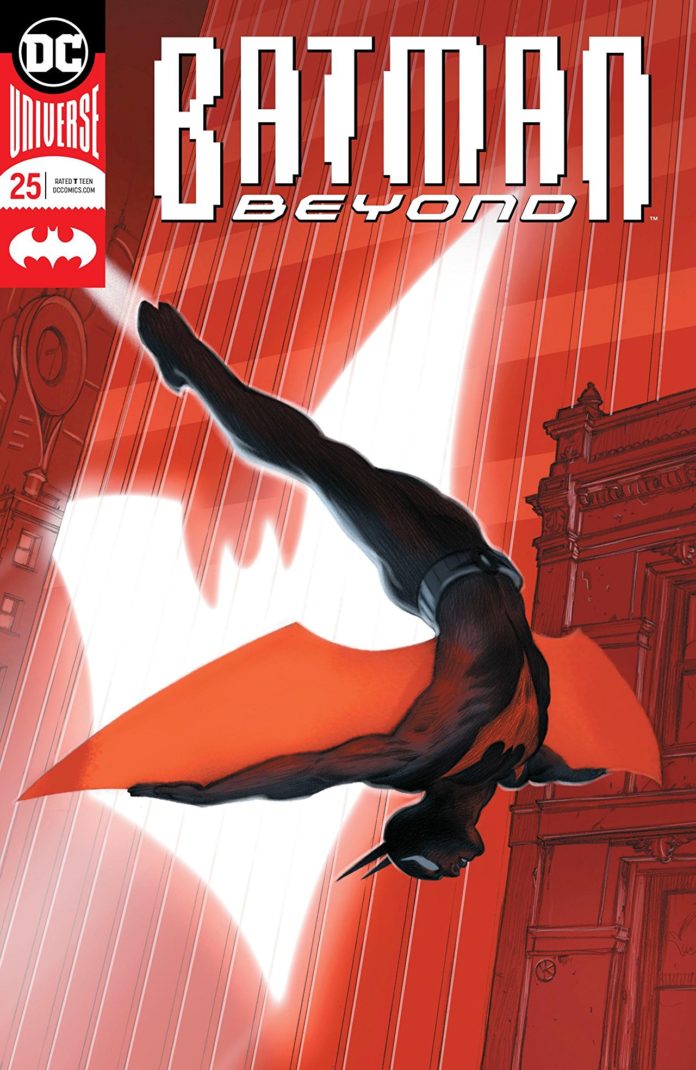 SYNOPSIS: In this special oversized issue, legendary DC scribe Dan Jurgens is joined by superstar artist Cully Hamner (Batman and The Signal) to bring back the biggest baddie of them all in “The Final Joke.”

The dedication of a new building commemorating a special Wayne family event-the 100th birthday of Thomas Wayne-brings out all of Neo-Gotham’s familiar faces, including one who was definitely not on the guest list. The Joker makes his long-awaited return to Neo-Gotham, and no one is safe! Will he strike at Batman, Robin, Commissioner Barbara Gordon or the original Caped Crusader himself, Bruce Wayne? Decades after his last fight with the Dark Knight, the Clown Prince of Crime returns home to take his city back once and for all. – DC COMICS

If anybody is looking for a “jumping on” point for BATMAN BEYOND, issue #25 is the perfect time to do so.

After the disappointing conclusion to the previous Scarecrow-centric arc, we begin this story with a slow burn that feels more like a prelude rather than a first chapter — not that that’s necessarily a bad thing. It definitely ends on a high note though.

We kick off this new story arc with some very special guest artists, Cully Hamner and Marco Santucci, as well as inker Val Staples. These guys work incredibly well together and I’d love to see them come back in the future. The juxtaposition of Neo-Gotham and Old Gotham is particularly effective. No matter how clean and technologically advanced things get topside, things seem to stay the same in Old Gotham, and lest Neo-Gotham forgets what it’s built on, it seems that there’s always just a little layer of filth covering the sheen of the futuristic, angular architecture.

One specific spread that showcases Hamner’s work is while Bruce is walking to the podium at the building dedication. We get to see a nice shot of many characters from the Batman Family (sans Azrael, much to my chagrin, it appears Tim Drake has been left out too–which is very odd especially considering his ties to Batman Beyond) as well as the big names from Batman’s rogues gallery. All of the character designs look fantastic. A few pages later is when the art switches to Santucci’s work. We’re treated to a more dignified looking Bruce and a beefier Terry. It’s not a shocking change, but it’s noticeable. I like both styles a lot regardless.

Dan Jurgens’ writing is picking back up after a lackluster last issue. Remember what I said about this being a “slow burn” type of issue? A lot of the action takes place in the past. We see Bruce and Dick in their New 52 costumes fighting The Joker on tankers full of laughing gas, and later on, Bruce’s new-and-improved crusade against crime after the Joker’s “death.”

The advent of an increasing amount of tech to Batman’s war could be seen by some as a bit of a crutch, but as longtime readers have seen time and time again, it doesn’t matter how much tech you have, if you don’t know how to use it and what to do without it, it’s useless.

Dick Grayson also makes an appearance as the mayor of Bludhaven (at least we know that future Dick is safe and sound while the terrible “Ric” Grayson stuff is going on elsewhere). It seems fitting that Dick would give up the fight against crime and live a normal life since his fight was always more about righting wrongs instead of using it as an outlet for his pain vis a vis Bruce.

Somebody has been killing the evil, yet largely ineffective Jokerz goonz, and the calling cards left behind leave no question as to who it is.

The Clown Prince of Crime in the flashbacks is what we’re all used to; like: maniacal, chaotic, and for lack of a better word, clownish.

The present-day Joker we see hiding at the dedication service is altogether more subdued and sinister, with only a hint of the darkest humor later in the issue.

Going forward, I think this can go two ways: Bruce vs Joker or Terry vs Joker. I’m hoping for the latter; we can only see an aged Bruce fight younger villains while a young, fully capable Batman waits in the wings for so long. We eventually need to see Terry come into his own as Batman; otherwise, the whole series is a bit of a waste. – Matt Whaley