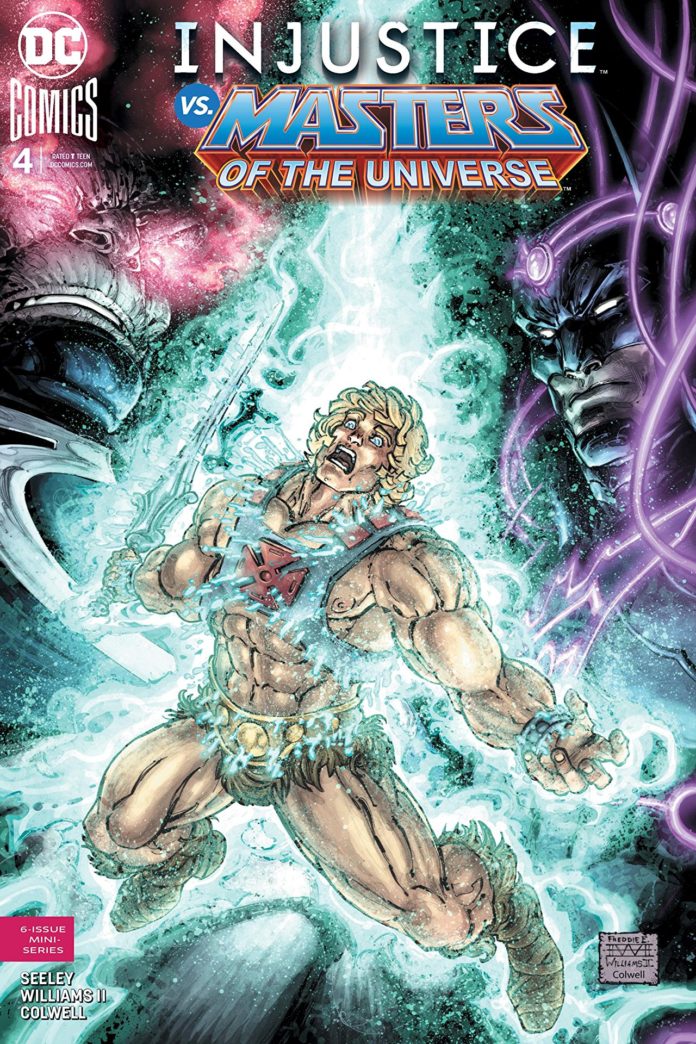 SYNOPSIS: Superman scoured the Multiverse for heroes who might threaten his rule—but he dismissed Prince Adam. Will he rue that decision now that he’s facing He-Man in the Oracle? Plus, Darkseid’s attack on Eternia has reached the walls of Castle Grayskull!

It’s Halloween and, in a comic book landscape full of “tricks,” Injustice vs. Masters of the Universe is here to serve up a delicious “treat” yet again.

Issue #4 bursts open mid-battle between He-Man and the Resistance force’s attack on Superman’s home base in Metropolis, with The Most Powerful Man in the Universe pitted in battle against The Last Son of Krypton. While Orko works to free Bruce Wayne/Batman from Superman’s mind control device and Skeletor faces off with Zatanna, the Heroic Warriors and DC’s heroes defend Castle Grayskull from and Darkseid and his army along with the Evil Warriors.

The stakes are continually raised throughout this issue, with multiple main characters seemingly meeting their demise and huge reveals as to what has pulled these two universes together. The story here is so well crafted that gently teased hints serve to dance on the edge of cluing the reader into his plans while allowing for the twists to have a remarkably satisfying impact. The best example of this relates to a character Superman says reminded him of He-Man/Adam and the transformation of Skeletor from decaying husk to a formidable force with a new source of power.

Tim Seeley and Freddie Williams II have elevated their work together on each issue of this six-issue limited series and their work has never been stronger than at the 2/3 point.

If you’ve read my previous reviews of this series, the things I loved are all still there and are even better. I’ll give a quick list to recap…

This book gets my highest recommendation. If you haven’t been reading to his point, go buy the back issues and get caught up. If you are a fan of either of these franchises or just highly enjoyable comics in general, you will not be disappointed. – Garret Grev

GRADE: A+, by the power of Grayskull!