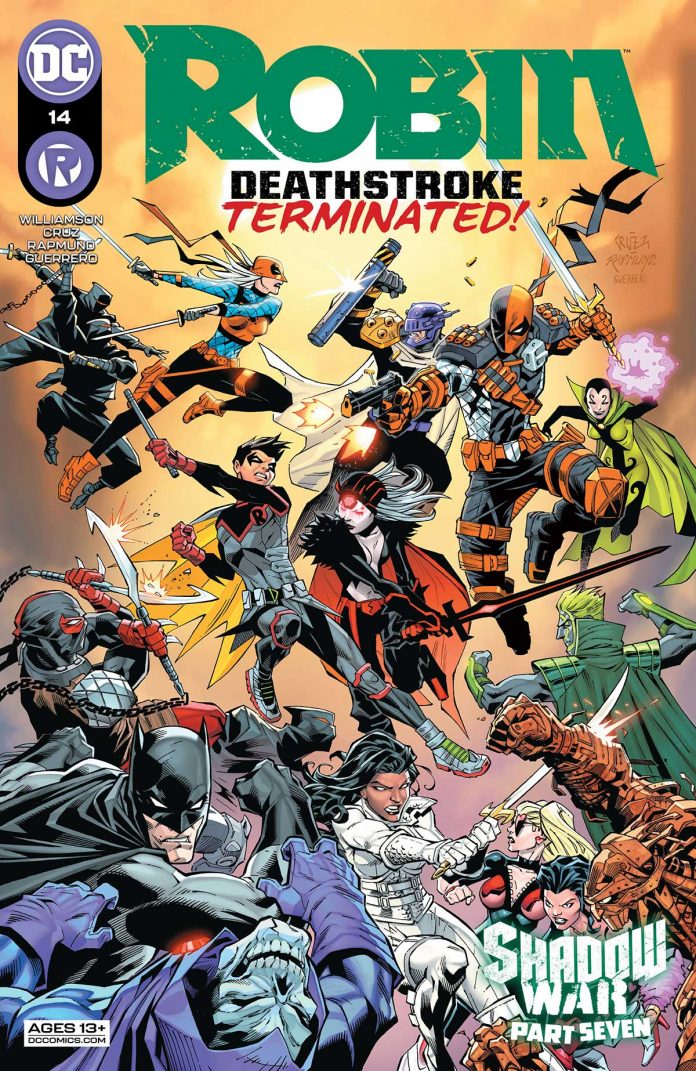 SYNOPSIS: FIGHT! Batman Inc. versus the League of Shadows versus the Secret Society! Deathstroke versus Talia…and only one will walk away from the fight alive! Robin knows the truth behind Ra’s al Ghul’s death and races to stop the Shadow War!

“Shadow War, part 7” brings together the three factions for what could be their final conflict!

Williamson showers the reader with equal parts action and character beats as this storyline reaches its penultimate installment. Throughout this title, Williamson has done a tremendous job balancing the fights with character-driven moments, often weaving them together. This issue is no exception as we get some great scenes between Bruce and Damian and later between Talia and Deathstroke. Both are tragic in their own ways.

I have to empathize with Damian in his struggle with his father. He keeps running into an emotional brick wall when it comes to Bruce, but Williamson finally gives Bruce a minor breakthrough. He’s said some pretty awful things to Damian, even kept him at a distance, all of which have led to Damian keeping his own wall up when Bruce finally shows some empathy towards his son.

It was nice to see Bruce try and take the burden of Alfred’s death off of Damian. The poor kid needed to hear it, but that swung the pendulum the other way, with Bruce not wanting Damian to get hurt in battle. I totally get his feelings about wanting to protect his own son, especially in the wake of Jason’s death, Damian’s death back in the New 52, and Alfred’s death, but if any Robin can take care of himself, it’s the one who’s the son of Batman that was raised by the League of Assassins. I loved the moment when Damian commits himself to the mission by jumping out of the Ghost-Stream without a parachute, leaving it up to his father to catch up to him and get them both onto the ground in Nepal safely.

Another great moment for Damian was reacting to the apparent death of Respawn. He may have hated him in the tournament, but you could see the immediate affection he was feeling towards his clone-brother and now he’ll not get the chance to make something out of that relationship.

Of course, that loss of opportunity is what spurs Deathstroke as he battles Talia. He tries to throw her off her game by striking psychologically as well as physically, but Williamson lets Talia’s prowess shine. She’s a dangerous opponent and I’m glad Williamson showcases that, aided by the art of Cruz.

Cruz’s art is good here but didn’t take my breath away. I really liked how he portrayed the faux-Deathstroke and the ending to the real Deathstroke’s fight with Talia. As with comics, especially ones with Lazarus Pits, you have to wonder how much will stick, but Cruz made things entertaining enough.

Williamson announced that he is leaving Robin with #17, meaning we’re getting into the home stretch of his run. His time on the title has certainly enriched my appreciation of Damian and I’ll be sad to see him go. This particular outing ends on a cliffhanger, one that makes a lot of sense, but is shocking at the same time. I can’t wait to see the conclusion in Shadow War: Omega! – Javier E. Trujillo

BOFSH 52 | The Latest on THE BATMAN, Robin, Fantastical Villains!