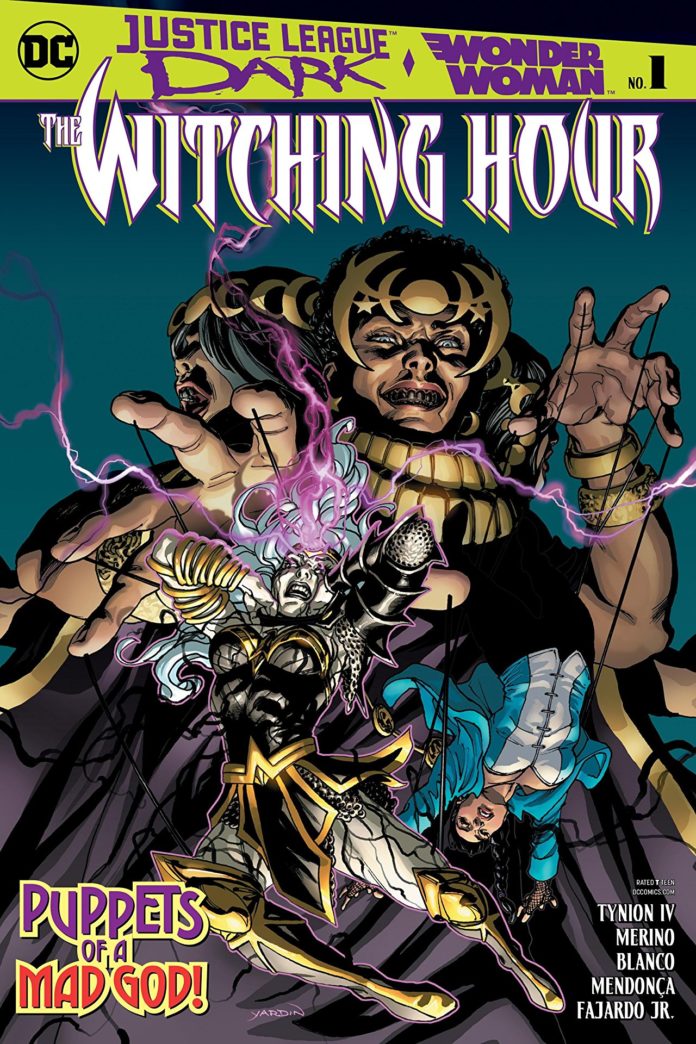 SYNOPSIS: Just in time for Halloween, it’s “The Witching Hour,” a five-part weekly event that will rewrite the future of DC’s magical heroes!

Hecate, the witch-goddess of magic, always knew a day would come when the monsters she stole her magic from would return. Now she must activate the Witchmarked, humans within whom she secreted vast stores of power. And the most powerful of the Witchmarked? Wonder Woman!

In 2 Corinthians 5:8, the Apostle Paul tell us that to be absent from the body is to be present with the LORD.

Last week, Tynion let us know that, contrary to St. Paul, to be absent from the body is actually to be washed up on the shores of the Witch’s Moon, a metaphorical location represented as physical reality where Wonder Woman’s consciousness is kept at a safe distance from her body so Hecate can use said body to destroy the world of magic and rebuild it in her own image.  It was one of the more intriguing premises that Tynion has come up with thus far.  And this week we get the final chapter in this story arc.

But before we dive in, Happy Halloween!

We’ve reached the end of the “Witching Hour” storyline, and instead of ending with a bang, we’ve left on a whimper so soft, it is virtually inaudible.  This entire narrative has been impossibly frustrating.  On the one hand, writer James Tynion IV manages to create interesting (even compelling) ideas every couple of issues, but on the other hand, he bogs the whole shebang down with crazy amounts of unnecessary exposition and wordiness.

This issue is no different; in fact, it may very well be the shiny golden centerpiece of Tynion’s outrageous expositional debacle.  Here’s the problem: Tynion insists on telling us about the story instead of simply telling us the story.  This entire “Witching Hour” run has felt like an outline for the story that could have been, but simply never came to be.

At its basest level, I can’t help but feel that it comes down to passion.  I feel zero passion from Tynion.  That lack of care and attention leaves a miserable imprint on the reader; or more accurately, it fails to leave any kind of a mark at all.  With nearly every issue in this series, I’ve turned the last page and taken nothing away.  Occasionally a compelling image will linger, but at no point has any element of this story remained in my thoughts for more than a few moments.  There’s just…no substance to be found here.

And I’ll say it again: the characters are utterly wasted.  For those of you who have been following his narrative, can you tell me why Tynion decided to include Man-Bat and Detective Chimp?  I can’t either.  This is Wonder Woman’s show, and while that isn’t necessarily a bad thing, the title of the comic is Justice League Dark, not Wonder Woman Dark.  If you don’t want to use these characters, why in the world did you pick them for your story?  You’re doing the characters, and us, a disservice.

The art in this issue is juggled by three pencilers (Jesus Merino, Fernando Blanco, and Miguel Mendonça), and one man on colors, Romulo Fajardo Jr.  While the art is good, the mishmash of styles is evident and sometimes distracting.  Though very serviceable, the art is not good enough to warrant picking this issue up on its own merit.

I’m sad to have to end it on such a downer note.  This entire journey has been a rather lackluster affair, and the conclusion to “The Witching Hour” doesn’t add anything positive; it is a dull slog and Hecate’s origin is so unbelievably shoehorned I can barely breathe.

It’s fitting that this storyline is wrapping up on Halloween.  It’s horrifying.  Just for all the wrong reasons. – John Funderburg

THE BATMAN | “The Bat and The Cat” Trailer Breakdown