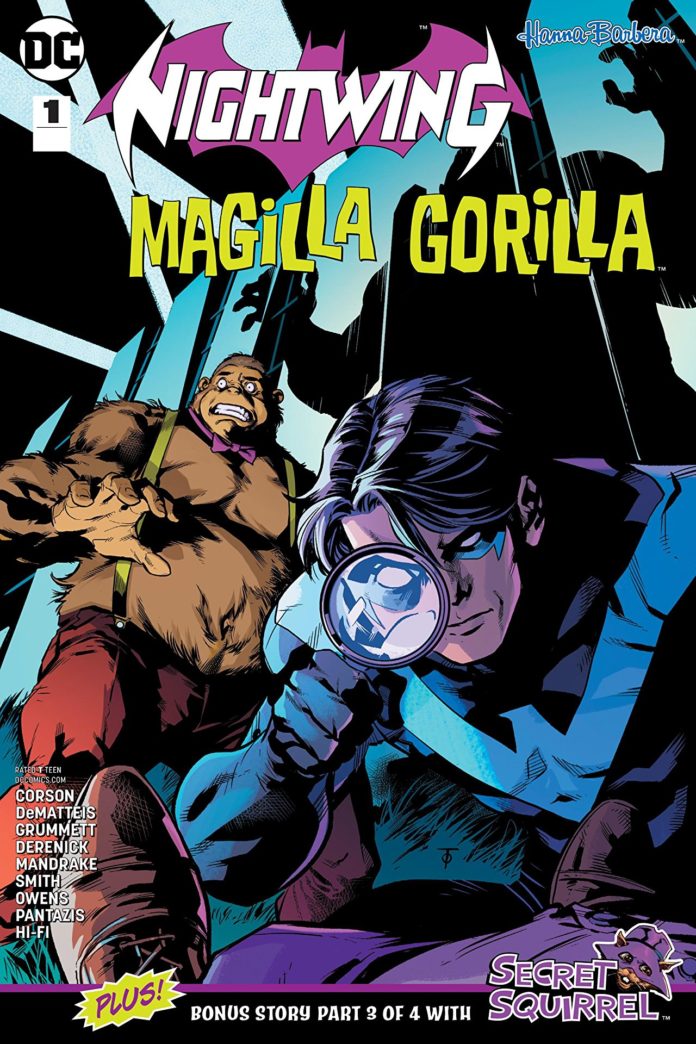 SYNOPSIS: When a famous Hollywood talent agent is found brutally murdered, suspicion and evidence seem to point to his most famous client, Oscar-winning actor Magilla Gorilla. Dick Grayson, already in Tinseltown to meet with said agent, senses something suspicious. Donning his Nightwing costume and joining forces with the simian suspect, he’s got one night to prove that this monkey doesn’t belong in a cage. Plus, part three of a Secret Squirrel backup story written by J.M. DeMatteis.

From afar, I’ve appreciated these Hanna-Barbera/DC Comics crossovers, but this is the first one that I have read.

Being the resident Nightwing guy I wanted to be thorough!

Having watched my fair share of Cartoon Network back in the day I’m familiar with a lot of the modern and classic Hanna-Barbera shows (Scooby Doo, Secret Squirrel, SWAT Kats, Johnny Quest). But for the life of me, I had not heard of Magilla Gorilla.

That lack of knowledge made this just an OK read for me.

After getting multiple calls from Mel Peebles, Magilla’s manager, Dick Grayson flies out to Hollywood where Magilla is a successful actor whose comedies and action films have been box office sensations. He has even been nominated for an Oscar after playing Teddy Roosevelt in “Rough Riders.”

Grayson is already a fan of Magilla’s movies and gets to be a happy fan for a while until it’s revealed that Magilla wants to make a film about the Flying Graysons and portray Grayson’s father.

Grayson disapproves, and last sees Magilla having a loud argument with Peebles, who is later found dead at a popular restaurant.

What unfolds is a pretty basic Hollywood mystery story where Nightwing and Magilla investigate whether a jealous actor or upset relative framed him for the murder.

The issue has worthwhile moments, like when Nightwing and Magilla bond a bit over how they try to get along with family despite a falling out (in this case Nightwing’s storied disagreements with Batman and for Magilla staying in touch with his estranged sister).

There’s also a passing reference to Batfleck’s muscled-out look as Nightwing and Magilla enter the Warner Bros. lot with Magilla dressed up in a Batman suit. The guard mistakes Magilla for “Mr. A” and lets them pass.

Inside jokes like that are what I wanted to see more of as opposed to a Hollywood murder mystery.

All in all, it was nice to finally read a Hanna-Barbera/DC crossover. Next time I’ll just have to try out an issue that’s more up my alley.

Speaking of which, if this crossover series keeps going I’d like to nominate a Swat Kats/Cyborg story. Cats flying a fighter jet against a man fused with alien tech? That’d be pretty boss. – James Armstrong