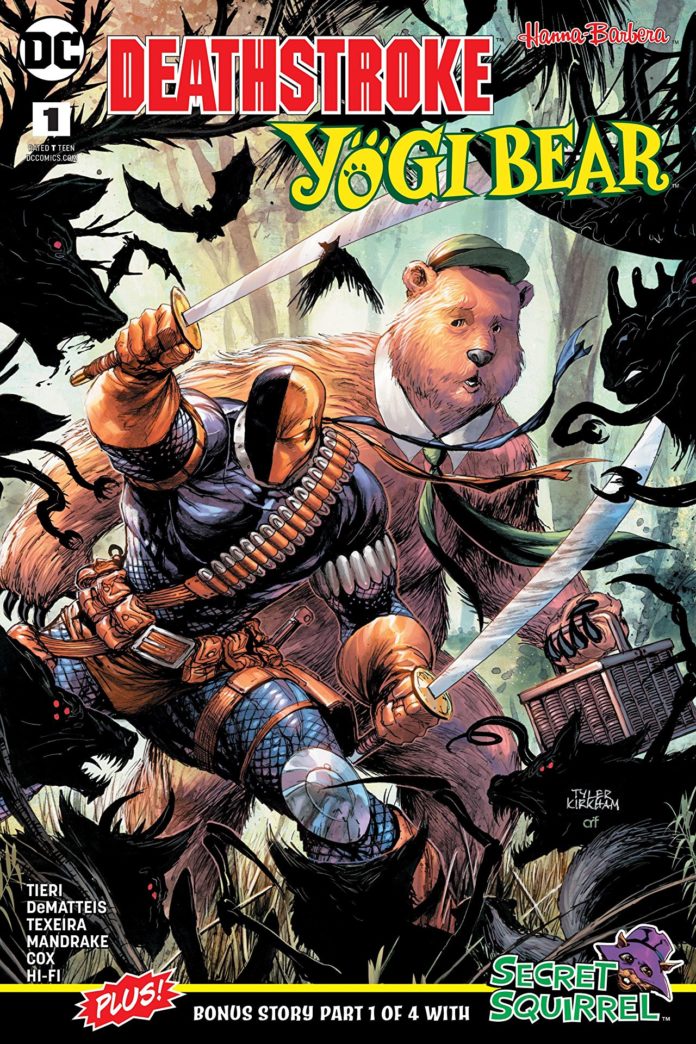 SYNOPSIS: In Yellowstone Park, legends speak of a spirit bear referred to as “the Yogi,” which few if any have actually encountered. Real or not, when a bear seems to have graduated from stealing picnic baskets to kidnapping actual campers, Ranger Smith decides it’s time to stop this menace—so he calls on the services of Slade Wilson—a.k.a. Deathstroke—to get the job done. Plus, part one of a Secret Squirrel backup story written by J.M. DeMatteis

DC Comics is mixing things up once again. Recently we have had two volumes of DC Comics headlining with Looney Tunes.

Now Hanna-Barbera is venturing into the DC Universe.

Deathstroke and Yogi Bear don’t seem like characters who would often cross paths, this is an Odd Couple-like scenario that we have never seen before. Writer Frank Tieri does an interesting job pairing up the world’s deadliest assassin and a picnic basket’s worst enemy.

I wasn’t sure what to expect from this story full disclosure. Outside of Batman/Elmer Fudd and Joker/Daffy Duck, I haven’t been a fan of these cartoons-meets-comics mashups.  The heart of the story is Yogi, Boo-Boo has gone missing and something right of Resident Evil is happening to the animals of Jellystone Park.

Yogi hires Deathstroke to find Boo-Boo as the two go on a wacky adventure.  This issue does bring back memories of 2015’s Bizarro, when Bizarro and Jimmy Olsen went across the country or even, Todd Phillips Due Date from 2010.

It’s an odd pairing but lighthearted in nature.  Deathstroke does at times feel out of character and more of a drastically toned down Deadpool.

Yogi and Jellystone are the best parts of the story. While reading, you will get flashbacks of watching Yogi on TV, they almost had me hankering for a Yogi monthly book.

Yogi and his world seem like a fine place for Tieri after reading his Harley Quinn run.

For this oversized issue, Mark Texeira provides the interior artwork.  Texeira does a superb job on this book! Lots of great Yogi stuff to pick from.

The chase scene in the beginning of the book is my favorite part of the issue. The details Texeira put into Yogi and Boo-Boo is a thing to behold.  From how the ties sit around their necks, to the little things like their fur, just a wonderful job creating a realistic look to the bears.

Deathstroke’s action panels are the best we see of the character in the issue.  Deathstroke gets himself into an action-packed bar fight and is right at home when it comes to taking down deranged wildlife. Proving that the world’s greatest assassin is a pretty good hunter as well.

I will say I like my Slade Wilson a bit more weathered. Texeira’s Slade Wilson looks a bit younger and more exuberant than I am used too, minor nitpick.

The book has its moments and some genuinely funny parts with Yogi. It just feels a bit forced to put these two together.  Deathstroke seems a bit off when he’s not in combat and it did take me out of the issue at times.  You can see the influence of both Harley Quinn and Deadpool in the book. I just don’t think that tone works for Deathstroke.

Mark Texeira’s artwork is the highlight of the book with his take on Yogi and crew. This isn’t the best crossover I’ve read, but I wouldn’t mind adding a Yogi book to my pull list if one came out. I would totally give that a shot with this creative team.

PS: Do not sleep on the variant cover for this issue. Paolo Pantalena and Arif Parianto have created a beauty.  If you have ever wondered what a ferocious juiced up Yogi Bear looks like check this cover out! – Pete Verra