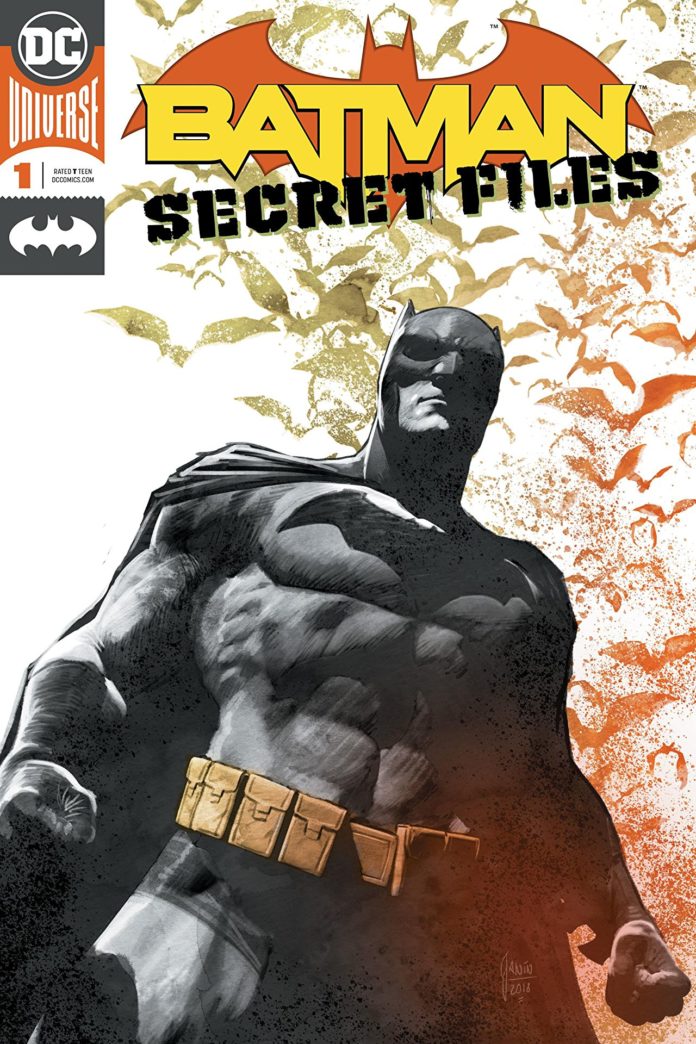 SYNOPSIS: Delve into Batman’s case histories and discover brand-new stories by some of comics’ most exciting talents. The BATMAN team of Tom King and Mikel Janin provides a framing sequence, setting up our hand-picked teams of creators to take a look at Bat-mysteries past and present. Featuring a bevy of Batman villains, including a look at how the Scarecrow’s fear toxin affects the common man, and a special story written by Tom Taylor with art by Brad Walker that teams The Dark Knight Detective with Detective Chimp.

First off, I’m not sure whether or not this will be a continuing anthology series, and I couldn’t find confirmation online. I assumed it would just be a one-shot, but the first two stories are left with the door open, particularly the opening three-pager from Tom King and Mikel Janin. Perhaps this bit will pick up in the pages of the main Batman title?

The five stories contained herein are essentially standalone, but most share a rather bleak outlook and feature Batman dealing with some personal lows in the wake of his broken engagement to Catwoman. The second story here from writer Ram V and artist Jorge Fornes features a scene told from the perspective of a cop under the influence of Scarecrow’s fear toxin, and his altered vision of Batman is pretty rad. Another story finds Batman in a cabin in…the snowy mountains of Gotham? Hmm, didn’t know those existed. Anyway, the setting provides an opportunity for Batman to breakout a pretty nifty winterized version of his costume, courtesy of artist Jill Thompson.

My favorite story of the bunch is the last one from writer Tom Taylor with the art team of Brad Walker, Andrew Hennessy, and Jordie Bellaire. It co-stars Detective Chimp, and… well, if that doesn’t sell you I don’t know what will! The pairing naturally creates a fun dynamic of two brilliant detectives with different personalities and worldviews. Also, one is a statuesque Adonis of a man disguised as an otherworldly creature of the night, while the other is a chimp with the sharp fashion sense of a 1950s private eye. Brad Walker’s art stands out in this issue. His faces are expressive and his figures are alive, with ample attention paid to the details and a great balance of blacks for the shadowy world of Gotham.

Taylor writes some witty and charming dialogue for the two while crafting a story with a lot of heart and unexpected emotional depth. It’s thematically reminiscent of Lee Bermejo’s Batman: Noël, and it’s something that I really like to see every now and then in Batman stories. It’s always fun to experience Batman beating up on some no-good thugs, but the reality of crime is sadly not as simple as bad people doing bad things, and that reality tends to conflict with the basic appeal of superhero/vigilante fiction. Taylor gives Detective Chimp a nuanced view on crime that forces Batman to look deeper than his often black-and-white stance. I always appreciate when a writer can bring out a sympathy in Batman that belies his outwardly intimidating facade. Sometimes it takes a very smart ape to remind him that he’s in this game to help people. – Rob Veatch III