SYNOPSIS: The cat’s out of the bag! Everyone at Snowflame’s auction is there for the same thing: the list. But what is the market value of a list containing all the intel the world’s greatest crime-fighters have on super-villains? And who exactly is on the list? You’ll have to ask Catwoman to find out! 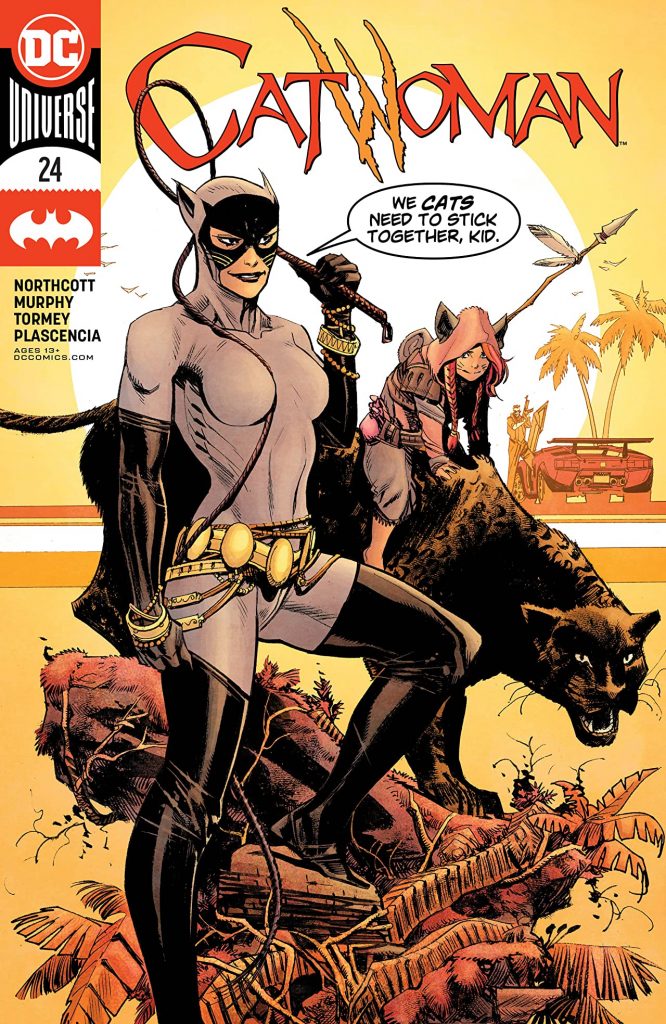 Drugged, spear-pierced, and all alone in the deep, dark jungle, Selina is docile and wholly at the whim of Isla Nevada’s natives.  But fear quickly turns to sympathy when Selina hears the firsthand account of the tragedy that has happened to these people.

Under the guise of protection and societal “advancement,” the island’s denizens have been cruelly subjugated by Snowflame.  They now live as slaves.  As Selina is nursed back to health, she realizes that she could play an integral part in wiping out Snowflame’s heinous oppression.

And then there’s that matter of the great big diamond and blackmail list that were up for auction.  She wouldn’t want to forget about those…

Sean Murphy and Blake Northcott’s Catwoman yarn spins to a close this month, and I have to say, I’m not at all disappointed.  It wasn’t as strong as the last issue, but it is still a great deal better than Joëlle Jones’ closing arc a few months ago.  My only real complaint would be that the ending feels too abrupt.  I would have liked to see this storyline be able to breathe a little bit and arc over three or four issues, instead of just two.  I hope this team is able to revisit this character in the future because they’ve put together something intriguing here.

Cian Tormey finishes what he started last month for art.  While this issue didn’t feel as dynamic or cinematic as last month’s, there are a few fantastic moments.  Any time the giant panther Kisin shows up, especially when she’s found prowling through Snowflame’s mansion, was darn cool.  And there is a full-page image of Snowflame near the end that is marvelous and laugh-out-loud funny.  The colors by FCO Plascencia amp this page up to gnarly extremes, and the rest of the pages, infused with purples and violent pinks, make the book fun to flip through.

Give this one a shot this month, especially if you enjoyed the first part of the story (I know I did)! – John Funderburg