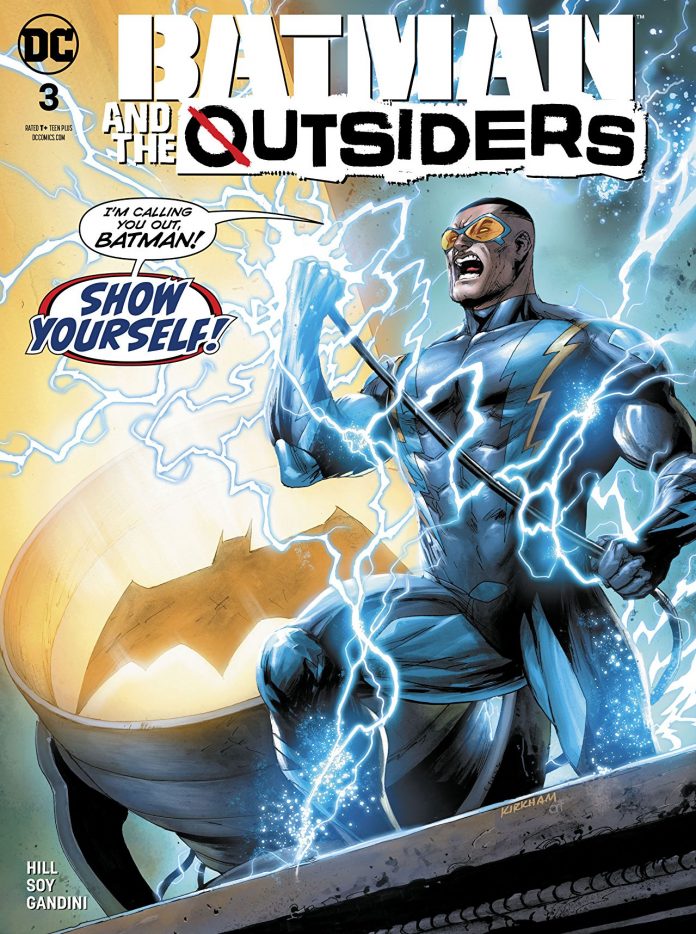 SYNOPSIS: In their first encounter with the powerful maniac who’s pursuing runaway meta-human Sofia Barrera, Black Lightning and the Outsiders were absolutely humbled. Does everyone on this team have what it takes? Or did Batman make a catastrophic mistake when he entrusted them with Sofia’s life?  Plus, ousted from power and stripped of wealth, Ra’s al Ghul is a broken man. But Lex Luthor has a plan for how the Outsiders could be Ra’s’ new League of Assassins!

That is what every single character in this issue uses to deal with situations.

Ra’s Al Ghul has captured Sofia and is using his special brand of training to indoctrinate her into his League.

As a result, the Outsiders failed to save Sofia, and The Batman has decided the team needs training…to face off against him.

Of the three issues, this is the most Batman has appeared in the book. Personally, I think the limited appearance of Batman is a good thing. His name is in the title (because that’s not a bad way to move product), but the book has been better served focusing on this team. He works well as this team’s Bosley (Charlie’s Angels), give out the assignment and get debriefed in the end. Here he decides to test the team against himself. That mostly takes the form of Signal being attacked, alone, by Karma. After seemingly using Signal as bait the rest of the team defeats Karma, who is revealed to be Batman for this exercise.

The ending of this came off more cordial than I expected. Batman has repeatedly said this is Black Lightning’s team, so for him to take over with the directs orders made me believe BL would take issue with it. It turned out the whole exercise was a way to get Signal he needed help dealing with the fallout of the original Karma confrontation. I just thought there would be more seeds to what seems to be an obvious confrontation about who really runs the team.

On the other end, Ra’s uses Ishmael’s power and Sofia’s hatred to lure her into his clutches, ending with Sofia deciding if she will join him. The length’s Ra’s is going to woo Sofia indicate that he has major plans for her. The story gives no clue as to what those plans are, but it further cements how important she is to the future of this story.

One last surprise is in store when Ra’s receives a message from Lex Luthor about an opportunity. Luthor showing up in a Batman book should be a big deal, but we’ll have to see where that goes.

The issue didn’t give me the Black Lightning/Batman confrontation the cover sold me on, but it does a nice job of subtly continuing the intrigue. It always finds a way to keep it all entertaining. – E. Chad Metz

Should Robin be Introduced in THE BATMAN?