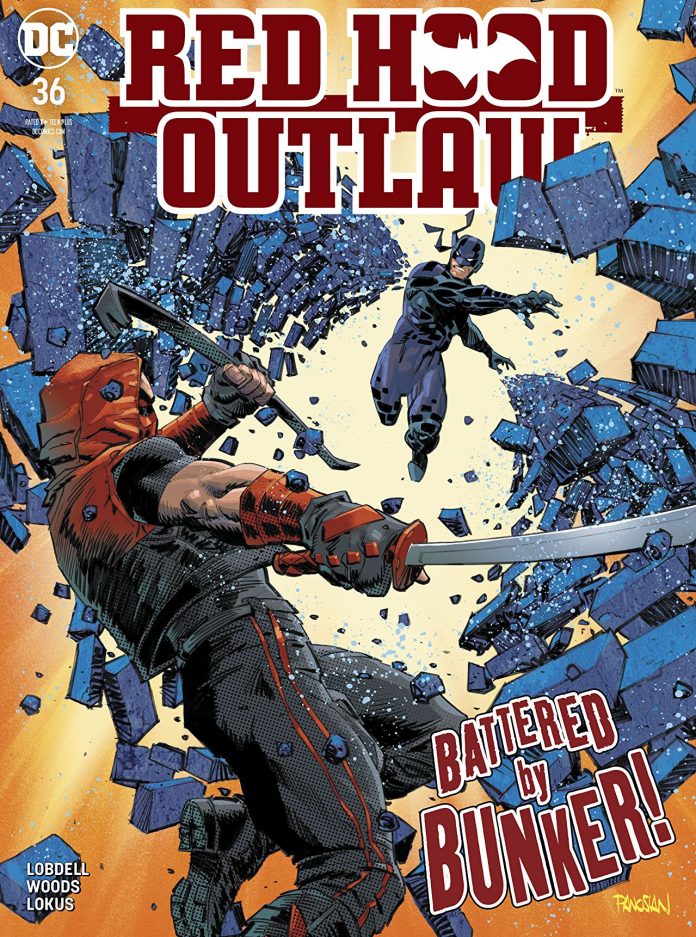 SYNOPSIS: There’s no way to plan for every contingency…even for a son of the Bat like Jason Todd. His goal was to take down the Penguin and assume his role as the Prince of Gotham, but the best-laid plans go awry when Oswald Cobblepot gets the last laugh and the last bullet! And not even the Red Hood and his posse can stop him. (How could they with the Iceberg Lounge under siege and Bunker, Wingman, and the Sisters Su too busy to help Jason deal with a Penguin ascendant?) Don’t miss the startling conclusion to “Prince of Gotham!”

Jason Todd has been on a strange ride to the top of Gotham and now he has to face the consequences of that rise. One of those consequences is a somewhat memory addled Oswald Cobblepot, aiming to kill him…once Jason reveals what hold the Red Hood has over him.

That’s right, the Penguin has a bullet sized hole in his memory since the Red Hood shot him point-blank in revenge for what Penguin did to his father. Holy Lucky Break, Batman! Jason’s dual identity is safe, although how being Jason Todd, ward of Bruce Wayne AND employee of Red Hood doesn’t still spell trouble for Bruce, I don’t know.

Woods sets up this showdown well, with his typical widescreen panels, using splash pages when the action really counts. The first six pages could easily be storyboards for a movie, they’re that cinematic. The flashback where Jason recounts firing into the Penguin’s monocle is especially horrendous as Woods pauses the action just mere milliseconds after the bullet has left the gun and found its mark.

What Lobdell does well here is bringing all the different elements together and reveal what Jason’s master plan was all along. Having missed out on some of the most recent issues, I was unaware of some aspects, but I appreciated how there was more to Jason shooting Cobblepot. It was almost elaborately Batmanish, if it wasn’t so Machiavellian. It’s a little far-fetched how Jason could precisely predict how a monocle would shatter, but sometimes you just have to accept and roll with it. Your mileage may vary, though. I’ve been watching a lot of Batman ‘66 lately and this seems like a modern, dark version of something ridiculous that would’ve happened on that show.

Tying up the loose ends leads to some nice character moments and a shocking revelation or two, at least for this Red Hood neophyte. I was surprised with whom Wingman turned out to be, but it all makes sense given the places and themes this run, and this arc in particular, have gone to. I’m not sure when Jason acquired a dog, but I love that her name is “Dog”. There’s something sad about the abandoned Jason not being emotionally connected enough to give a dog a name. That is, I’m assuming it’s an act of emotional self-defense, having missed how she actually came into the story. I’d love to hear the rationale behind it.

Lest we forget, it’s the “Year of the Villain” and this title ties in with “The Offer” aspect of this storyline. Lex is there to make Jason an offer he can’t refuse. One thing I’ve enjoyed about this title is how it has pushed Jason’s characterization forward. It’s pretty convoluted, especially with how Grant Morrison tried to cram in aspects of his backstory, but this title has really been about the evolution of Jason Todd. Odds are he’s going to seize the opportunity Lex is presenting him with as a way to get on the inside, but there’s still a little bit of doubt about what Jason’s intent will be. Suffice to say, I’m looking forward to seeing who gets added to the cast of this book. I just don’t plan on getting too attached to them.

Red Hood: Outlaw #36 is a solid little book. Jason continues to be an interesting character, who at times is compassionate and others cold and cruel. Pete Woods delivers some exciting compositions and Lokus makes the Gotham night sky feel alive with his coloring. Now bring on Bizzaro and Artemis in the annual!  – Javier E. Trujillo