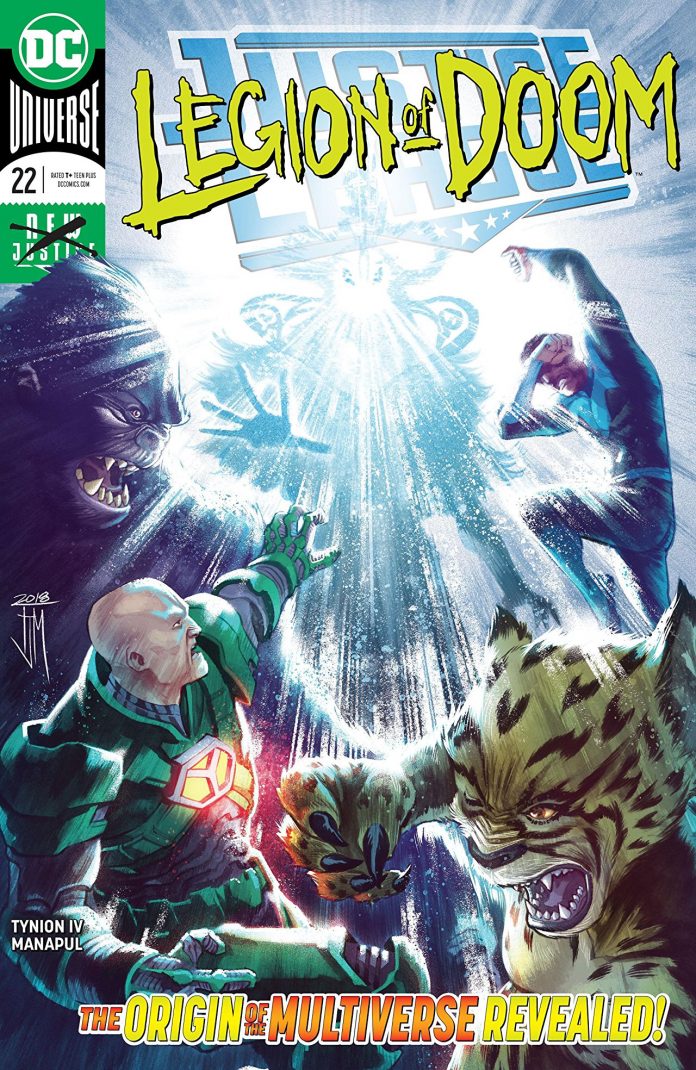 SYNOPSIS: The Multiverse is teetering on the brink, and Lex Luthor’s Legion of Doom is poised for victory. But as the combined intellects of Brainiac and the world’s smartest man make their move toward conquering the keys to the sixth dimension, a much bigger power grows on the horizon. At last, the final form of Perpetua takes her shape, and the DCU will never be the same again!

Hey everyone. I feel like I just need to say something before we get to the review of this issue itself, OK? Here it goes…

I feel like I’m responsible for some of what’s not so great in this issue.

I know! It sounds crazy, right?! Surely the creators over at DC aren’t reading my reviews and then sitting around going “Ok everyone, you read what Garret thought last issue. Now start getting to work!” It’s just silly.

Ever since Justice League Annual #1 I’ve sprinkled a bit of criticism in my reviews that I didn’t feel like we were getting enough progression or information on Perpetua, her connection to the multiverse and its nature, and the original purpose of the Source Wall. I went as far as to say that I thought last issue’s pages dedicated to Mr. Myxzpltk’s attack on reality should have been left out in favor of moving those aspects of the storyline along.

Well, in Justice League #22 James Tynion IV and Francis Manipul serve up a big, heaping plate of Perpetua and all the backstory you could ever ask for. Plus, the narrative purpose behind Myx’s undoing of reality and the remaining Justice League member’s attempt to stop him.

Just as Myx is about to undo all of existence and leave Mera, Starman, and Jarro contemplating the evacuation the 4th dimension, the Legion of Doom show up to SAVE THE DAY WITH THE HELP OF BAT-MITE?! What is going on here? I can’t tell you how fast I’d jump at the chance to buy a giant-sized issue focused solely on Mr. Myxzpltk and Bat-Mite in an all-out Imp vs. Imp Battle Royale! Unfortunately, this is the exact moment that the remainder of the issue shifts into flashback mode and lays out Perptua’s role as mother of the World Forger, the Monitor, the Anti-Monitor, and the DC Multiverse some 20 Billion years ago.

The details here are long awaited for readers of this series, so I don’t intend on going too in-depth on what is revealed. Tynion seems to have something to say about the negative consequences that can occur when people (elemental beings?) act outside of their given roles and responsibilities. Perpetua’s role of creator of the multiverse should have concluded following her act of creation, the Monitor initiates a devastating chain of events following his peering into other multiverses than what he was created to monitor, and the Anti-Monitor turns from brother to sworn enemy when those events take away his reason for being.

The issues I have with Justice League #22 are not the ideas and details of the story it tells, the problem is how the creators have chosen to tell them. This is A LOT of backstory. It’s dense and complicated and existential and quite frankly too much when served in one issue. There is arguably nothing more complicated in all of fiction than the DC Multiverse and this broader storyline has been at work for well over a year at this point. It’s the origin and the story of its creator would have been better served by spreading out this information over the past issues that seemed to have room to give.

Now, the last issue I complained a bit about the Mr. Myxzpltk stuff, and now here I am wishing we would have gotten more of that and less of what I wanted then. Silly me. Still, what Tynion has delivered here is almost too dense to enjoy. He’s a more than capable writer, but one of his weaknesses is letting the ideas and words run away with themselves while losing a bit of narrative control. That’s on display here, but I’m assuming that this structure was a bit of an editorial decision as well with Tynion playing the best hand he was dealt. Again, there is good stuff here (genetic cross-breeding of species with the goal of weaponizing human/martian hybrids among them!) but with so much going on the characterization of Perpetual and her sons suffers; they become words that drawings say instead of allowing us to more closely understand why they take the actions they do and why the multiverse is still paying for them.

The pencil work from Manipul is strong, but not so strong that you don’t miss Jorge Jimenez’s outstanding work from the previous issues. His decision to color this story, which should be vibrating with creational and destructive energy, in a muted color palette of blues, purples, greens, and yellows also feels off. The pages all seem to melt into one another and for such a dynamic story they don’t pop off the page well.

The issue certainly can’t be missed by anyone following Justice League and the larger narrative. The subject matter will be required reading going forward and there is enough good here to enjoy the issue itself. Still, the information dump is too much, the awesomeness of an Imp vs. Imp battle is far too brief, and I’m left wondering how future issues will affect my appreciation of this issue instead of simply enjoying it on its own as much as I have the previous installments. – Garret Grev