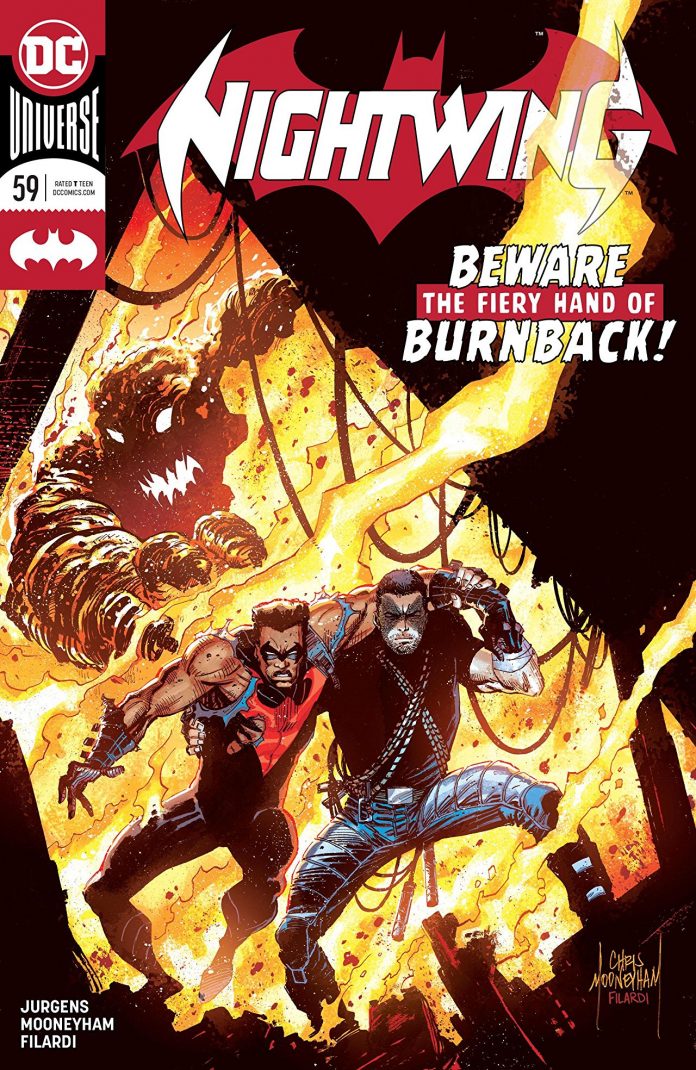 SYNOPSIS: There’s a new team in town who will have to learn the hard way that fighting injustice doesn’t mean you’re cut out to be a superhero. As the newly formed Nightwings are forced to deal with a fiery threat they never saw coming, reluctant recruit Ric Grayson has to make the choice between a carefree life without capes or answering the call that’s been ringing his entire life—the call to be a hero. Join Ric Grayson and the Nightwings as they learn what it takes to be a team—and what happens when you fight who you truly are.

NIGHTWING #59 marks the debut of Dan Jurgens as the writer.

I had no idea that Jurgens, most famous for THE DEATH OF SUPERMAN and more recently BATMAN BEYOND, was taking over the character until I saw the cover. So this was exciting from the get-go.

What we got was a smooth transition that continues to focus more on the new Nightwings. It is by no means a quick, action-packed story like the last issue but more of a character development piece.

Last time we learned more about Zak Edwards, the young cop who is torn about being on the team. This issue centers on Malcolm Hutch, the youngest deputy fire chief in Bludhaven’s history and one of the more gung ho team members.

While Malcolm spars with Grayson we learn that he had dropped out of the police academy. Malcolm says he decided to become a firefighter so he could save lives rather than be put in a position where he may have to take a life.

That turns out to be only part of the story, which I won’t spoil.

Chris Mooneyham returns to do the art on this one. This marks the first time since Amancay Nahuelpan in NIGHTWING #49 that an artist has done two issues in a row (since then they’ve rotated between Mooneyham, Travis Moore, Will Conrad, Davide Gianfelice and Gary Brown).

I dig Mooneyham’s simplistic designs, though in the sparring panels some of the body proportions seem a little off. Hopefully, there will be less rotation among the artists. It was frustrating trying to credit everybody, especially when the DC website is lax in that department (for example, the web profile of NIGHTWING #56 lists Brown as the artist but my hard copy credits Gianfelice so I almost didn’t mention him).

Grayson’s low tech, taxi driver Nightwing look continues to grow on me. I like how his mask is just oil rubbed on his face. It honestly reminds me of a Robin action figure from BATMAN FOREVER where you had to add water to the face to reveal his mask. The mask would never stay on very long…

It would be swell if Jurgens, the longtime Superman writer, would find time to include a cameo from the Man of Steel in an upcoming Nightwing issue. We’ve already had appearances from Alfred and Barbara after Grayson’s memory loss but it would be special if Supes or his alter ego checked in on him.

I’ve always appreciated Superman’s appearances in Grayson’s adventures. Grayson did, after all, take the name Nightwing from a Kryptonian legend Superman told him about. The two work well together and Grayson was a trusted by both the New 52 Superman and was quick to lend his approval of the original Superman post-Rebirth in NIGHTWING #9. It would be a worthwhile appearance, especially since in that issue Superman called Grayson a constant in the multiverse.

The Nightwings return next month for “Burning Down the House” (cue the Talking Heads!). – James Armstrong

BATMAN BEYOND #24 Review by Matt Whaley