SYNOPSIS: It’s time for a rematch! Robin and Connor Hawke face off for round two in their winner-take-all battle for League of Lazarus supremacy, but with the tournament nearing its end, what surprises does Mother Soul have up her sleeve? I hope it doesn’t involve that massive, hellish pit and the immortal monster lying within it-aw beans, it’s about that, isn’t it?! 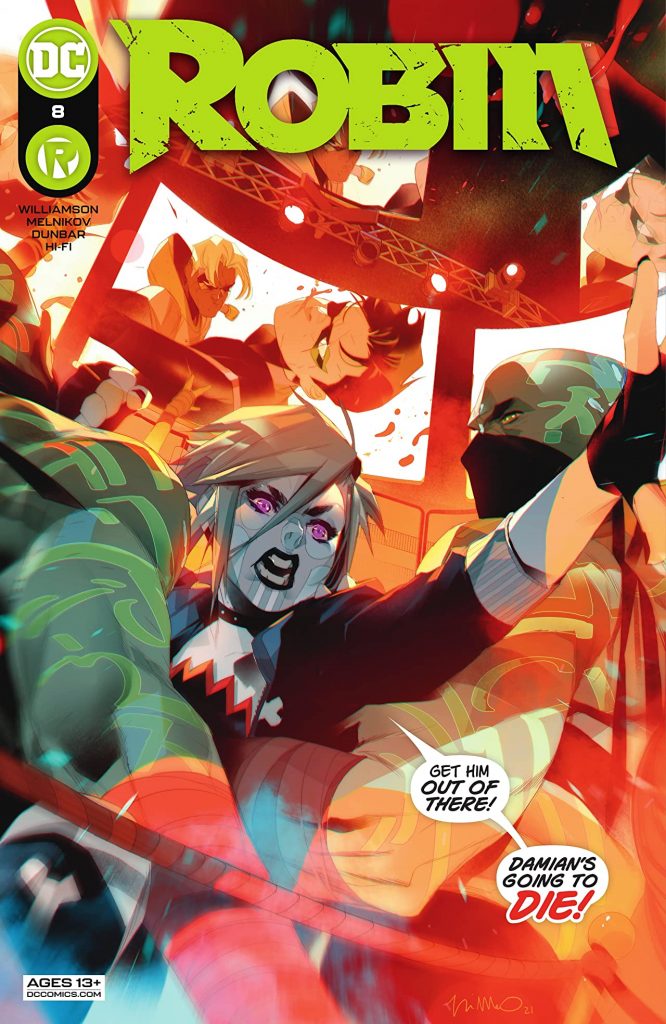 Not a lot happens in this issue.

And so much happens in this issue!

The title taunts the reader with, “Robin vs. Hawke! For The Last Time!” and what a Battle of The Birds it is!

For FIFTEEN pages, artists Gleb Melnikov and Max Dunbar thrill the audience with the fight we’ve been waiting for and they don’t disappoint! They somehow balance the line of making it fun, serious, whimsical, and deadly! I particularly loved the robin and hawk avatars behind the duo and how they get represented later on as the match reaches its conclusion!

It’s not all just punches and kicks, though. Williamson gets in some character moments as well, particularly Damian’s doubt about whether he can win. I also appreciated the initial face-off where we see flashbacks of the two combatants and their relationship on the island. Damian and Connor are very much two sides of the same coin and it serves as a nice reminder of that.

Damian’s motivations become more clear as to why he’s on the island. Although not spoken to directly, there’s a reason the ghost of Alfred haunts him in nearly every issue. Williamson bestows Damian with a meta moment, as well. Since his inception, Damian has faced a lot of pushback from fans. Let’s face it, he debuted as an abrasive killer, forcing his way into the domino mask over the bloodied body of Tim Drake.

Damian is on a quest here, to see if he is the monster people keep saying he is. I don’t know if he gets the answer he’s looking for by the issue’s end, but he certainly has a few heroic beats. His resolve is as resolute as his father’s, giving birth to one of the character’s best moments. Damian’s line, “I’ve been taking abuse my whole life. Why stop now?” puts a fine point on it. He may come from wealth, but a life of nothing but soft comforts is not how he was raised. The fact that he’s trying to atone, trying to better himself, demonstrates how important his “Hero’s Journey” on the island is. It’s worth noting that many of those he’s fought in this series are now rooting for him in the tournament. You could even say Flatline and Ravager care about him.

The end of the battle is shocking and brutal. For an issue that is so fast-paced, it comes to an abrupt halt when one of the combatants dies. After a few somber panels that let the act sink in, Williamson gets things moving again. Mother Soul puts her true cards on the table for all on Lazarus Island to see. With one or two more twists, the issue ends in true cliffhanger fashion, leaving the reader anticipating what’s next!

Robin #8 is a very quick read due to the focus on the fight, but that doesn’t mean it’s not a rewarding one. Everyone contributing to this entry dazzles and I cared about what happened to both combatants. Every issue makes me excited to see what Williamson will bring to Batman and the art gives the proceedings a sense of play amidst the death and carnage. The fight definitely did not disappoint in its ferociousness and creative storytelling. It’s another easy recommendation for Robin! – Javier E. Trujillo