SYNOPSIS: Batman and Mayor Nakano have freed themselves from the Vile parasite-infected sewers of Gotham City…only to find the nightmare has risen higher than they had imagined! With the city streets being overtaken by larger, (somehow even more) horrific creatures, these two enemies must put aside their differences and save the city while there’s still time! This skin-crawling, heart-pounding, terror-inducing installment of “Fear State” will change the nature of the Dark Knight and Mayor Nakano forever, and cast an eerie shadow over the next major Bat-event to come… Then, in “Foundations” part two, Batman runs into an unlikely ally in his investigation at the Arkham Tower construction site, and believe us, Harley Quinn has a lot to say about all this! 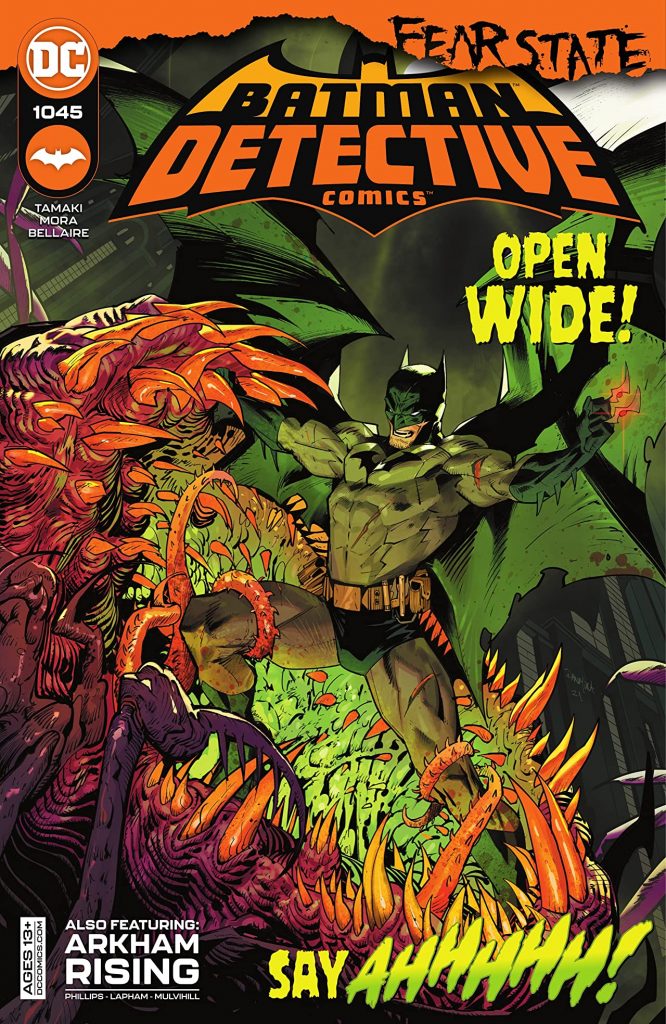 Detective Comics #1045 is a big issue.  Tamaki rolls up her sleeves in this issue and gets in the trenches with the word bubbles.  While Dan Mora once again tops himself with the interior artwork, splash pages, and panels galore.  Let’s combine that with a “fun little” mystery in the backup by Steph Phillips, and you got yourself a comic book well worth your cash on new DC Day.

This issue has a vintage feel — swap out Nakano for an early Gordon unsure of the Batman, and you would have fanboys raving about this story.  I do miss Gordon, but I’m enjoying the Mayor and Batman; go at it in the sewers and streets of Gotham, sue me.   Then Tamaki sprinkles in this harvest invasion aspect, like Alien on top of this odd couple, and it’s a fun evening in the city.  The way the plot thickens then relinquishes, never once giving the reader time to catch their breath, this is a roller-coaster ride from page one.   Batman and Nakano go through some stuff down under. Tamaki delivers a solid relationship-building issue while leaving so much unresolved between Nakano, Batman, and the reader.

Mora aces the artwork once again.   Every panel of Batman is statue-worthy.   Even the one of him staring up at the hive, it’s insane.  There is not one thing visually you can complain about in this book.  Mora is back with his exciting panels and layouts.  Circles, trapezoids, some parts have this 3-D effect to them.  I love when Mora does this, it separates him from other artists.  We have been on such a great run of artists on Detective; Mora adds himself to a great list.   Nightwing stole his two pages; one is a beautiful cityscape with Batgirl while the other is straight-up ID4.  Bravo for that little bit of nostalgia, even that can compare to the Batman splash page at the end of the book.  Color and illustrations work in perfect harmony.  This is a beautiful fall poster of Batman if I ever saw one.  The lock screen crowd will no doubt love this one.

Stephanie Phillips and David Lapham have writer artists’ duties respectfully on the backup story.  Phillips moves her story along nicely, giving me vibes of a level vs. Scarecrow in an Arkham game and manipulating his mind and psyche. An area that Phillips has dealt with while writing the recent Harley books since Future State.  Phillips teases the reader in her short story with a brief glimpse of Harley Quinn.  I’m slightly disappointed that Phillips didn’t get a chance to have an entire issue for this tale.

Another month another solid issue of Detective Comics.  When I was growing up, there was a saying in MLB “death, taxes and the Braves with the NL East.”  This title has been constantly the best book for a long time now, at least three years.  With Tamaki and Mora are doing their part, I do not see this stopping anytime soon.  Some sci-fi, some corrupt politics, throw in some Batman you got the most entertaining book of the month.  This book should please all bat fans out there while teasing more to come.  What more do you want out of a book? – Peter Verra

OPINION: Is This the End of Superman on Film? by Eric...