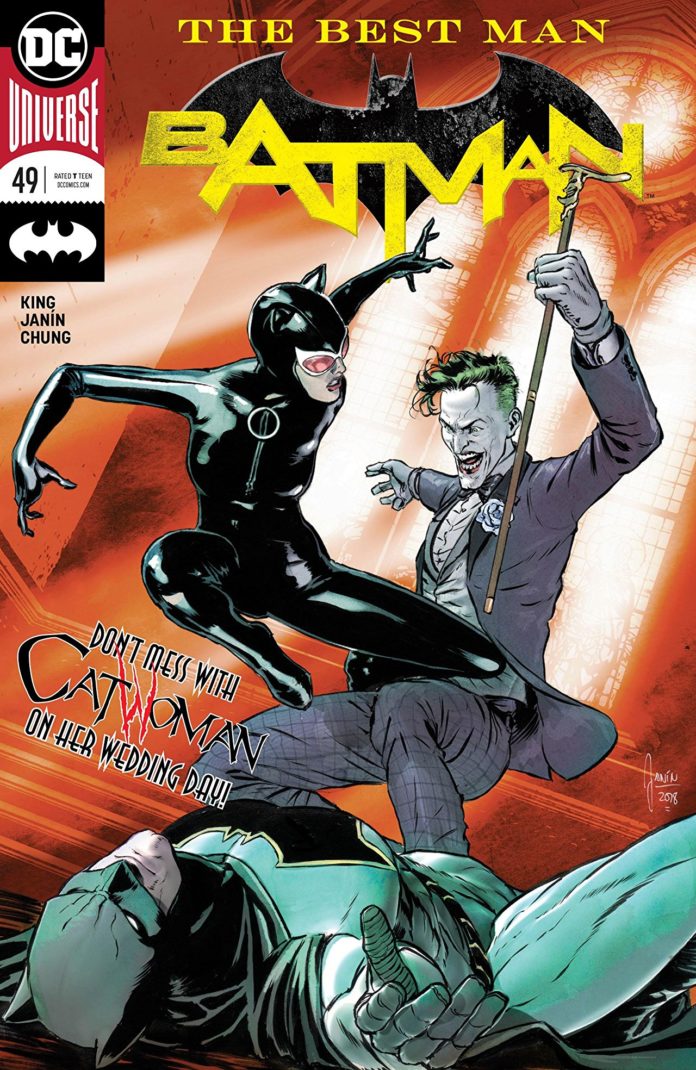 SYNOPSIS: “THE BEST MAN” part two! Now it’s up to Catwoman to rescue her one true love. It’s the Cat vs. the Clown in one exciting showdown that sets the stage for our giant anniversary issue-and the biggest union in comics!

For quite some time, DC Comics has been promoting BATMAN #50, which arrives on the Fourth of July, as “the wedding you never thought you’d see!” Writer Tom King even appeared on Late Night with Seth Meyers to discuss the monumental marriage. Therefore (and also since a wedding doesn’t necessarily end in nuptials), I don’t think it’s a spoiler to tell you that the last three words of BATMAN #49 are, “Next: The Wedding!”

But by the time you get to the unforgettable image in the final panel that bears those words, you’ll want to add two words of your own. Actually, there are lots of two-word combos that many of you will be uttering. Mine were, “But…HOW?!”

In issue #48, The Joker cleverly preyed on Batman’s matriomonial mind by attacking a wedding in one of Gotham City’s largest cathedrals — all because he’s angry that he wasn’t asked to be The Dark Knight’s best man, and also betting that the very venue will rattle the Bat just enough. With one of the most manipulative tricks we’ve ever seen him try, he turned sacrament into sacrilege to gain the upper hand. Meanwhile, Selina Kyle waited on a nearby rooftop, just as Batman had begged her to do, because it was THE JOKER, until her gut — and the sounds of gunfire and explosions inside — snapped her into Catwoman mode.

Issue #49 wastes no time, escalating immediately with a cinematic showdown between Selina and The Joker. King quickly and capably crafts a clever way to change the confrontation’s nature and tone, all while ratcheting up maximum emotion and suspense in ways that pages upon pages of furious fisticuffs never could.

Yes, The Joker gets emotional. Good luck with that, Selina.

King gives letterer Clayton Cowles a carpal-tunnel-level workout in this dialogue-heavy denouement to “The Best Man,” writing Selina and The Joker in ways that are utterly true to who they are but also exciting and unpredictable. It’s funny. It’s sad. It’s sweet. It’s sincere. But no matter what they say, and regardless of how they say it, they’re still the people they’ve been since Batman bounded into both their lives — the woman who loved him, and the man who laughs only as long as Bruce Wayne wears a black cowl, furrowed brow, and stern frown.

Mikel Janin’s pencils and inks are unstoppable. His action is energetically rendered and efficiently plotted, but it’s his emotional imagery that steals the show, making faces that powerully match King’s words. Look into The Joker’s eyes in the panel after THE KILLING JOKE reference and try to sleep tonight, and get swept away by the fierce beauty of Selina’s indomitable grit. The ruins of the once-majestic church add atmosphere and detail, with colorist June Chung’s palette oozing across every page with perfect purpose. Everything around Selina and The Joker is drab and gray, but their eyes are green and alive.

This is one of the absolute best Catwoman issues of all time. It’s also one of the absolute best Joker issues of all time, with an ending that’s an instant classic. Whether this marriage actually happens remains to be seen (and thankfully soon), but these two issues of “The Best Man” — especially this one — have legendarily added even more momentum to King’s magnificent run. — John Bierly