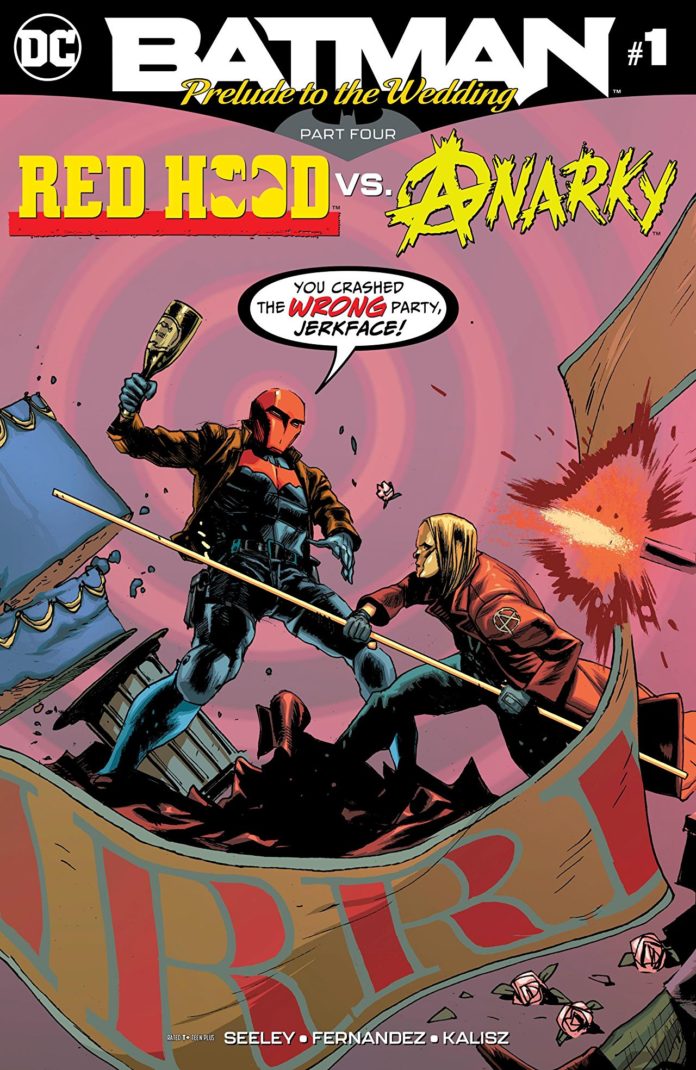 SYNOPSIS: Red Hood has always been the one standing slightly apart from the rest of the Bat crew. Some see him as the Robin gone bad-which is exactly the kind of thing someone like Anarky can exploit. Now Red Hood is running security at Catwoman’s bachelorette party-and if Anarky can crash it, that could be the final straw for Jason Todd!

I haven’t really cared for Anarchy since the Alan Grant Detective issues with Norm Breyfogle. So when I saw it was him and the Red Hood paired up, I was coming into this issue with my feet dragging. I actually like Red Hood. Beyond not wanting Jason Todd back, he is the most interesting part of the Bat-family next to Damien. I think in the back of my head I think I would have liked a classic Drake vs. Anarchy issue. But that may have been stale. Red Hood really stood out here.

You know what? I kind of loved this one!

Everything felt pretty much perfect in this issue. Except Bizarro. Not sure when he became…uh…un-backwards? But it threw me off a bit. A book like this should not include other characters if they are drastically different than their typical pop culture interpretations. At least give me a box. [*Bizarro got smarter. Check out Red Hood and The Outlaws #4 or whatever.]

But once I adapted, it worked.

Me Am not Ok nOw.

We start out with Jason given the duty of watching over Selina and her friends as they head out for her bachelorette party. There is a back and forth between what is currently happening and him be given his mission. The scene with him in the Batcave with Bruce and Alfred was fun as well. I am guessing this issue takes place during the same time frame as issue #2 since Clark is on his way to pick up Bruce. I am starting to get the time frame here. It would have been good if each issue has a clock of some kind to give you a sense of time stamp. That may have made the urgency felt more.

Back to the story, Jason gets interrupted from his main mission from his super bro Bizarro. There is a group of Anti-Feminist terrorists about to blow the roof off of the Cheetah Club. Red Hood emerges and has some fun dialogue with these guys and disposes of the bomb via a transporter to Mars. It was a pretty great take down and scene. My favorite line, “…remember, I may be a zombie kid in red and yellow tights hungry for souls beneath this things!”

But this all ties into a more intricate plot! They were brought there by…ANARCHY aka Moneyspider aka Lonnie Machin! Maybe stick with Anarchy bro. Love that he is an internet celebrity. I am thinking he probably has a Twitch account, cashed in on that bitcoin, he is doing well. Nice pull there from Seeley. But that freaking Batman always ruins these cat’s plans!

Soon the party moves to a more seedier side of Gotham. Man I thought all of Gotham was seedy, so maybe they murder and rob you here, but the girls head to an old goth club where Selina used to hang out as a kid. Which happens to be where Anarchy is planning his big plan to unravel. Again, this is tapping right into the current toxicity of our current times. Anarchy has people of all types and platforms ready to riot and cause some…anarchy. I won’t spoil the outcome, because I thought it was great moment for Jason Todd. Also, Selina was given a great gift. A pretty sweet moment here. There is a lot to like here.

The weakest part of these ties ins, are the connections to the Joker. In this case, its really weak, but it works. Anarchy has always been a pathetic character. So to see him believe what was told to him makes sense.

This was my favorite of the Prelude to the Wedding books. Seeley really had a good take with this one. The art by Javier Fernandez was fun. It didn’t feel complete, but it had good action layouts. Big plus for the Batman ’89 Batmobile. You will always capture my heart with that. Hugo Petrus did 4 pages as well, but they blended in well. I didn’t notice a thing.

This issue turned it around a bit for me. I am looking forward to the Harley vs. The Joker next week. I hope this ends strong. Again, I like Tim Seeley. I really do. His work on Grayson with Tom King was great fun, as was his run on Nightwing. I get there are somethings you just have to do with an assignment like this one. Bring it home Seeley! – Justin Kowalski

THE BATMAN | “The Bat and The Cat” Trailer