SYNOPSIS: Batman is hot on the trail of the man who’s been watching him for months, and he can’t believe who it is. Meanwhile, someone launches an assault on the clown prince of crime, the Joker! 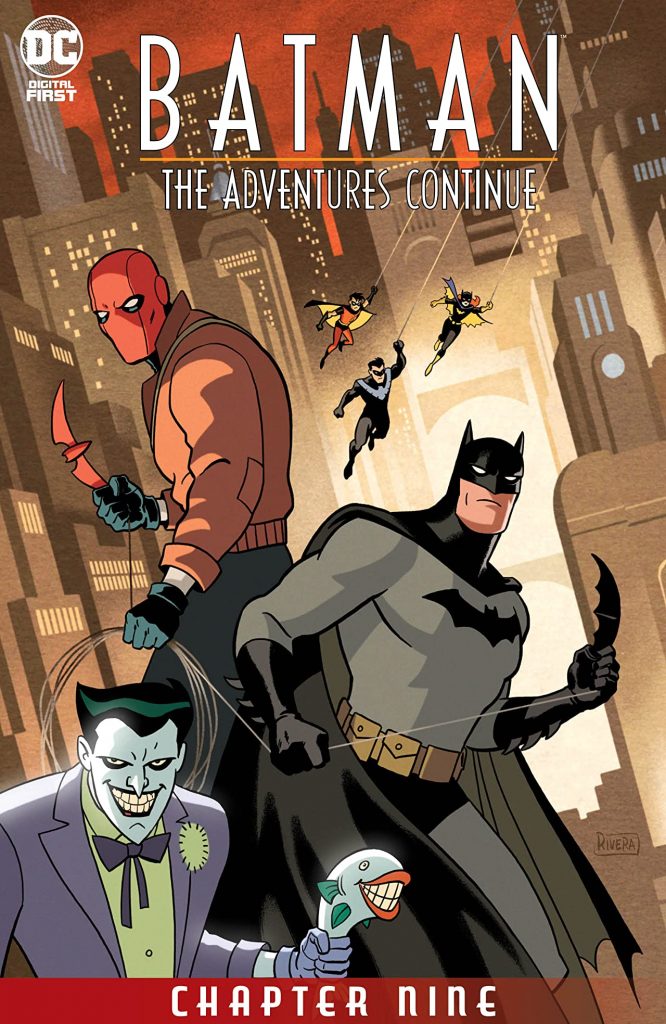 If you’ve been waiting for the moment the Timmverse animated version of Jason “Red Hood” Todd made his full-fledged debut instead of just skulking in the shadows, wait no more! Chapter 9, “Red Son Rising, Part 1”, is a doozy!

The issue opens upon The Clown Prince of Crime, realizing he is under surveillance. He’s got a new henchman, Straightman, who looks like he could give Bane a run for his money. Joker and his goon quickly provoke a confrontation, causing Jason to flee, but not before leaving evidence behind, evidence that leads the Dark Knight to a stunning revelation as to who has been following him these last few chapters!

As Bruce heads off into the night to learn more about his no-longer-deceased-former-partner, he leaves Alfred to tell the tragic tale to Tim, who demands that he has a right to know the truth.

It’s here that Burnett and Dini weave their continuity magic. As I’ve discussed previously, there’s a lot of comic Jason in animated Tim. The writing duo had their work cut out for them in order to finesse in a back story that would 1) make sense 2) not just copy and paste comic continuity 3) stand on its own and still remain true to the character of Jason Todd and the concept of a Red Hood.

By taking inspiration from a fairy tale, the Animated Series continuity now has the makings of its own unique Jason Todd and my hat is off to those gentlemen for their inventiveness. Jason’s new origin allows Tim to relate to his predecessor far more than he did to Dick Grayson, which should lead to an interesting meet-up, if one should occur.

If you like the animated aesthetic, Templeton continues to stun with his art, capturing the visuals of the show perfectly. He even adds his own embellishments to the bat logo inside the yellow oval, as a way of marking a transition from the old look to the new during the flashback. It’s a nice, subtle touch.

Kubina is no slouch on colors, either. Everything pops on the digital screen, be it the murderous yellow and red glow of The Joker’s eyes, the vibrant palette of the carnival hideout, or the cloudy red skies of Gotham. Everything just shines and Kubina adds depth to the minimalist art style.

Next chapter hints at further revelations so if you’re a Batman: The Animated Series fan, make sure you come along for the ride! Things are (literally, judging from the last panel) heating up! – Javier E. Trujillo 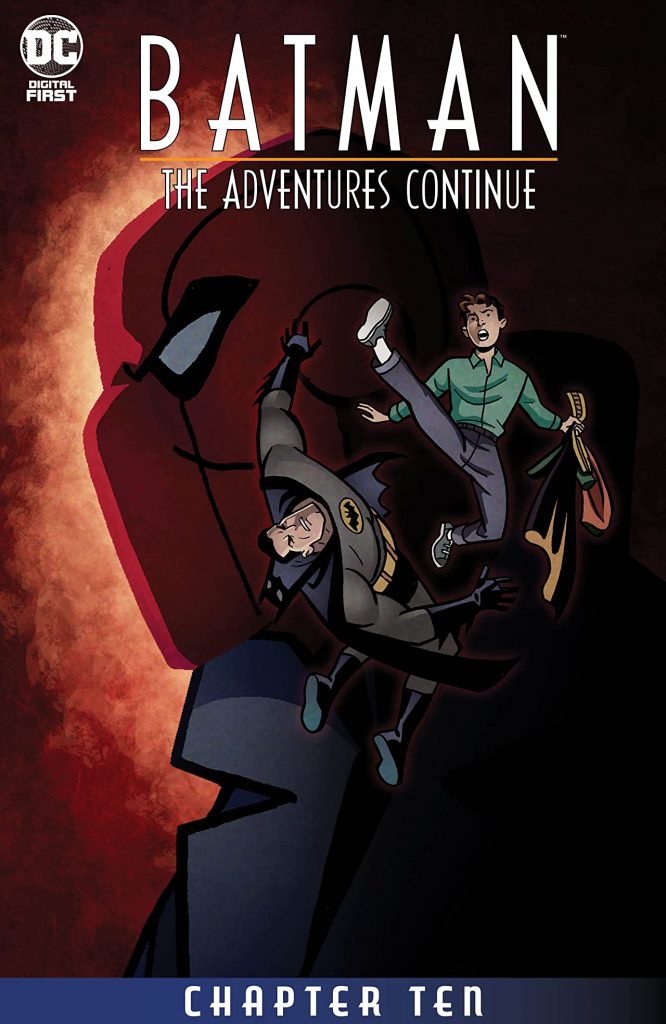 The tragic tale of Jason Todd continues, in this, the tenth installment in what is shaping up to be a fantastic miniseries!

Right from the start, Burnett and Dini set a somber mood, which is reinforced by the art and coloring of Templeton and Kubina. Colors are less splashy this time out, with Templeton using more shadows as we reach the climax. It’s another delight to look at!

As far as the story goes, if you’re familiar with Jason’s post-Crisis comic history, you’ll see some familiar motifs. On this Earth, Bruce and Jason come into conflict with each other right from the first mission. However, they reach an understanding as Jason reiterates to Bruce that he’s not Dick Grayson. They move forward, in the spirit of trust and second chances.

Jason adopts his own version of the Robin suit, replete with red boots. I also like the dash of reddish-brown hair that Jason sports. It harkens back to his original look and also foreshadows his future as Red Hood.

Jason, as Robin, has no problem following Batman’s orders against the common criminal, it’s when he comes across the various members of the rogues’ gallery that his more vicious tendencies come out.

I feel like this story recalls quite a few from across the various Bat-canons. Burnett and Dini imbue shades of Batman: Arkham Knight, Batman #424, and Batman #641 amongst others. In fact, I have to wonder if Jason’s encounter with the Scarecrow in some way informs the visual transformation he undertakes when we see him next in The New Batman Adventures episode, “Over The Edge”. His more terrifying, hung-zombie-corpse look never needed an explanation, but the events of this issue would certainly explain a new outlook.

Burnett and Dini examine Bruce’s emotional blindness when it comes to Jason, both in the past and the present. Despite his gruffness and emotional aloofness, Bruce really does want to have faith in Jason, but the detective side of him eventually pushes through, sometimes a bit too late.

The whole team is firing on all cylinders now as we build to a crescendo. There are two installments left digitally and the next one promises to reveal Jason’s last days as Robin. I think we’re in for a treat! – Javier E. Trujillo

A BOF Film Review | NIGHT OF THE ANIMATED DEAD

BTAS Retrospective – “Nothing To Fear”