SYNOPSIS: The Joker’s army is growing hour by hour, with weapons beyond anything the Clown Prince of Crime has ever used before. Batman must hold his mind together so he can strike the final blow and take back his city-but how can he heal the rifts he’s created in his life to get the help he needs? And while all this is happening, the villains of Gotham City are waiting out the carnage Joker has unleashed-and Catwoman assembles an army of her own! 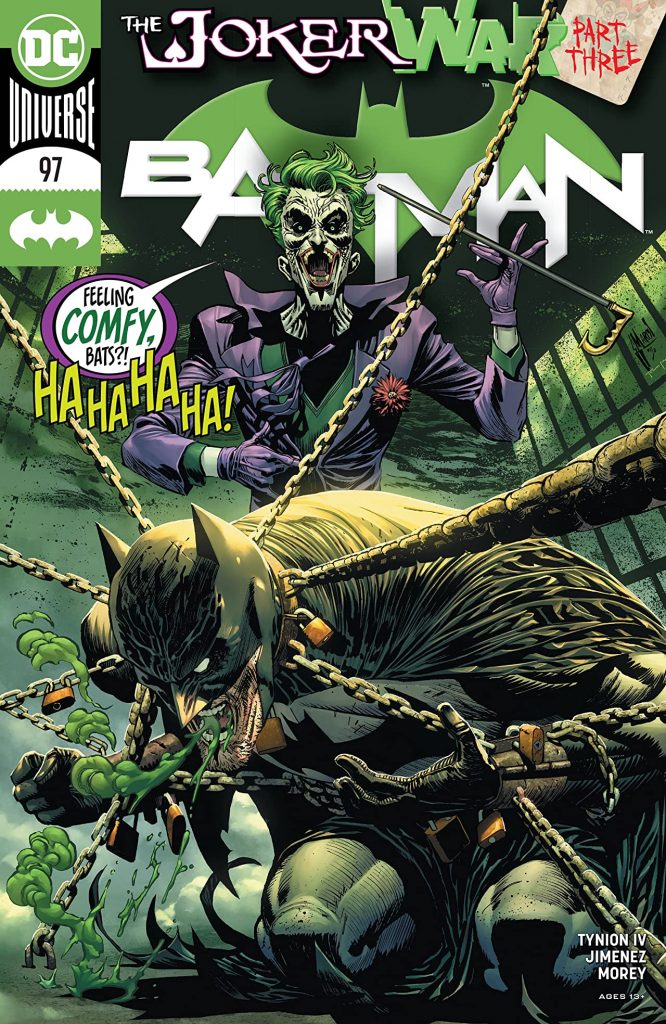 I’m currently both excited and annoyed by the BATMAN title and the current story arc — “The Joker War” — by writer James Tynion IV.  While The Joker’s plan to ruin Bruce Wayne and ultimately kill Batman is interesting, the story moves so excruciatingly slow, that it’s aggravating.

Case in point, “The Joker War, Part Three” in BATMAN #97 where almost nothing happens in this issue from where #98 left off.

Eventually, “The Joker War” is going to come to a conclusion in BATMAN #100 — which means just 3 more issues left.  And while we don’t really know how it’s all going to end and where both Batman and Bruce Wayne will be once it’s all said and done, I still wonder if this entire story had to take place over the course of 6 issues of BATMAN?

With that said, I do want to see how this all ultimately plays out.  There are a whole lot of questions that still need to be answered — including the whole “Alfred” thing which is about to come as soon as the next issue (#98) based on #97’s ending.  With only 3 issues left, it looks as if the pace of “The Joker War” is about to significantly pick up.

TRADE REPORT: Jared Leto Had An Episode Over JOKER