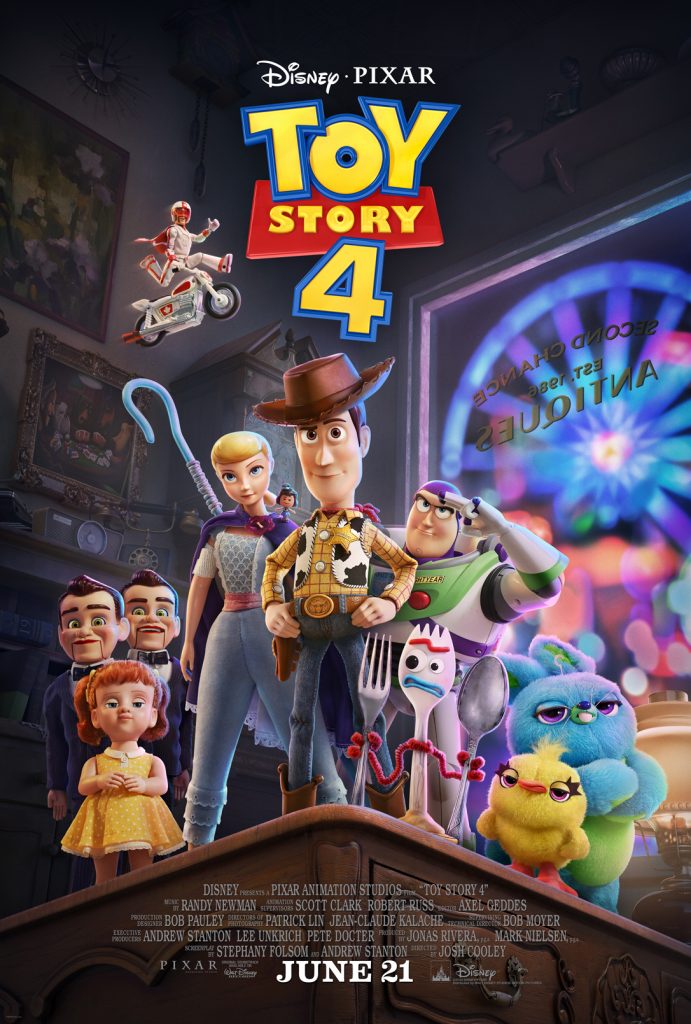 You can do the math.

Yes, my kids grew up with TOY STORY and absolutely loved it.

Not only did we watch those movies an unfathomable amount of times, but all of my kids got countless TOY STORY, well, toys over the years as birthday gifts and from Santa.  I can’t tell you how many different Woodys, Buzzes, Jessies, Bullseyes, and others they played with over the years.

Bottom line: When I think of TOY STORY, I also think of my children when they were, um, children and I’m very attached to those movies.

I knew watching TOY STORY 4 was going to be tough on me emotionally regardless of the quality of the film. Also, I didn’t know if they could make another sequel that could live up to the standard of the previous films. Furthermore, TOY STORY 3 had such a perfect ending for a TOY STORY trilogy, was there even a need for another TS movie?

Well, let me tell you, TOY STORY 4 proves that yes, there was a need for another TS movie and it definitely lives up to the standard of its predecessor.

Look, the main story isn’t really anything new as yet again, one of the toys needs rescuing and it’s up to Woody (Tom Hanks) and the gang to save the day.

In this case, the toy that needs rescuing is Forky (Tony Hale) — a handmade toy made out of a spork by the toy gang’s current “kid,” Bonnie (Madeleine McGraw) — who has been imprisoned by the psycho (but not really — you’ll see) Gabby Gabby (Christina Hendricks) and her ventriloquist dummy goons inside an antique store.

That’s not what TOY STORY 4 is really about.

It turns out that it’s not Forky that needs to be rescued, it’s Woody.

I mean that literally and figuratively.

I’m not going to get into specifics, but I’ll say that Woody — no longer with his Andy — is starting to question his role as a “toy.”

Oh yeah, and then there’s the whole thing with Woody and Bo Peep (Annie Potts).

Bo — who we haven’t seen since TOY STORY 2 — has ended up as the leader of a group of “Lost Toys” that follow a traveling carnival seeing the country and playing with kids across the nation and driving a skunk (you’ll see).

Could Woody not only be a little sweet on Bo, but a little envious of her life as a “Lost Toy?”

As far as the rest of the TOY STORY gang, well, the gang’s all here — including Buzz (Tim Allen).  All of them have their moments — some more than others, like Buzz (who has discovered his “inner voice”) — but this is Woody’s movie, totally.

Like the last two TS movies, there are a few new toy characters are included and my absolute favorite is Duke Caboom (Keanu Reeves) — Canada’s favorite stuntman!  Duke is clearly based on the Evel Knievel toys from the 1970s and that’s why I am so fond of this character.  I had ALL of the Evel Knievel toys as a kid, loved them, and got one hell of a nostalgic kick Duke Caboom.  Also, Keanu Reeves’ performance is as fantastic as it is funny.  The PTSD flashbacks Duke has about his long gone French Canadian owner/kid will have you literally laughing out loud!

As far as the “look” of the film, Pixar is on top of their game here — but when are they not, right?  While the characters all look the same, the backgrounds and details are photorealistic and quite awesome.  Simply beautiful.

I just adored TOY STORY 4 and yes, I cried — a couple of times.  Every character got a satisfying and happy ending…but is this really the end?

Like the three previous films, the story is self-contained and there are no seeds planted for a sequel(s).  I guess we’ll see, but I’ve got to say that ending is so perfect, perhaps it is best for this to really be the end.

One last personal note about the TOY STORY movies…

As a kid, I loved all my toys and played with them hard.  There was a time when I was a very lonely child and my toys not only entertained me, but they were my “friends.”  Be it G.I. Joe, the Six Million Dollar Man, Mego Batman, Evel Knievel, and my other “guys,” I have very fond childhood memories playing with them.  So I totally get the theme of all these TS movies about how much kids love their toys, how they keep them company, and how they are truly their friends.

Go see TOY STORY 4 and I hope you all enjoy it as much as I did.  And if you’re of my vintage and have kids who grew up on TOY STORY, make sure you bring some tissues.

And I want a Duke Caboom. – Bill “Jett” Ramey