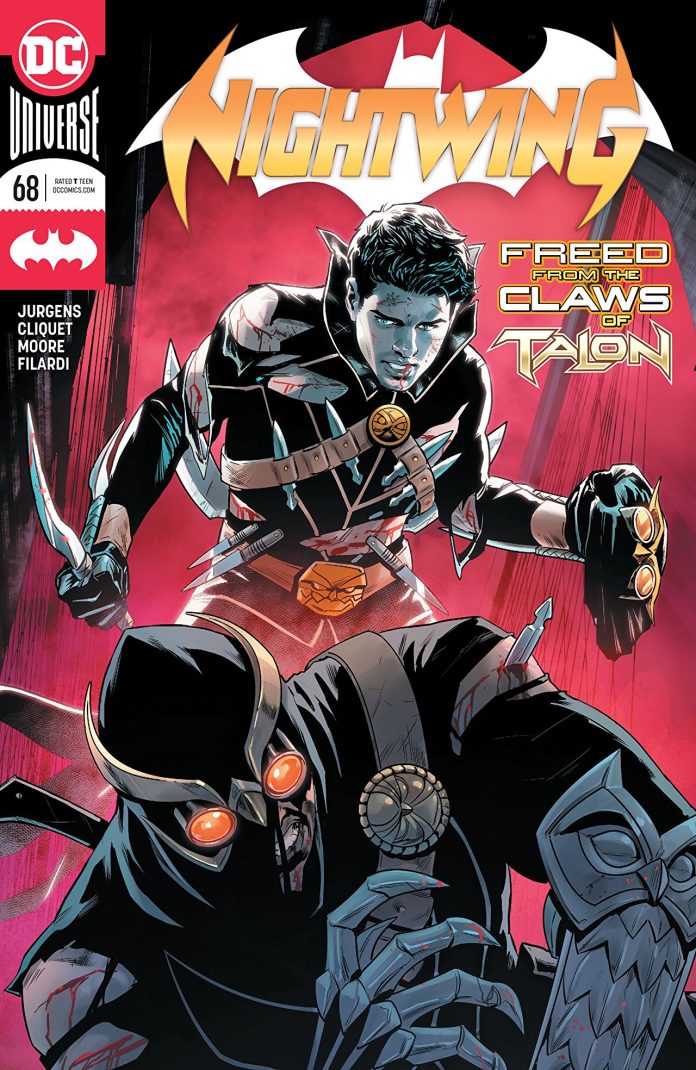 SYNOPSIS: Being a superhero often means layers of identities. For Ric Grayson, he once had a life as a sidekick to Batman, a life he forgot when a terrible gunshot wound erased his memories. When his long lost grandfather, who is also a super-assassin called Talon, returned to his life and implanted false memories into his brain, that added another layer. Now, with Talon vanquished, Ric Grayson has to shake loose the truth. Is he the man he has created for himself, or is there still some of the old Nightwing lurking around inside his head? Even if he wanted to, could Ric be Nightwing again when four other people have put on the mask and picked up where he left off? Whichever it is, Talon made a mess of his current life, and now Ric has to start putting it all back together.

In NIGHTWING ANNUAL #2 we learn that the brain doctor hired by Bruce Wayne to care for Dick Grayson after he was shot by KG Beast was secretly working for the Court of Owls.

The doctor used her position to selectively erase Grayson’s memories so that the Court could again try and recruit him as a Talon, their chief assassin. I’m not sure if the implication is that the Court hired KG Beast to shoot Grayson in the first place or if they just took advantage of the situation. I suppose it works story-wise for the Court to be behind it but I personally prefer the shooting being tied to Bane’s plan to break the Bat.

Grayson has special goggles forced on him by Talon (aka his great-grandfather William Cobb) that implant false memories of him being trained to kill on the Court’s behalf. Grayson, after a quick costume change between #66 and #67, is now in full Talon gear, has attacked the other Nightwings and come close to killing a guy in a red flying suit (his name is Condor Red but with Hutch being Nightwing Red I just found it easier to call him something else).

The flying suit guy gets one last shot in and blasts the goggles off Grayson’s face, breaking the brainwashing. Okay, maybe it’s not an unbeatable plan (the whole thing does fall apart after some goggles get shot off) but the Court/Talon does call this a long, detailed plan.

It’s poetic that Grayson goes on to fight Talon on top of a suspension bridge. Anytime you have Grayson fighting in a place that resembles a high-wire act it just feels right. While Grayson’s not completely healed he does sneak in a familiar, trademark quip by telling Talon, “The more you talk…the more I know you’re bad news.”

The majority of the issue was again drawn by Ronan Cliquet with Travis Moore contributing to the final act and two beautiful flashback drawings in the beginning. The flashback pages are frame-worthy, with one showing major events in Grayson’s life and another an ensemble collection of Batman villains (including Catwoman, an odd choice since she’s so close to Batman). The only drawback to Moore’s work is that he draws modern-day Grayson several years younger than Cliquet.

So now we’re seeing the sunset of the Ric Grayson story arc. I’m glad it lasted as long as it did and wasn’t quickly retconned after Dan Jurgens took over. This wasn’t a perfect run, for several issues the art bounced from one artist to another and some villains would appear seemingly just to kill time.

However, as Denny O’Neil said, comic writers are caretakers of modern American mythology. I like that the Ric Grayson storyline added a consequential chapter to Dick Grayson’s life. It felt like a major event that I got to experience, like when others recount A DEATH IN THE FAMILY or THE KILLING JOKE. Based on the online reactions this was a polarizing adventure but that’s what we need to keep our passions about these characters alive.

Props to the team/caretakers involved and I look forward to how Grayson’s slow recovery plays out in the coming months. – James Armstrong