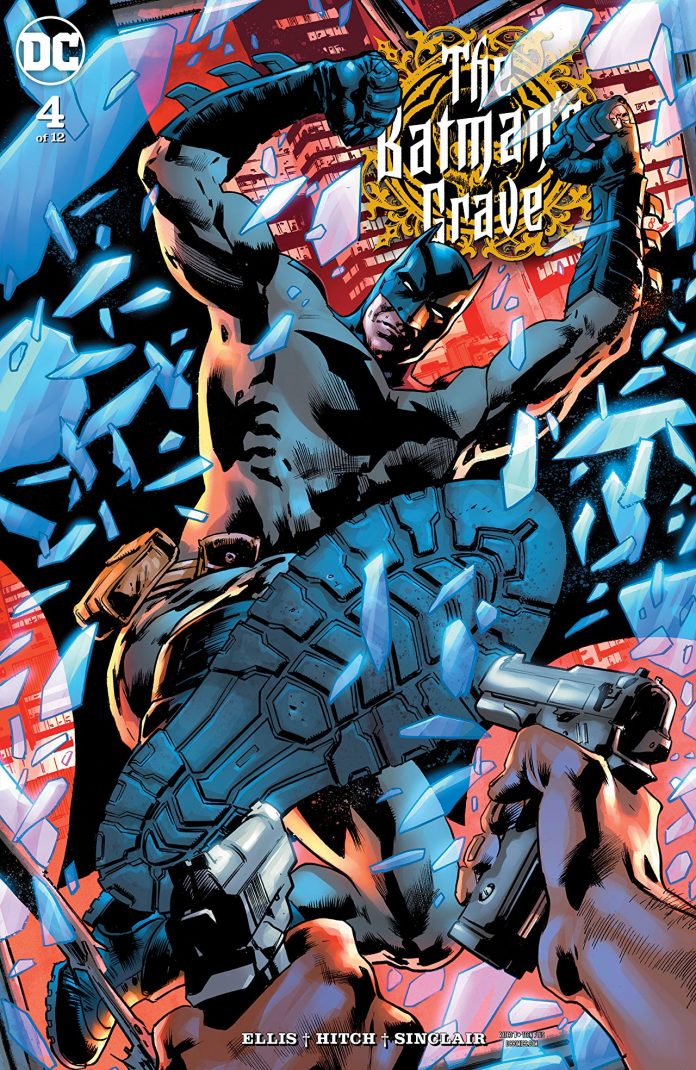 SYNOPSIS: Why did a blackmailer become a murderer? How does The Batman survive an opponent who can kill him with his own mind? Find out all this and more in the latest chapter of the 12-issue series from writer Warren Ellis and artist Bryan Hitch!

It’s Chapter 4 of the Ellis/Hitch epic and I’m starting to notice a pattern. As with the second issue, this installment is primarily one big close-quarters fight. Because of that, the opening of the issue felt like filler to me. Beautiful looking filler, but filler nonetheless.

We see Batman select his costume for the evening, a more armored suit than he’s been wearing, calling to mind the main outfit from the Batman: Arkham Knight game. I wouldn’t be surprised if Hitch took some inspiration from it.

Once he’s suited up, he quietly races across town and it’s not until midway through page 4 that we get any dialogue, with Alfred briefing Bruce. As with the last issue, Ellis highlights the Batman/Alfred team, making the faithful butler an integral part of Bruce’s operations, providing intel that their Bat-Drone is picking up. He’s essential and with nary a Robin to be seen, Batman and Alfred are the real Dynamic Duo of this book!

The lack of dialogue till now quickly gets us to the Main Event-round 2 with the assailant from the last issue. This time, the Dark Knight will have to contend with two additional henchmen, upping the tension as he now has more problems. As Batman makes his grand entrance dramatically into the room, you can hear the chorus of the Batman theme of your choice in your head. Alex Sinclair beautifully shifts the color palette as the warm glow from the unit is replaced by cold blues and smoke as the Dark Knight swiftly and methodically strikes.

Hitch really excels at his fight choreography, his storytelling highlighting the important parts of the action and keeping certain elements hidden until he needs to reveal them. The fight feels brutal and heavy as each blow lands. The issue refrains from the use of onomatopoeia because it isn’t needed. Hitch’s art is so good you can easily conjure up the sounds of broken bones without aid. The story doesn’t shy from the violence or the damage it inflicts, but that darkness is balanced by the levity inherent in Batman’s reactions to aspects of the fight. Batman’s curt, “Are you done?” is a perfect example of this.

Ellis continues to slow play the Scorn Army with Batman getting another piece of the puzzle that is forming around him. Despite the brevity of this issue, I still found it an exciting read with dazzling art and coloring. The Batman portrayed in this issue is a very human one, prepared, but not omniscient, which makes for a lot of fun in the story when he gets challenged. There may not be a lot of meat to this chapter, but it’s a tasty morsel in the overall banquet Ellis and Co. are preparing for Batfans. – Javier E. Trujillo

With THE BATMAN, a Batverse Begins