SYNOPSIS: After a body washes ashore at the Gotham docks, Batman hunts for a mysterious mercenary known simply as the Muscle. But can the Dark Knight protect the assassin’s next target: Detective Renee Montoya? 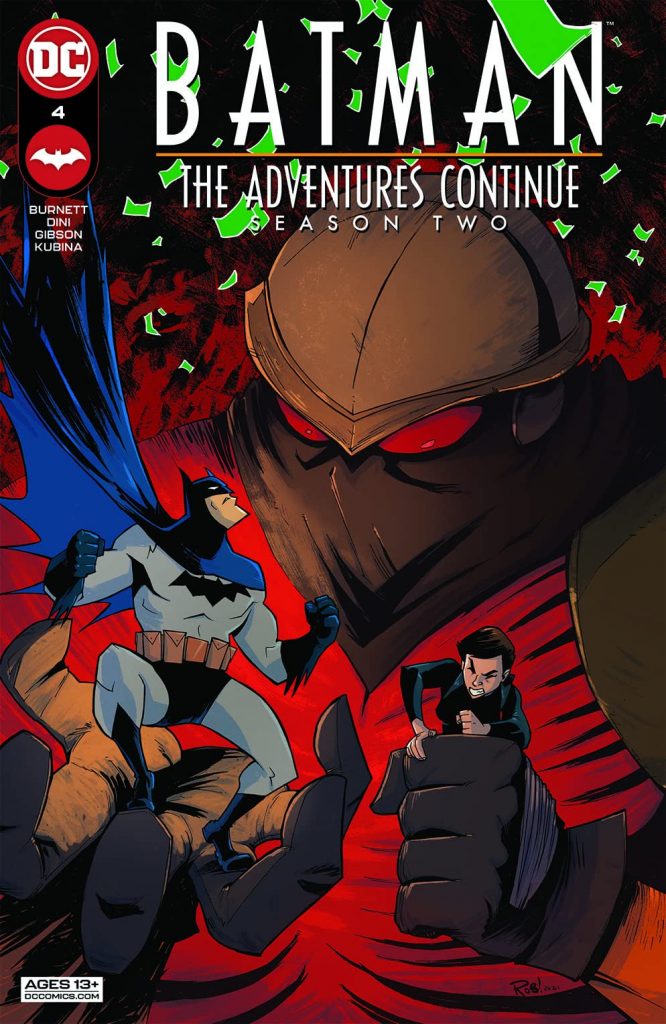 Season 2 of Batman: The Adventures Continue has been a happy surprise. Changing up the format and expanding the page count has been a blessing. The last two installments have felt more like standalone episodes that are ready to be animated. What’s fun is that while you can read these recent issues as “Done-In-Ones”, there’s also an element of sub-plot that carries over, adding to the overall enjoyment for those who are there month in and month out.

That’s where this issue starts off-carrying over the death of Hamilton Hill and how it’s changing the political landscape of Gotham. We’re quickly introduced to the titular character, The Muscle, who comes off very much like the Batman of mercenaries. He’s big, menacing, and comes equipped with his own utility belt and gadgets. His look is reminiscent of equal parts Dark Knight and ‘90s Daredevil, mixed into its own unique thing.

After carrying out a job for former mayor Emerson Mayfield, The Muscle sets his sights on one of the GCPD’s best, Renee Montoya, at the behest of “Boss” Rupert Thorne. While someone having a vendetta against a Gotham cop may seem similar to the episode “A Bullet for Bullock”, Montoya is being targeted because she’s incorruptible, whereas Harvey is, well, Harvey.

Burnett and Dini add a little more depth to Montoya with this outing than we’ve seen from this continuity. Not only do we get insight into her private life and her relationship with Gloria Navarro, but she’s not exactly a fan of The Batman. It’s not that she hates him, but being a vigilante, she sees him as a loose cannon, one who leaves the important aspects of police work, the ones that make sure that those who get apprehended stay that way, behind. She’s got a valid viewpoint, one she amusingly shares in front of Bruce Wayne.

The Bruce and Alfred stuff is a lot of fun. Their partnership is crucial as always and I’m glad we have this book to keep that relationship alive. They have such a great repartee with each other and who doesn’t love seeing Alfred being terrified as he hydroplanes in the Batmobile? That’s worth the cost of this issue alone!

Jordan Gibson takes over on art from series veterans TyTempleton and Rick Burchett. Let me say, his work is phenomenal in this issue! Aided and abetted by the always-talented Monica Kubina, they really bring in a film noir vibe that doesn’t relent. It’s beautiful to look at! Gibson has the Animated Series aesthetic nailed, just like his predecessors, but there is a terrific sense of danger and movement here. Kubina’s lighting is impeccable! Shadows abound and cloak the subjects in mystery. Batman’s arrival during the climax in particular is a favorite moment of mine as he swoops down from the shadows with a terse “I see you”.

There are a lot of Batman books to choose from. Now that the Court of Owls has been introduced, there hasn’t been much in the way of splashy events or hooks to get readers into The Adventures Continue Season 2, but if you want solid entertainment, this is a fantastic book to get it from. The creative team really brings the Dark Knight Detective atmosphere to this story. This title can easily be viewed as a book aimed at kids and while that may be true of its predecessors going back to the 1990s, that isn’t the case with this volume. They are definitely going for a more mature vibe, even throwing in a swear word amidst the murder and gunplay. Don’t get me wrong, it’s nowhere near getting ready to debut on DC’s Black Label, but it shouldn’t be dismissed as something only for little kids. Much like the series it’s based on, adults can love and appreciate this title, too. Make sure you don’t miss it because this issue, while not having any earth-shattering, continuity-changing revelations, still is a blast to read! – Javier E. Trujillo