It’s been three years since the events of Dark Knight III: The Master Race. Lara has spent the time learning to be more human, and Carrie Kelley has been growing into her new role as Batwoman. But a terrifying evil has returned to Gotham City, and Lara and Carrie must team up to stop this growing threat-and they have a secret weapon. Young Jonathan Kent, “the golden child,” has a power inside of him unlike anything the world has ever seen, and it’s about to be unleashed… 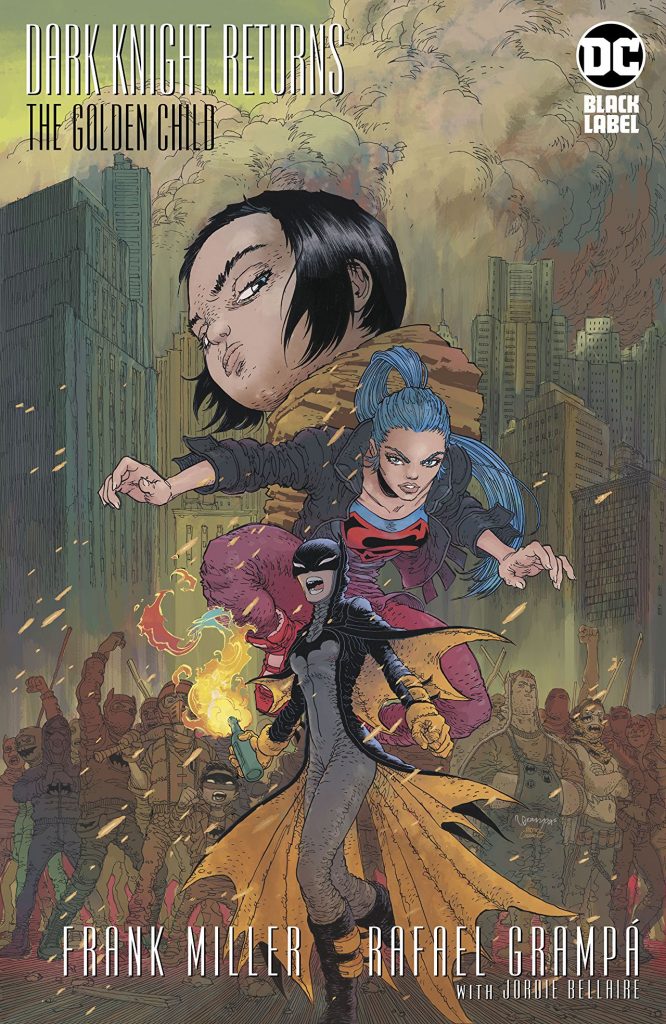 Not EVERY Frank Miller comic needs to be in the hard-boiled Sin City style. And yet here we are…here we are.

That was my initial reaction to just the first page of this issue that focused on Superman and his two children. From there, the story jumps to a few years later, with nary a Superman or Batman to be seen. Instead, Carrie Kelly has taken on the mantle of Batwoman and Lara, well, Lara wears the iconography of both her super-parents, but she still loathes the humanity she has resigned herself to serving.

Darkseid has taken to tampering with an election featuring a familiar-looking candidate because a godlike being feeds off the energies of local politics, apparently. He’s aided and abetted by The Joker, who I remember being dead in The Dark Knight Returns, but here we get an “explanation” that he never really dies. OK.

Somehow this all results in the Kents and Batwoman taking down the ruler of Apokolips who discorporates, only to return and transform Batwoman and the citizens around his into obedient, mindless drones.

It’s here that Jonathan Kent, “the Golden Child”, steps in to confront Darkseid with his new power, neutron vision.

I found this issue to be very overwritten. The dialogue is in the hardboiled tradition that Miller used to great success in the Sin City series, but it just doesn’t work here, feeling contrived. I didn’t find this story to be as egregious as say, The Dark Knight Strikes Again or All-Star Batman & Robin, but it’s a far cry from The Dark Knight Returns and Bruce Wayne’s internal narration.

Speaking of one’s inner monologue, apparently, the characters in this story seem to be privy to each other’s thoughts. What’s thought of in caption gets responded to via word balloon. And what’s thought of in caption gets broken. Broken. Broken into a million fragments. Like your grandma’s precious china crashing to the floor. Broken. Shattered. Broken. You get the idea. It’s A LOT to endure over the 48 pages and I promise not to subject you to anymore.

As for the art, I remember Rafael Grampa’s contribution to the 2014 issue of Batman: Black & White #4 and loving his off-beat style. Had it been something I came across in my childhood, I probably would’ve rejected it, but as an adult I appreciate all the linework and details he puts in, to say nothing of the fantastic layouts and bold angles. For me, it was the saving grace of this story, the one thing I just soaked in and enjoyed. It might not be to every fan’s tastes, but it resonated with me, at times reminding me of Frank Quitely but still unique. In a week with several Bat-books, this one will at least break out due to its unconventional art style.

When I think of The Dark Knight Returns, I often remember its moody palette, awash in greys. It was one reason I had such a hard time getting into its sequel. The Golden Child seems to strike a balance between the two, utilizing both vivid and more natural coloring. I appreciated the contrast visually between Jonathan and Lara. One is short in stature, adorned in earth tones, while the other towers, a beacon of neon. It complements their diametric outlooks.

Outside of the art, I found it a real struggle to enjoy this entry into the never-ending Dark Knight Returns…and Returns…and Returns saga. Miller’s message is muddled, with inane, repetitive dialogue, an incomprehensible plot, and little character growth to be seen out of the three heroic leads.

Bruce Wayne sat this story out. I wish I did, too. – Javier E. Trujillo

THE BATMAN WHO LAUGHS #6 Review