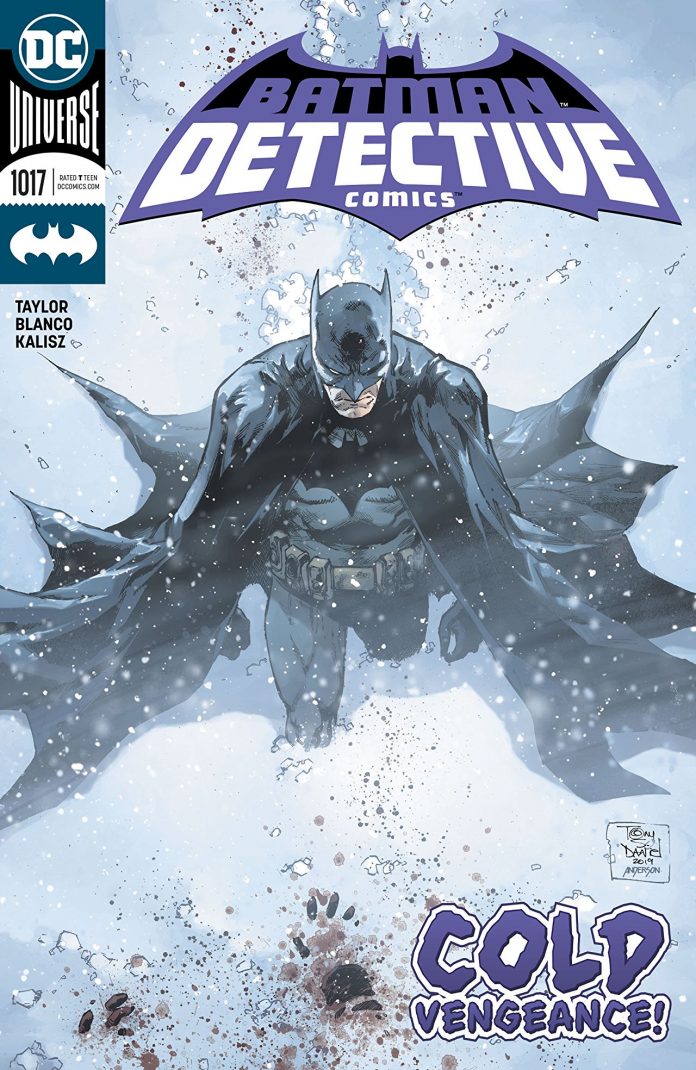 SYNOPSIS: In the dead of winter, a child has gone missing from the Martha Wayne Orphanage in Gotham City…and the bearer of the Wayne family name is on the case. But to solve this mystery, Batman must turn to another bearer of the Wayne family name, his estranged son Damian, to hit the night skies as Batman and Robin once more. Can father and son put aside their differences to rescue the missing Miguel Flores? And what other dark turn is in store for the duo on their journey into the night? Don’t miss this special tale by guest writer Tom Taylor!

Tom Taylor fills in for Peter J. Tomasi for this issue of Detective Comics and you won’t be disappointed.   Taylor is one of the best writers in the game at the moment.  His Friendly Neighborhood Spider-Man is arguably the best Marvel title every month and he just set the world of DC afire with his DCeased series.  Needless to say, when I saw his name in the byline, I knew I was in for a real treat.

The only other time I can think of that Taylor has tackled Batman was in the very recent and incredibly shocking DCeased and we didn’t get to see that much of BW if you know what I mean (Spoiler Alert!).  Now we get a full issue of Taylor taking on Gotham City.   Taylor here doesn’t go for the heavy hitters in this issue.  This is a personal story more about Bruce Wayne than it is Batman.  Taylor draws you into the story with a young Bruce and his Mother Martha, creating that emotional force that will drive the rest of the story.  As an orphan runs from the orphanage bearing Martha’s name that is more than enough to get the Batman on the case with some influence from that always reliable Mr. Fox.  Even with the city in constant peril, Batman makes this a top priority.

Taylor takes the reader on a journey where Batman and Robin multitask at an elite level.  While they are not hunting down the big-name whackos in Gotham, there are crimes that need to be dealt with, questions that need to be asked and leads that need to be followed.  At times I got vibes of Matt Wagner as I was reading.  This story is not grand, it’s not world-threatening but its Gotham to its core.  It is magnificent to see this type of story unfold, not every “arc” needs to be drawn out of six issues, sometimes these one-shot issues are the perfect palate cleanser after something like the Freeze arc that Tomasi just delivered.

Fernando Blanco provides the interior artwork for this issue and really does wonders with the snow.  Seeing Batman and Robin on a rooftop looking down on the city was awe-inspiring as it puts the book in perspective, a needle in a haystack.  The artwork is not overly detailed and at times felt as gritty as Gotham itself, a perfect match if I don’t say so myself.  Blanco throughout the book gave me Eddy Barrows vibes.  The Batmobile rescue captivated me emotionally, as Batman and Robin’s reactions/facial expressions set the tone.  They are so emotionally invested in finding this boy and when they do Blanco translates that perfectly on the page.  There is one scene towards the end with Batman and Lucius that is also very emotionally draining, and Blanco’s facial expressions perfectly match the tone that Taylor is trying to set.  It is great when the writer and artist seem to be in perfect symphony, you can’t beat it!

Taylor and Blanco really deliver a touching story at the right time.  As the weather gets colder here on the east coast you feel the tension and the rush of this emergency.  It feels real, no world threats, no gods, no superpowers.  Just the will to act, the determination to find a young boy who is out in the cold-fighting for his life.  These are the stories that separate Batman from the other heroes. That human element, he is just a man trying to do right for his fellow man.  In a way, it is the perfect story for the holiday season. – Peter Verra

Thoughts on Pattinson’s Batman Casting, THE BATMAN, and the “DCEU”