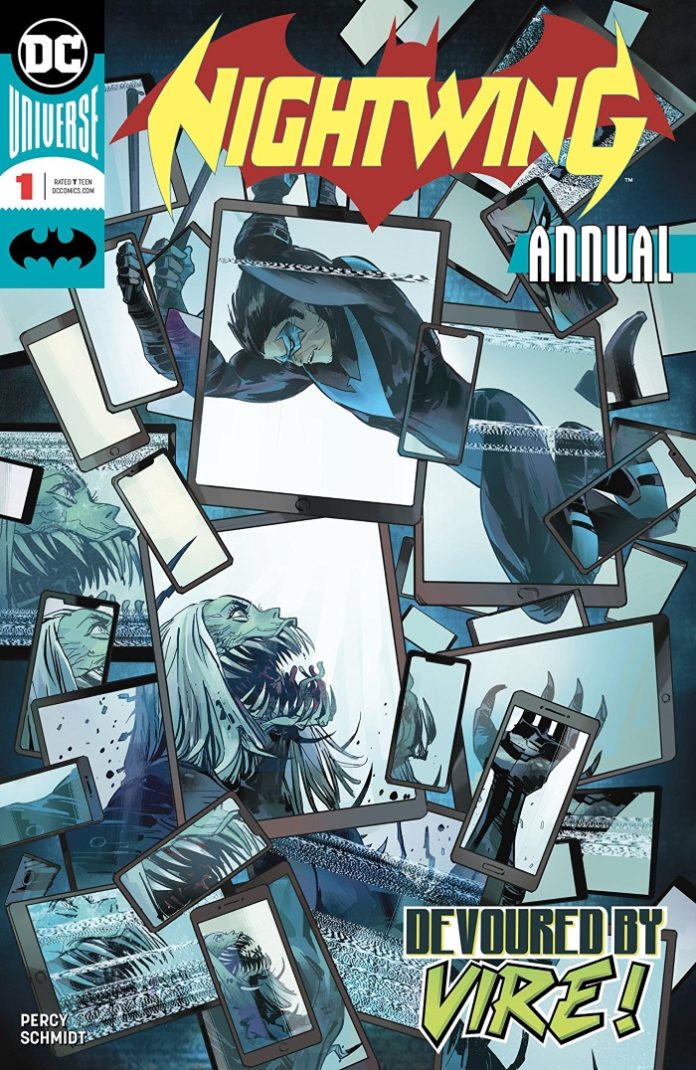 SYNOPSIS: The smart city overhaul of Blüdhaven was just the beginning—a single battle in a larger cyberwar that Nightwing is only starting to understand. But now the story of the Dark Web organization begins to expand as Grayson travels to Gotham City and partners up with Vicki Vale. We live in an era of fake news, alternative facts, disinformation. The gatekeepers of truth can’t be trusted anymore, and sometimes elections, businesses and even lives are at stake. Nightwing faces off against the first of three lieutenants in the army of the Dark Web: Vire, the psychic embodiment of malware who can unearth your darkest secrets.

Nightwing Annual #1, titled “Deadline,” picks up where “The Bleeding Edge” storyline concluded. Batgirl has Nightwing on an operating table and is about to remove a machine from his body that has copied his memories (very Matrix-like).

All this takes place in the run-up to a cyber attack where all the news (computer, TV and print) is hijacked by the Dark Web group known as Wyrm. Using lies, staged footage and people’s tendency to overshare, Wyrm creates confusion in the streets of Gotham.

Splash in a brutal cybernetic autopsy and a big bad who looks like Venom and Predator’s offspring and you have a nice little homage to sci-fi horror from writer Benjamin Percy. The first issue of “The Bleeding Edge” (Nightwing #44) even had cool Easter egg tributes to writer William Gibson and filmmaker David Cronenberg.

Having stepped into the worlds of politics and journalism I was cautious about this storyline. Done poorly it could have been a too-on-the-nose take on current events. It literally has fiction aired as news and talks up the greatness of Walter Cronkite.

Luckily, aside from a basic villain monologue Percy and company adapt this ripped from the headlines story properly. It strikes the right balance between entertainment value and sending a message.

Artist Otto Schmidt continues to make every panel worth studying in detail as he doesn’t zoom in on big plot points, making you have to look closely to spot what characters are talking about.

It’s not all sci-fi horror as Nightwing is still the eternal wisecracker. Here he has a knack for casino/gambling references (no doubt a side-effect of patrolling the streets of Bludhaven, which often feels like the DC equivalent to Atlantic City).

In what feels like a modernized Batman ’66 moment, Nightwing makes a casual daytime visit to the Channel 4 News headquarters in costume to confer with Vicki Vale. The two also flirt quite a bit so somewhere the Michael Keaton Batman is fuming.

I also think Schmidt used Elizabeth Montgomery as an inspiration for his Vicki Vale (what can I say, I grew on a lot of Nick at Nite).

To combat the Wyrm problem Nightwing picks up some new tech from Batgirl. Though if there is one moment where I deduct points in the humor category it’s when Batgirl is showing Nightwing his wonderful toys and it’s hard to tell if he’s reacting to the more…unexpected…items with sarcasm or enthusiasm.

And while so much of the humor in this series revolves around Nightwing not being too tech savvy he can suddenly become an expert and come up with the right plan to give the heroes an edge.

Punch technology in the face and pick up this issue at your local comic book store! – James Armstrong

James Armstrong is a lifelong Batman/Dallas Cowboys fan, a BOF reader since high school and has finally gotten into comics these last few years. He’s lived in Austin, Texas virtually all of his life and would appreciate it if you wouldn’t move there. Austin is full right now, you’d be happier someplace else.