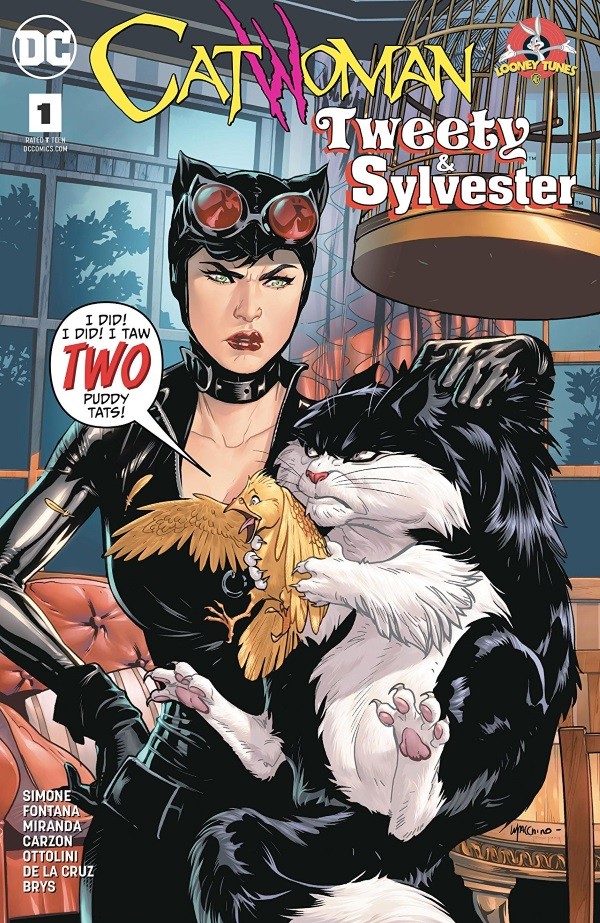 SYNOPSIS: In his relentless pursuit of Tweety, Sylvester suddenly finds himself with a new, human ally-Catwoman. Tweety then realizes that he’s going to need some help too, and recruits a super-hero of his own. It isn’t long before the scale of the conflict begins to get out of control and suddenly theres’s a full scale war between cats and birds that threatens to take over all of Gotham.

Last year when DC decided to combine their universe with the Looney Tunes, it turned out to be one of the funnest comic book stunts of recent memory. And for business, if something works well, you have to milk it until the idea dries up. Well, we’re now in round two of this crossover, and the milk is still pouring.

Speaking of milk, one of the most brilliant team-ups out this week is Catwoman with Sylvester, and that damn Tweety bird. Now, full disclosure: I have always wanted the cat to eat the bird. Tweety was squeaky, annoying, and always personified that twerp that sucked up to the adult in charge, but was a skeeving little monster behind closed doors.

Writer Gail Simone crafts a brilliant story in the first 30 pages intertwining the two worlds. It seems a group of witches send the two toon characters to Gotham, with armageddon on the line. If Sylvester doesn’t eat Tweety, cats will be annihilated. If the bird meets its doom, feathered friends worldwide will become extinct. Neither can do it alone, so appropriately Sly finds Catwoman, and Tweety finds Black Canary.

The issue unfolds in a genius, easter egg fashion and at a quick pace. Tons of characters make appearances, and ACME is plastered everywhere in the background. I won’t say who wins in the end, but I’ll confess I had a big smile on my face. Inaki Miranda handles the art duties to perfection. The tone is set in a more mature, dark fashion but each page embraces the fun of this whole idea. I particularly enjoy the vibe of each scene with the witches. It gives off this fun, Halloween atmosphere that I can’t get enough of.

Just like last year’s crossovers, the fun doesn’t stop there. We also get a fun backup story more in the style of a Looney Tunes cartoon. Written by Shea Fontana, and drawn by Walter Carzon, we find ourselves at the apartment of ol’ Granny, where Tweety is waiting to watch Tonan O’Birden on the tube. Well, Sylvester has his eyes on the bird, and Catwoman has her eyes on the safe in the livingroom. Mischief, hijinks and hilarity ensue, with an outcome that isn’t surprising, but is just as fun. Very solid.

The first issue of this crossover, and it’s a blast. Bringing these two worlds together is something that can only be done in comics (maybe eventually a straight-to-video release?!) and it’s being done perfectly. I dug this issue from front to back. If you enjoyed these books last year, you won’t be disappointed. If you didn’t give them a shot, here’s your chance at redemption. – Ryan Lower