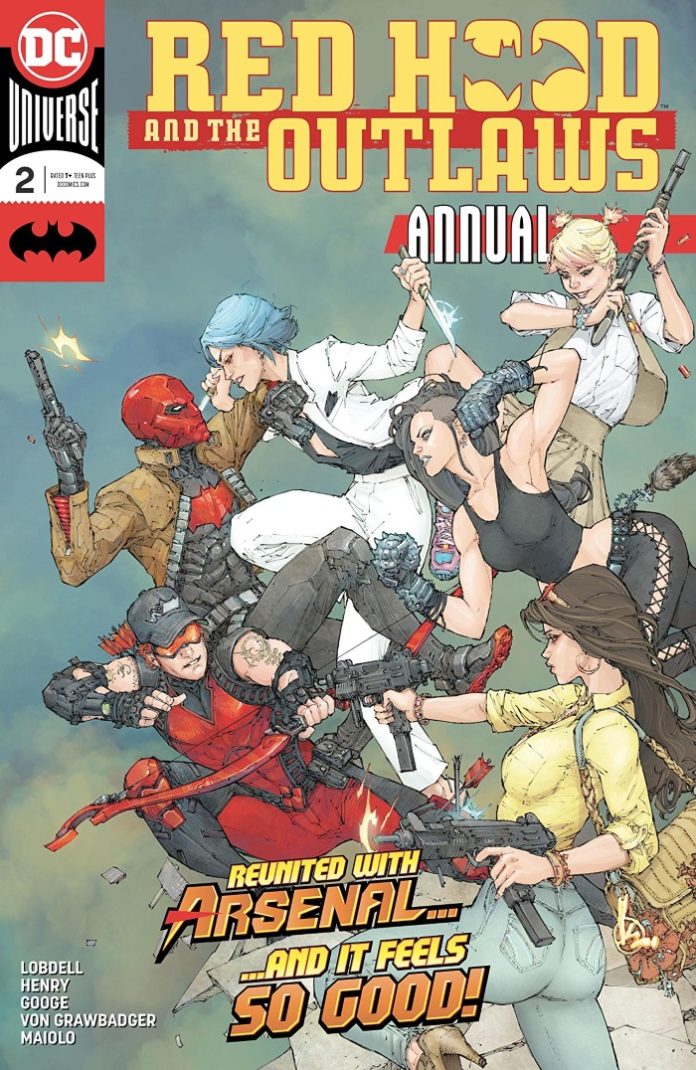 SYNOPSIS: The boys are back-Red Hood and Arsenal, together again! Sort of. While Jason Todd is recovering after a brutal beatdown from the man who taught him everything he knows about brutal beatdowns, Roy Harper divides his time between being a nursemaid to his bestie and tracking down the source of tainted drugs that have killed thousands. It isn’t long before the two find themselves in Beijing battling the Sisters of Suzie Su! All this and…the inexplicable fate of Artemis and Bizarro!

Issue #25 covered a lot of ground. Penguin was shot. Jason battled Batman. Artemis and Bizarro were sucked into a quantum wormhole. What could happen next? A Bro-date with Arsenal, that’s what.

Let’s clear the air right off the bat (pun not intended)–This issue comes very close to being bad. All of the stuff with Arsenal does not play well at all. It comes off as tacky and ham-fisted. I understand what Lobdell was going for, but it fell short in many ways. The moments that do work the best are of Jason reflecting about his and Bruce’s recent fallout. The internal monologues that Jason has are magnificent.

Jason and Roy chit-chat about a criminal organization called The Underlife. That’s actually all that happens. The Underlife are set up to be the baddies for Jason going forward. Especially after he and Roy throw down with Suzie Su’s gang in relation to a drug deal. Which was all a set-up by you guessed it– The Underlife.

Roy is off to rehab since he has seemingly fallen off the bus. Jason is off to presumably sort out some personal issues on his own. Again, this issue was just set up for future stories.
Finally, we get some resolution to the Artemis/Bizarro story. They are shown in a dystopian world moments after the wormhole incident; in front of The Hall of Punishment?

In conclusion, this is probably the worst issue of the Rebirth Era of The Outlaws. I understand the necessary evil of having to set-up future stories, but it has been done before more successfully. Going forward I really hope Lobdell really gives us a great Red Hood story. Everyone questions why Jason is still alive; give them a reason Scott.  – Justin Lee