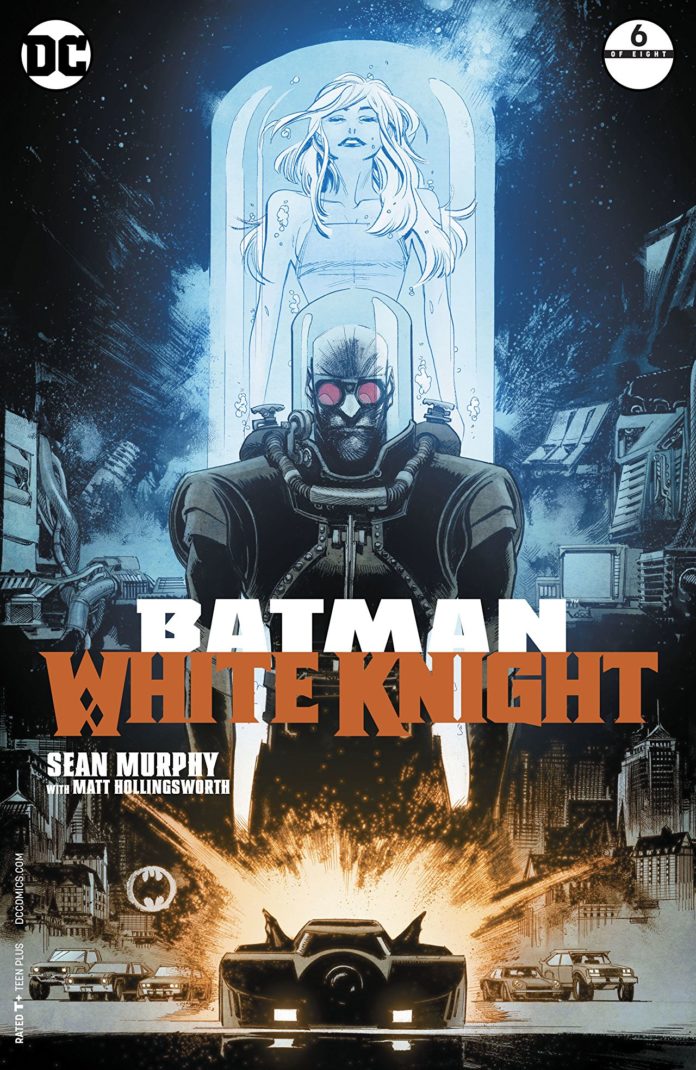 SYNOPSIS: Gotham City’s strongest alliance comes to an end when Gordon’s trust in Batman reaches its limit. On the verge of resignation, the commissioner attempts a final act of public service, but an unlikely intervention allows the Dark Knight to fight another day. Meanwhile, Jack’s mission takes a hit when his pills lose effect—and under cover of all this chaos, Neo Joker is positioned to take the city hostage.

I’ve said it before, and I’ll say it again: Sean Murphy’s BATMAN: WHITE KNIGHT is the best Batman story in a long time.

This web he’s been spinning has weaved into a beautiful story, with even better looking art. Every page is pushing boundaries. Every panel is working on character. And every word is advancing the story.

Last week, Murphy tweeted that he was worried he may have put too much action in issue #6. You can take a deep breath, it’s the perfect amount.

In a nutshell, the GCPD, led by Gordon, is hunting the Dark Knight (and how  he’s doing it will excite the kid in you for sure). The city is out to get him and bring him in on one condition: the mask stays on. After a genius trap is set, the (former) Clown Prince of Crime comes face-to-face with his nemesis for a dirty alley brawl. It’s all part of the plan…or is it?

While the focus is (deservedly) on this chase, Neo Joker wants to remind us she’s still around, and is fighting to be the real villain of the book. We get a full explanation on Mr. Freeze’s relationship with Thomas Wayne, and how more is happening than we knew. And Barbara may be the key to bring the truth to the forefront.

I love this issue. The action is thrilling and exciting, but it’s the character interactions that are making this book so damn good. Murphy has slowly been turning everyone against Batman, and it’s finally come to a head here. If you go back and reread each issue, you’ll see how the writer has been patiently working toward this climax. I’m glad we’ve gotten to this point, because I can’t imagine how it’s going to end. Has our hero ever been this low in his crimefighting career? Though we’re focused on the Dark Knight, this is definitely a Joker story (Murphy has even said that DC changed the original title from Joker to Batman). He took a drastic measure of changing himself, devising a wicked plan to turn the city against it’s hero, and become the new king. And it worked! Except as you see in this issue, he’s having doubts that it’s what he really wanted. Murphy’s Jack Napier is empathetic, intelligent and remorseful. Yet he’s still that sneaky clown we’ve all grown to love over the years. To that, I reiterate: I don’t know how this story is going to end!

Last but not least: I love Murphy’s Gotham. His style is so original and haunting, perfect for this world. The pages aren’t blasted with black, but there’s such a gloom hovering over every panel. I think that works perfectly in this story, and is a great contrast to the light Napier is trying to shine in the city. While he’s rebuilding a neighborhood, and uncovering secrets that have cost Gothamites for years (both implied as well-intentioned), we all (much like Batman) just can’t shake the fact that this is an elaborate trap and the Clown will be jumping out of the box at any moment. And all of this is exactly how Murphy wanted us to feel.