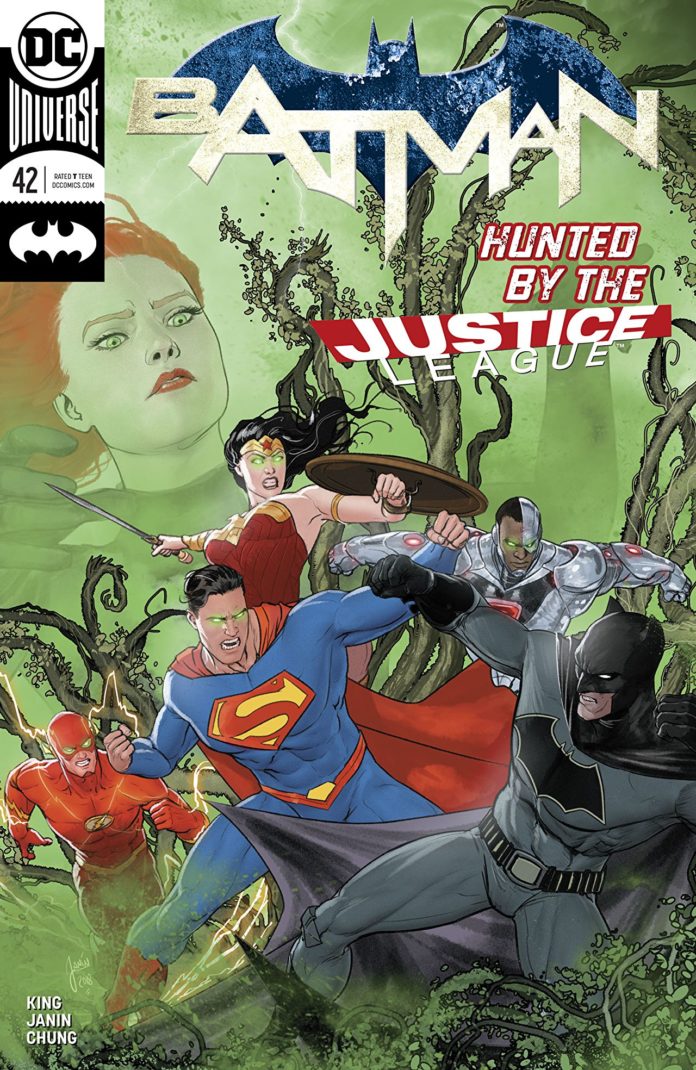 SYNOPSIS: “EVERYONE LOVES IVY” part two! Poison Ivy has taken control of every man, woman and child on the planet, and only Batman and Catwoman have escaped her influence. But will the pair of them be enough to nip this in the bud?

“HUNTED BY THE JUSTICE LEAGUE” scream the clashing costumes on issue #42’s cover. “Not so much,” say its much more cerebral guts, and it’s all the better for it. (Besides, how is Selina not on the cover?)

It’s three weeks into Poison Ivy’s reign as the every-mind-controlling Queen of the World, and only Bruce Wayne and Selina Kyle are immune (because Batman has a counter for everything, or, in this case, almost everything). For the most part, Ivy allows them to move freely, because really, what are two people going to do when she’s got the whole planet seeing green?

She does keep tabs on them, though, and her manner of doing so is a big part of why she’s not worried. The horror of the wordless first page is amazing; I’ll let you see it for yourself, but it’s as powerful and as spooky an image as anyone who exists in the DC Universe could imagine. And that feeling persists over the following pages, as Batman and Catwoman cruise deserted suburbs that have an all-too-quiet, George Romero kind of vibe that not even a noisy Batmobile can break.

So… what’s in the suburbs? Batman has an idea about something (or someone?) that could be the key to Ivy’s defeat. Ivy dispatches the Justice League, but not in the brawling manner the cover suggests. She’s more interested in incapacitating than decapitating, but in a moment of rage, Batman pushes his luck.

Or maybe that was his plan all along.

The clever little ways in which Batman handles an Ivy-controlled Superman are brilliant, and his big play that culminates in a shocking (and shockingly drawn) result is possibly one of his most ridiculous plans ever. So ridiculous that Selina should be furious with him for even considering something that has at least a 99 percent chance of failure. Then again, when you sign up to marry The Batman, such leaps of faith are part of the package, and it says a lot about their bond that she rolls with it.

Writer Tom King uses the setup to take Batman off the playing field long enough for a wonderfully written and staged exchange between Selina and Ivy (that references King’s incredible “War of Jokes and Riddles”). And when you realize what Batman’s really up to, you’ll be reminded of his strategy for defeating his beastliest bad guy in the “I Am Bane” story. I’ve probably said too much already.

Mikel Janín’s handsome pencils flourish under June Chung’s vibrant colors; they say so much with faces and eyes in these pages, and Janín does a lot with posture, too, especially in moments that suggest Clark’s still kicking around inside of Ivy’s red-and-blue-suited cage. The imagery on every page is incredible, which has been a hallmark of this book’s many artists since the Rebirth era began.

The horror elements of this issue are unique and effective. And regardless of its high concept, the story is still driven by character, character, character. Tom King’s reign over Gotham City remains as original and as exciting as any Batman thing I’ve ever consumed, and “Everyone Loves Ivy” is no exception. – John Bierly