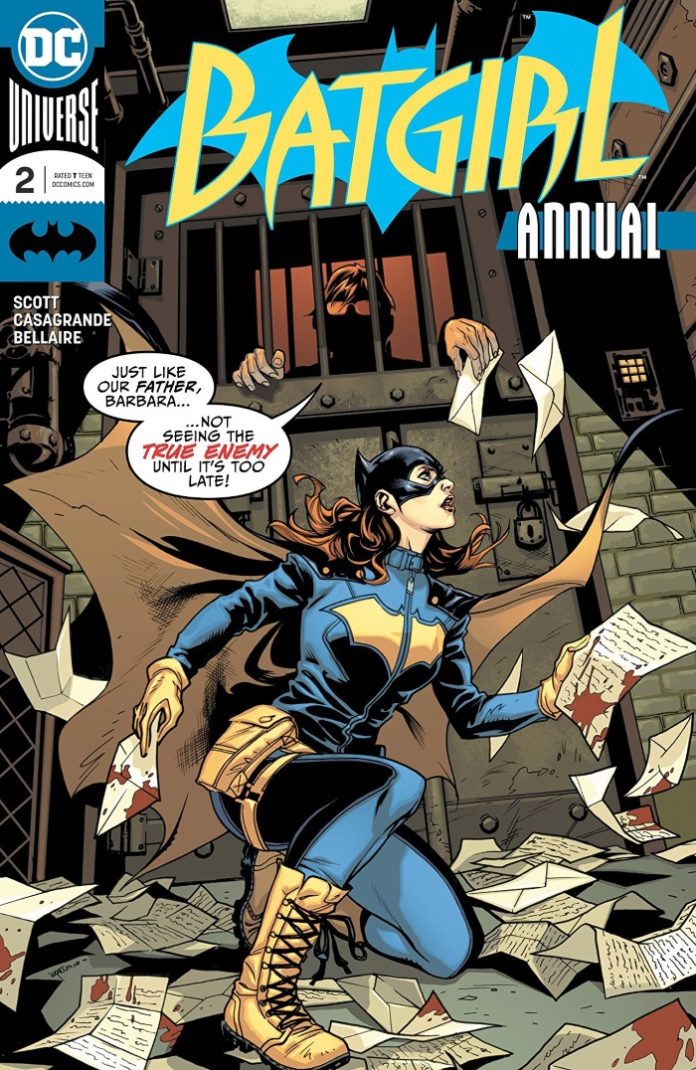 SYNOPSIS: Sibling rivalry takes on a whole new meaning in this one-shot story that tracks Batgirl’s hunt for a serial killer whose M.O. strikes a familiar chord. Namely, a disturbing similarity to her brother, current convict James Gordon Jr. Family bonds are restored during a visit to his maximum- security surroundings, but Babs’ doubts linger. Is James Jr. helping to solve this case…or pulling her strings in a diabolical power play?

This biggie-sized issue continues the darker story trend with a serial murder mystery showcasing Batgirl’s detective work and some meaty psychological explorations. We get to experience Barbara’s volatile interactions with her psychopathic brother, James Jr. We see the anger, maybe hatred, she feels toward what he has done and what he has become, but also the love that she still feels, remembering the little brother with whom she shared a strong bond and who undeniably helped shape the person she is. This issue also briefly touches upon abusive relationships in a scene with one of James’s devoted fans. It’s not explored thoroughly, but it is powerful and exemplifies the more mature direction this series is taking.

Artist Elena Casagrande draws very expressive faces. She has a firm control of tone and emotion. We can really see what Barbara is thinking in images like the closeup on her eyes as she reviews the murder scene page 6. This issue shows us Batgirl’s mental reconstructions of the crimes she’s investigating. It’s a little reminiscent of TV shows like Criminal Minds or CSI, except… y’know, not cheesy garbage (fight me!) The scenes at James’s cell in Arkham Asylum appear to deliberately homage The Silence Of The Lambs. The use of color by Jordie Bellaire in flashback panels is reminiscent of Francesco Francavilla’s awesome artwork in the Black Mirror story arc, when James Jr. first made his big splash. This issue also references an earlier meeting between Batgirl and James, which I’m now encouraged to track down and read in — *click clack internet search clickety clack* — Batgirl (New 52) #12-19.

Annuals can be kind of a crap shoot, but this is a really solid issue. It’s a good detective yarn from Mairghread Scott, and has me pretty sold on her writing going forward. It reads like a lot of Batman detective stories, but with Barbara’s personality and technical method of processing evidence with her eidetic memory (which I’m not convinced is a real thing, but whatevs). And Elena Casagrande’s art is really top notch. Check this one out y’all!

Brief rant: I’m not a fan of DC renumbering things every few years like Marvel has been doing for a while now. It’s silly that this is Batgirl Annual #2, not to be confused with the Batgirl Annual #2 from 2014, and also does not follow Batgirl Annual #1 from 2000. – Rob Veatch III

GRADE: A- (minus a half point for not starring Cassandra Cain)

“The Next Knight Rises”