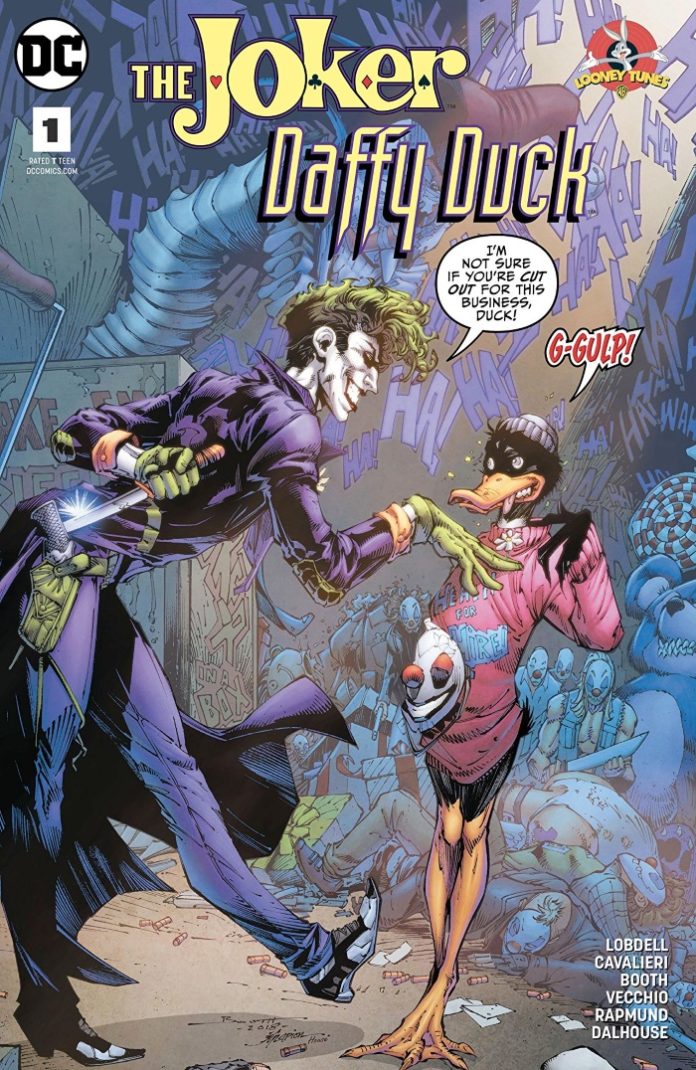 SYNOPSIS: When Daffy Duck pays a call to the Acme corporate headquarters in Gotham City, he finds the company long gone and their abandoned building now occupied by The Joker. With a hit in progress, Daffy tries to sneak away, only to find himself in the clutches of the Clown Prince of Crime. But Joker decides that there’s some potential in this manic bird and forces Daffy to join his gang. Will he find a way to escape…or will he become The Joker’s new right-hand duck?

When I first heard of these DC Comics/Looney Tunes comic book team-ups, I thought the idea was absolutely ridiculous.

And then I read ’em.

And they were good.

In fact, BATMAN/ELMUR FUDD was one of my favorite Batman comics of 2018 CLICK HERE to read my review from last year).

So, I got excited when I heard that DC was putting out a new round of ’em this year and looked forward to reading them.

While Batman’s not specifically teamed-up with a Looney Tunes character this year, there are three that fall within the world of Batman: CATWOMAN/TWEETY AND SYLVESTER, HARLEY QUINN/GOSSAMER, and THE JOKER/DAFFY DUCK.  I assigned myself the latter of these three to review here on BOF, so here we go…

I can’t think of a more perfect DC/Looney Tunes pairing for The Joker than Daffy Duck.  And yes, the whole premise is preposterous, but that’s what makes these things so much fun!

I’ll let you read the issue for yourself, but I will say that it’s very “Joker” and very “Daffy Duck.”  It’s not so much about The Joker and Daffy teaming-up — though they kinda do — but taking something goofy as hell and making it work.

There are two stories in this issue.  The first one is more “realistic” (i.e. done in modern comic book style), while the other is more “cartoony” (i.e. it looks like a LOONEY TUNES cartoon).  In the first, Daffy accidentally becomes the head of The Joker’s henchmen (don’t ask, just go with it).  The backup story features a really evil/crazy Joker vs. Dr. Daffy Duck, Psychologist in a psychological match-up in Arkham Asylum.

For me, the first story was better than the backup, but both were entertaining enough.

And in case you’re wondering, Batman does make a cameo appearance in this issue.

Overall, I found THE JOKER/DAFFY DUCK an OK read.  I did not enjoy it as much as BATMAN/ELMUR FUDD, but that’s most likely due to the fact that Batman wasn’t featured prominently.

If you haven’t checked out any of these DC/Looney Tunes comics, give ’em a try. – Bill “Jett” Ramey