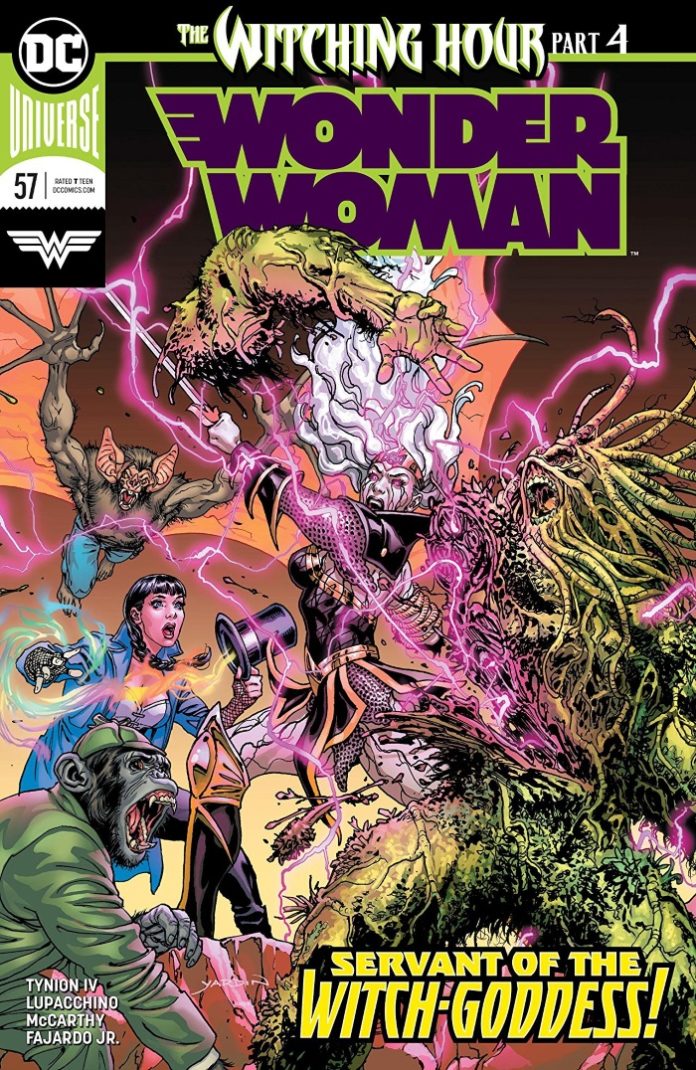 SYNOPSIS: “The Witching Hour” part four! As Hecate’s new world is born, Wonder Woman is under the goddess’ total control! This is magic’s darkest hour—one of the most powerful magicians of all time may not survive!

Hecate has fully dispossessed Wonder Woman’s mind from her body, banishing her to the Witch’s Moon, a silvery landscape occupied by the troublesome minds of the women possessed by Hecate’s Witchmark.

Breathe in with me.

We’ve just breathed a sigh of relief together.  Hesitant and cautious though it may be, it is still a sigh of relief that can be attributed to what happened in this chapter of “The Witching Hour” storyline.  The last couple of issues have been on the cusp of complete narrative disaster, with writer James Tynion IV overloading the pages with unholy amounts of exposition, but this issue, though not devoid of problems in this regard, is not nearly as ham-fisted.  Most of the characters get a little room to breathe, and Tynion introduces us to a fascinating new locale: The Witch’s Moon.

I’m a big fan of metaphorical constructs being represented as physical reality (I mean, who isn’t?) and that is what we get with this idea; Diana’s mind has been thrust from her body, and we see her washed up on the silvery shores of the Witch’s Moon.  It is ideas and captivating visuals like this that give me hope for this series.  The moon imagery and theme, though a bit heavy-handed at times, is very enjoyable.

And for the first time in a couple of issues, it feels like the characters are in charge of the story, which allows for a narrative flow that feels very organic.  The interactions with Wonder Woman and Witchfire are wonderful, as is the playful exchange between Zatanna and John Constantine.  The segments with Swamp Thing and Black Orchid are the weakest links, but overall this issue was a good palate cleanser for “The Witching Hour.”  And that last page is sure to have people talking.

The art by penciller Emanuela Lupacchino and colorist Romulo Fajardo Jr. is quite good for the most part, but their partnership truly shines on the pages with Wonder Woman and Witchfire trapped on the Witch’s Moon.  The monochrome vistas accentuated with a fully-colored Diana makes for a striking image.

This is a much better issue than the last few.  It’s simple: show us something we haven’t seen before, take us places we’ve never been, and let the characters’ actions move the story forward.  Perhaps that’s easier said than done, but if Tynion can keep on this path, we’re in for brighter days.  Or should it be darker days? (groan)

In either case, I’m looking forward to the conclusion of this story, which hits comic book stores next week.  Hopefully, Tynion can stick the landing, but even if he fumbles it, at least we can move onto the next adventure of  Justice League Dark. – John Funderburg

Yes, SHAZAM! is Part of the DC on Film Universe (and...