Alfred receives a distressing letter from his niece (who is not named Barbara nor does she resemble Alicia Silverstone) Daphne in regards to her weird new boss. Alfred shows the letter to Bruce and shortly afterward, The Batman goes in search of Daphne.

Batman discovers the location where Daphne is being held captive – Gothos Mansion. After taking out a few of the manor’s guards, Batman finds Daphne – who is/was about to be sacrificed by a cult of devil worshipers in order to raise the demon, Balik.

During the course of freeing Daphne, The Batman is caught by the cult’s leader and put into a death trap that will slowly hang The Dark Knight. Of course, no death trap can actually take out Batman! The Caped Crusader escapes and saves, yet narrowly, Daphne. 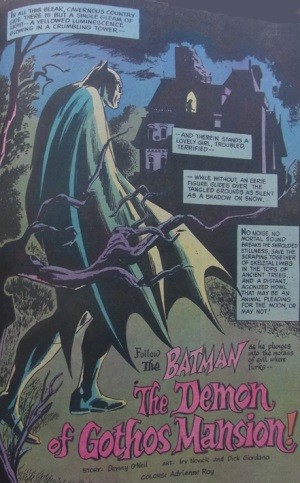 Yes, this is certainly a “dark” Batman story, but a bit too much of the supernatural for my personal Batman taste.

Batman falls in love with a ghost?  Really?

On the other hand, I’ll take this over Batman blasting off into space and fighting alien magical monsters!

What’s so important about BATMAN #227 The awesome and classic cover by Neal Adams. Also, it was one of the very first BATMAN stories written by the legendary Denny O’Neil. With all that said, “The Demon of Gothos Mansion!” and the cover of BATMAN #227 are both nods to and based on another classic Batman comic book cover and story in DETECTIVE COMICS #31 from 1940.

Of note, Matt Wagner more recently reimagined both the story and cover from DETECTIVE COMICS #31 in BATMAN AND THE MAD MONK.

BATMAN #227/”The Demon of Gothos Mansion!” was written by Denny O’Neil, penciled by Irv Novick, inked by Dick Giordano, and edited by Julius Schwartz with cover artwork by Neal Adams. It cost 15 cents and has a cover date of December 1970.

“The Demon of Gothos Mansion!” from BATMAN #227 made Michael Uslan’s list of the most important Batman comic book stories from 1939 to 1979. The story can be found reprinted in various collections and comics, including Showcase Presents Batman Vol. 5. – Bill “Jett” Ramey