In 1965 (the year of the birth of yours truly), Batman in comics continued to be altered. Batman’s comic book adventures continued to move away from the fantastical and sci-fi, and back to Batman’s roots with detective stories. Of course, the sci-fi aspect would still pop up from time to time with parallel universes, time travel, etc., as it wasn’t totally eliminated. Also in 1965, The Riddler returned for the first time since 1948 and the BATMAN comic book got a new logo.

FEBRUARY: The Penguin returns from prison to take on the Dynamic Duo in BATMAN #168’s “Partners in Plunder” feature story.

MAY: The Riddler returns to the pages of a Batman comic book for the first time since 1948. in the story, “The Remarkable Ruse of the Riddler!” in BATMAN #171. This story would inspire the first two episodes of the BATMAN TV series the next year, “Hi Diddle Riddle/Smack in the Middle.” 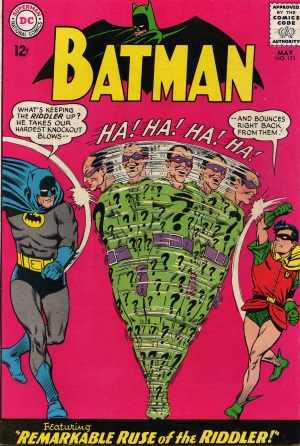 JULY: The Joker returns and commits a string of robberies while impersonating famous silent film comedians in “The Joker’s Comedy Capers” in DETECTIVE COMICS #341.

OCTOBER: In the month and year of my birth, the only Batman comic book published by DC Comics was DETECTIVE COMICS #344 where Batman took on Johnny Witts in “The Crime Boss Who Was Always One Step Ahead of Batman!”

NOVEMBER: Batman and Robin encounter Mark Desmond, AKA “The Blockbuster” in DETECTIVE COMICS #345. In this story, Bruce Wayne proved to be of more greater use than The Batman.

The DCEU is Dead, Long Live the New DCU…and THE BATMAN...