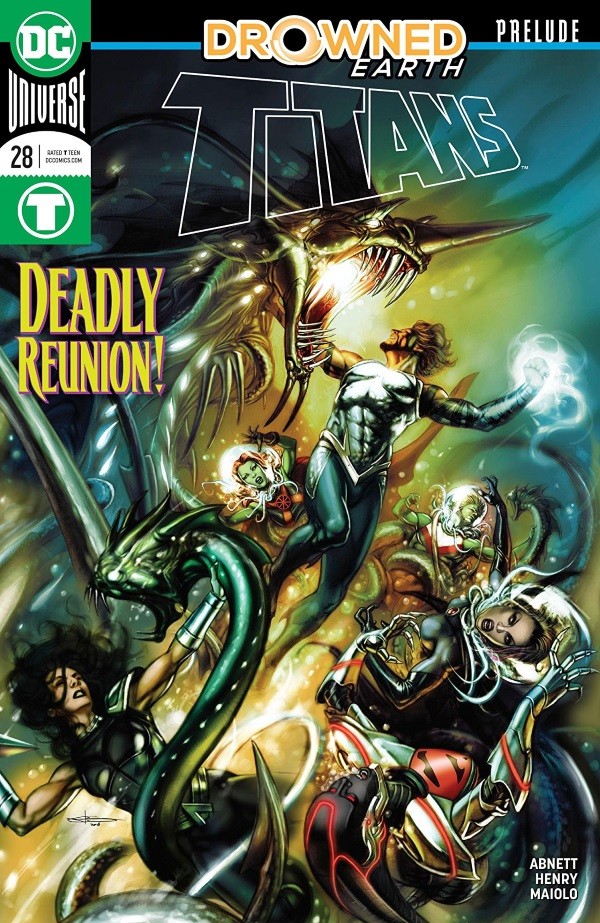 SYNOPSIS: Then, in a tie-in to the road to “Drowned Earth,” the Titans get a visit from an old teammate when Atlantean mage Tempest guest-stars in the ish. What’s got Garth’s fishnets in a twist? He’s there to help the new Titans lineup take on a major oceanic threat, whose attack comes straight out of the pages of Justice League and Aquaman. Guess you could say that prelude “spills over” into TITANS this month.

The Titans are still reeling from the absence of Nightwing. While dealing with the uncertainty and grief his condition brings, they are called into level action (thanks to a Justice League crossover). A water-based alien invasion is underway and it has brought the return of former member Tempest to the group. His influence and bravado rejuvenates the downtrodden team, but also sends them on a reckless mission that they may not come back from.

Titans is officially on a little bit of a hot streak with recent issues. Since Dick (excuse me, Ric, even though the team hasn’t gotten to that point yet), the book has shifted its focus to Donna Troy, and I think it is better for it. When the team formed, we saw hints that Donna was not in a good place (trying to get drunk before missions is not ideal). Now she has to deal with that, Nightwing being gone, AND the team looking to her as a leader. She doesn’t know how to handle it, which makes her the perfect character to focus on. Everyone on the team is broken and unsure of the group, Donna is unsure of herself as a person (if you look up her convoluted history, you’ll understand why it’s hard for any to know what’s going on with Donna Troy), they have managed to make her the metaphor for the team and it’s working.

Bringing in Tempest is a fun move He fits into this water-based Justice League crossover while giving that old school Titans connection needed to develop the team through Donna. His insistence to act like the Titans of old gets the action rolling, and makes Donna really come alive for the first time in this run. Not coincidentally, it is the first time the Titans feel like a team and not just a collection of characters.

While my excitement is transparent, it’s not all rainbows and waterfalls. I know I’m behind on my readings, but I had no idea this crossover was coming and know nothing about who these aliens are and what they want. The issue really tried to feel like a standalone, which worked for the most part, but It could have used a quick recap of how we got here, and who these guys are. Even though they were faceless villains (for the most part) they have been the most formidable the book has seen thus far (some have potential, but it’s not there yet).

Titans hasn’t been bad, but I definitely felt like I was forcing myself to like the series in the beginning. The last two issues have been a vast improvement, and I hope it continues down this road. Now may be a good time to give the book a serious look. – E. Chad Metz