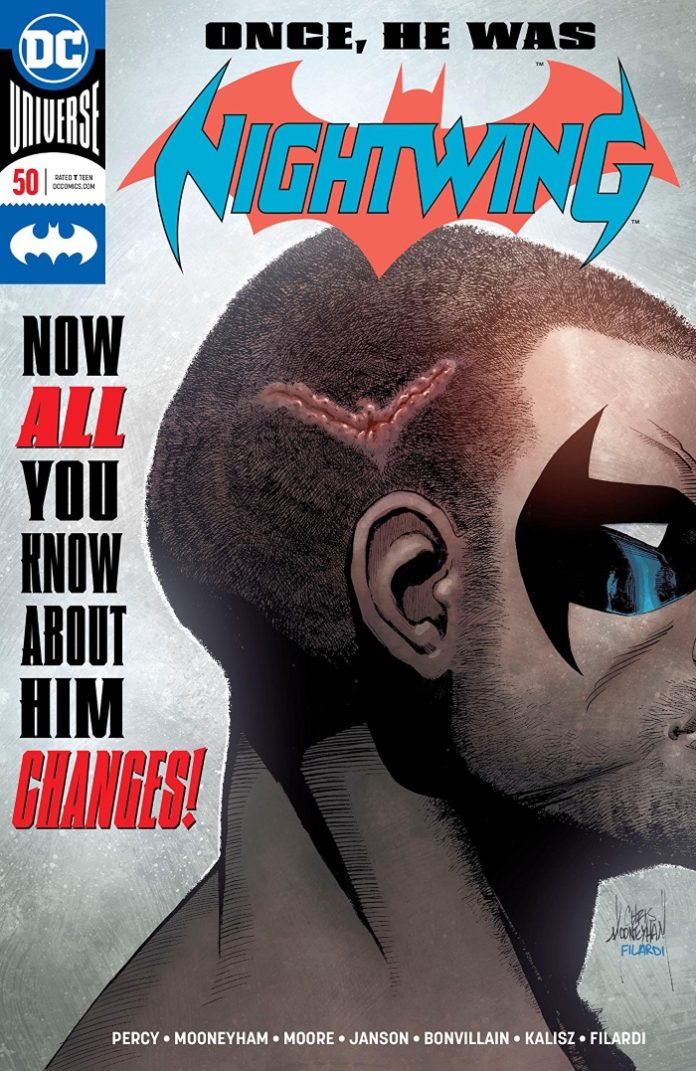 SYNOPSIS: “Knight Terrors” begins here! The big issue #50 kicks off an epic four-part story that brings together critical moments of fear and doubt from the past and the present. A young Dick Grayson hopes to escape the shadow of the Bat and earn the title of Nightwing, while an older Dick Grayson must deal with a blow he did not see coming. A common enemy unites the timelines: the Scarecrow, as you’ve never seen him before! This story goes deep into the mythology and nightmarish development of Dr. Jonathan Crane.

As a long-time Batman fan who finally dived into comics three years ago, I have a confession I’d like to make public: Nightwing is a better character.

Nightwing/Dick Grayson is the more achievable Batman, as far as we can apply that word to any fictional character with one step out of reality.

Batman will always call Wayne Manor his home and Wayne Enterprises his occupation. Whenever he changes locale or stops being Batman, us Batfans tend to get a little ticked off.

Grayson is constantly moving and taking on odd-jobs here and there. He can be presented as a Gotham sidekick, Bludhaven/Chicago superhero or even a globe-trotting secret agent it feels right to the reader.

To steal a line from Catwoman, he’s adaptable.

Nightwing #50 sticks to Grayson’s mantra of moving on. This time he’s moving away from his life and name altogether. After being shot in the head in Batman #55 Grayson has practically no memory of who he was and is fine with that.

Writer Benjamin Percy has Grayson describe his condition by saying, “The jumps in consciousness come on like the black nothings between TV stations.” Damn good line.

Grayson is squatting at rich people’s homes, gambling, drinking and going under multiple names from Dick, Gray, Ric, and Burl. Not sure why Burl and not Burt. Come on, give Burt Ward a shout out!

This builds-up to an especially heartbreaking moment with him and Barbara Gordon.

Both the Batman and Nightwing comics have done a fine job at flashing back to the glory days of the Dynamic Duo and I’m enjoying every panel of it. I don’t think many of us will get tired of seeing Grayson, or any Robin, cracking wise while Batman remains stoic.

Here we get flashbacks to Grayson’s Robin days as he and Batman take down the Scarecrow. In what may be a first, please correct me if I am wrong, we see what Robin would look like as someone’s fear gas mirage.

All the while we’re given hints that Robin is tired of the sidekick life and is ready to move on (like he does best). Meanwhile, Scarecrow plots his revenge against the Boy Wonder.

This issue also succeeds in what is certainly the ulterior motive of every comic: make me want to subscribe to more comics!

Since Grayson was Batman’s go-to morale booster in Tom King’s current Batman line, I’m already bracing for the impact this will have on the Dark Knight. Likewise, Grayson’s treatment of Barbara in this issue was an especially rough gut-punch after their more tender time in Batgirl #25.

I’m still burned that Nightwing’s battle against the Dark Web/Wyrm got sidelined, but feel better because of the content of this story. Plus they were kind enough to have “Feed the Wyrm” graffiti still lingering around Bludhaven.

That said, did anyone ever rescue Vikki Vale and Willem Cloke? Can we get some superhero on that, please? – James Armstrong