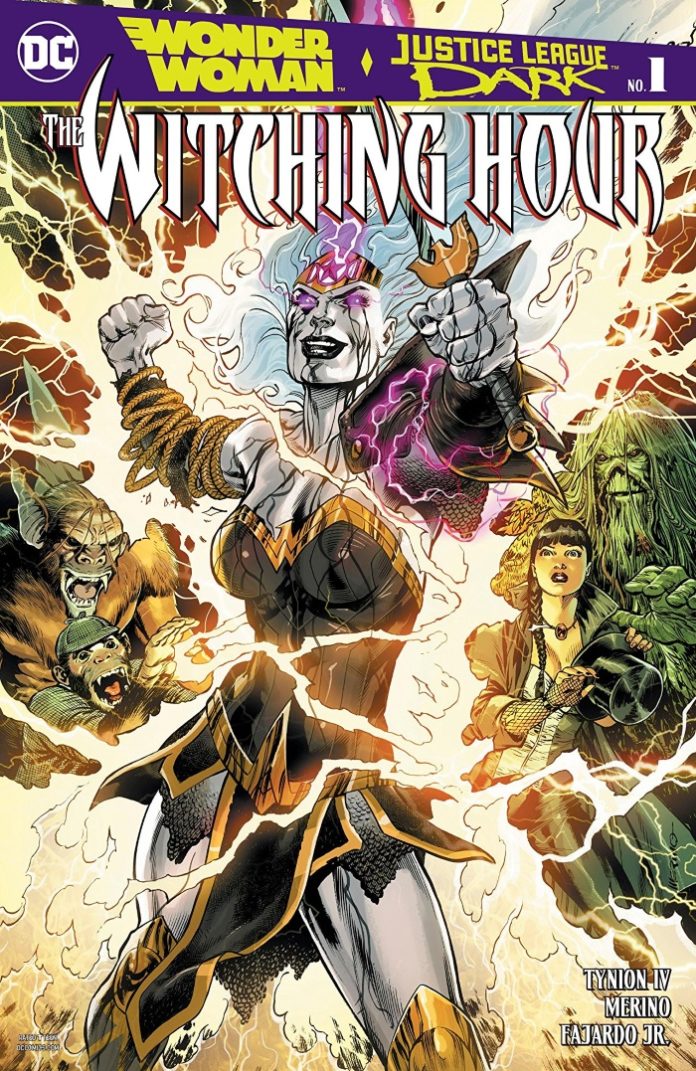 SYNOPSIS: Just in time for Halloween, it’s “The Witching Hour,” a five-part weekly event that will rewrite the future of DC’s magical heroes!

Hecate, the witch-goddess of magic, always knew a day would come when the monsters she stole her magic from would return. Now she must activate the Witchmarked, humans within whom she secreted vast stores of power. And the most powerful of the Witchmarked? Wonder Woman!

The Witchmother has arrived, and she’s here to take back what she left imprinted on Diana Prince many years ago…  It is a memory that has become lost in Wonder Woman’s mind…

The last issue of Justice League Dark gave us a peek at a different side of Wonder Woman: a pale warrior exploding in white light, surging with uncontrollable power.  I was hoping we would get another glimpse of this side of her, and it turns out I didn’t have to wait very long.

“The Witching Hour” Part 1 brings us right into Wonder Woman’s struggle with this raw, newfound power.  Though she doesn’t know it yet, she’s been witchmarked by Hecate, the triune goddess of magic.  Diana spends the pages of this issue wisely trying to determine what, or perhaps who, is causing these unforeseen transformations, and this focused plot yields a compelling story.  Even though we love her as a character, it is refreshing to see Wonder Woman vulnerable, exposed, and afraid of what may burst forth from her at any moment.

Creator of Diana’s fearsome burden is the witch goddess Hecate, whose nearly omnipresent creepiness, lurking in shadows and reflections, adds an edge of increasing anxiety to the story.  Hecate has thrown Wonder Woman into a state of panic, and on top of that, we discover that she is also able to effortlessly manipulate the Justice League, which is no small feat.  She is a capable antagonist, and she certainly makes a more alluring villain than The Upside Down Man.

While the story largely revolves around Wonder Woman, the other characters get serviceable treatment: Swamp Thing and Professor Chimp have a humorous exchange about mulch, John Constantine witnesses the fiery annihilation of a coven of witches at the hand of Hecate, and Zatanna drives the story forward by assisting Wonder Woman in her quest to discover the source of the rune-like brand hidden beneath her tiara.  The only character that feels entirely underused is Kirk Langstrom, the Man-Bat.  He’s just sort of there.  I hope that Tynion has better plans for him in future issues.

All in all, the major character beats make up for Man-Bat’s general misuse.  As I mentioned in my review of Justice League Dark #3 from last week, I love the backstory we are getting of Diana and Zatanna.  In this issue, we finally get to revisit what happened the night young Diana stumbled across a secret meeting of the Witch Women, and what they did to her under the full Themysciran moon.

Art by Jesus Merino and colors by Romulo Fajardo Jr. are excellent throughout, but I’ve gotten used to the strong, moody pencils and dynamic layouts of Alvaro Martínez Bueno and the muted yet gorgeous colors of Brad Anderson.  I await their return in Justice League Dark #4.

That being said, let me take a minute to give high praise to Merino and Farjado for the cover art on this issue, which is truly awesome.  They capture the wild, untamed nature of a fully-possessed Wonder Woman erupting in a display of electrifying power.  And if that cover wasn’t good enough, the variant cover by Riccardo Federici is even better: Wonder Woman, shown as a ghoulish witch, lends us a malicious smile, looking positively evil.  I said it in my last review, and I’ll say it again… I really dig this look.

Overall, this is a good series so far, but it lacks greatness.  Each installment has been worth your time, but I’m looking for Tynion and Co. to dig deep and give us something that will make us gasp, make us salivate, make us sleep with the nightlight on and the bedroom door cracked a bit…

All the pieces of greatness are here; I hope we get it in the coming months. – John Funderburg