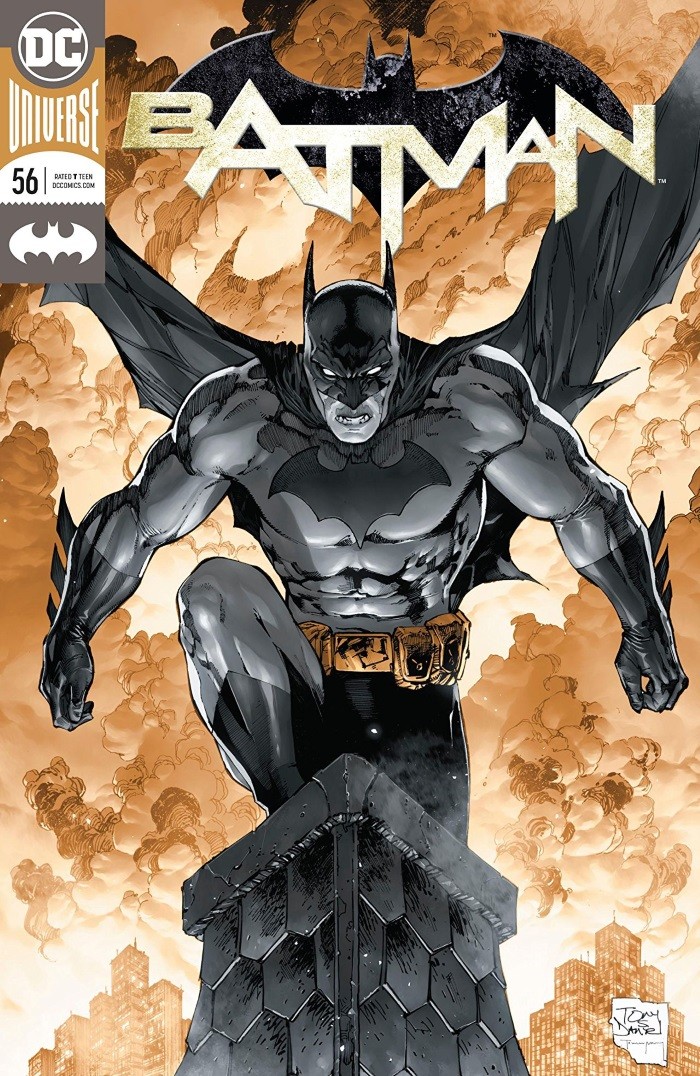 SYNOPSIS: The Dark Knight’s looking to drop both the hammer and sickle on the KGBeast, whose rampage across Gotham City takes a toll on Nightwing when he’s injured in the fray. Blaming himself for his ward’s fate, Batman gets grimmer than usual—and vows to take the Russian assassin down like the Berlin Wall. Is even Gotham City ready for that much violence? The streets will run red like borscht if the Dark Knight gets his way against this Soviet scourge.

BATMAN #56 begins as #55 ended, with a BANG! This time it’s banging on a door in snow-smothered Mother Russia, as opposed to the rifle bang that recently put a bullet across Nightwing’s noggin. But the door banging begets shotgun banging; the knocker is KGBeast, the shooter is his dear old dad, and elsewhere, in Gotham City, Batman is mad.

“Can you find him?” Writer Tom King’s take on Alfred has been mostly one of humor and heart, but this time Pennyworth’s all business. “Yeah,” Bruce Wayne answers. “I can find him.” King keeps things both mysterious and momentous by not even telling us how Dick Grayson’s doing; you’ll have to check out NIGHTWING #50 (also out today) for that answer. In this issue, King and artist Tony Daniel take on the titanic task of telling the tale of what Batman does next.

After two consecutive stories exploring the bond between Bruce and Dick, it’s fascinating to see how differently KGBeast and his father approach their relationship and each other. These pages alternate with Batman’s quest to find Dick’s shooter. He knows who it is. He just needs to know where. His quest takes him across the globe, where he shares an action-packed physical challenge with an ally against ninjas and later breaks out his impeccable powers of intellect, intimidation, and escape against an enemy. Both encounters illustrate how awesome this man is in his element, with the final pages beautifully (and brutally) building to a snowy showdown we’ll have to wait two weeks to see.

Mystery proliferates the proceedings. KGBeast clearly wouldn’t have missed Dick’s forehead if his actual intention had been to kill him, which means this is almost certainly an extension of Bane’s big plot to break Batman all over again. Bruce’s ninja-battling buddy even says it explicitly — first, his lady leaves him, now his son has been hurt. How much can one man take? The answer is “the most,” because he’s Batman, even though I’m starting to get a little bit of misery fatigue from this book. We’ve seen the fallout of heartbreak and loss upon Bruce so many times, and I still wish King had gone through with the wedding if only to see how Batman and Catwoman would have adapted to being newlyweds in a world that can’t possibly know how to process their pairing.

And yet! King continues to keep things fresh and unique, and Daniel’s pencils (with inks by Danny Miki) pass every test. Facial expressions do a lot of this issue’s heavy lifting, and colorist Tomeu Morey makes the mood of each environment distinct. (I especially love how the dark lines of Batman stand out against a blizzard.) Letter-man Clayton Cowles has a big job in this one, too, and I love how he blots out bits of the dialogue as Batman loses signal to the weather. It helps establish what promises to be an isolated and primal battle in two weeks; thanks to this creative team, I’m as ready for it as Batman is. – John Bierly