VENOM: LET THERE BE CARNAGE Review by JoAnne Hyde 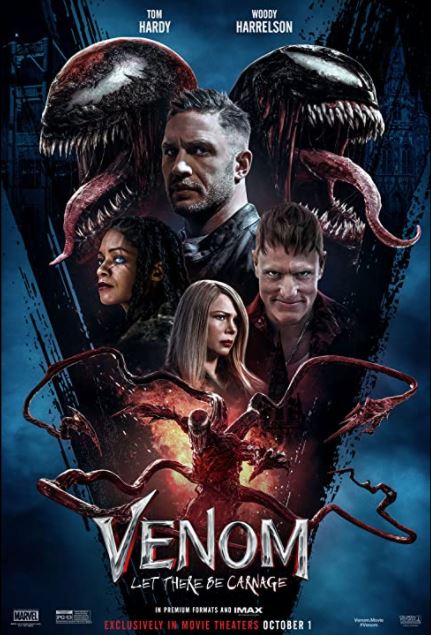 Venom: Let There Be Carnage is a bit of a hot mess.

2018’s Venom had some redeeming qualities. This one — not so much. Thankfully, it’s not long, only 97 minutes. As far as clarifying Venom’s place in the Marvel Cinematic Universe, I’d have to say the film is unsuccessful. Its rumored connection to the upcoming new Spider-Man film — SPIDER-MAN: NO WAY HOME — is tenuous at best.

Tom Hardy returns as Eddie Brock/Venom. He continues as the bumbling, self-destructive journalist who botched most of his opportunities to return to relevance, and unfortunately, in this film, it’s just annoying. His “conversations” with Venom — the alien symbiote his body hosts — seem a bit disjointed this time around with a little too much lag time between responses. Hardy has some good moments, but not nearly enough.

Michelle Williams returns as Anne Weying, but again, her talent is mostly wasted. During the final quarter of the film, she finally gets a chance to be an integral part of the narrative. Her fiancé, Dr. Dan Lewis, is again played by Reid Scott, who gives one of the better performances in the film. He also gets a chance to be heroic this time around.

Woody Harrelson’s character, serial killer/host for Carnage Cletus Kasady, hounds Eddie and teases a big reveal about his criminal career to lure him into an interview just before he’s to be executed. It doesn’t go as planned and ends up unleashing Carnage. Needless to say, Cletus/Carnage escapes and goes looking for his love interest Frances Barrison/Shriek (Naomie Harris).

Chaos ensues as Anne is taken prisoner, and Eddie/Venom rush to save the day. The final confrontation between the two symbiotes is quite dramatic and, saying the least, significantly affects one’s future in MCU and/or Spiderverse.

Venom: Let There Be Carnage suffers from too much CGI and choppy editing. It’s flat-out tiring. Mix that with a frenetic kaleidoscope of color and an overdone rap/hip hop score, and it ends up being mainly confusing. That said, there’s a rumored third installment of the franchise, so there is a mid-credits extra scene, which was also confusing.

I eavesdropped on a spirited conversation among 3 younger fans/reviewers, and they were trying to figure out how this film fits into the MCU and/or Spiderverse. There was no consensus. Their reactions were for 2 of them “meh” and for 1, outright dislike. I guess I’m somewhere in between. I think it will play well to a teen audience. – JoAnne Hyde