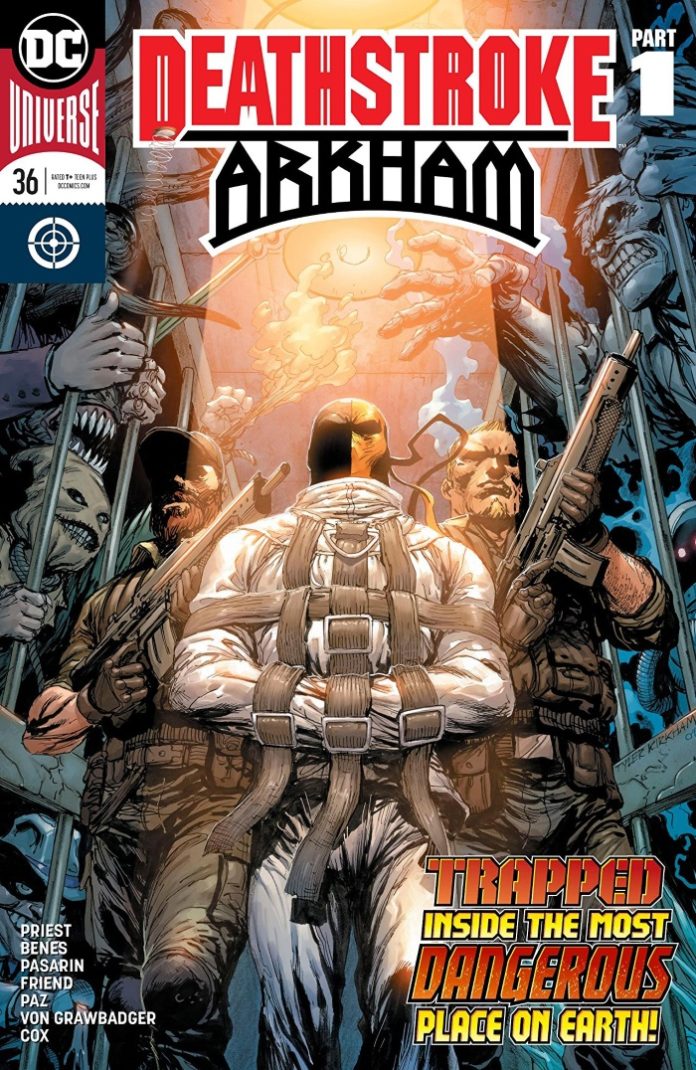 SYNOPSIS: “Deathstroke: Arkham” starts here! After being declared criminally insane, Deathstroke is committed to the infamous Arkham Asylum! It isn’t long before the hunter becomes the hunted as Slade, powerless and weaponless, is targeted by some of Gotham City’s most wanted. But after initially mocking and contravening the system meant to help him, Deathstroke learns that his only hope for survival may be to confront his own inner demons.

One may say the best thing about Priest’s run on Deathstroke is that he has complete creative freedom.  You could say it’s his ability to keep the reader guessing or it’s the cast of characters across the DCU who have been intricate to each story. None of those are wrong answers.  Priest has provided stories with Bruce Wayne, Batman and Robin, both Titans teams and the League of Shadows. Now Deathstroke is in Batman’s backyard, locked up in Arkham Asylum.

There has been a lot of Batman in Priest’s Deathstroke and the influence continues.  Right off the bat we are introduced into the latest set of twists and turns.  Priest is at his best when he misleads the reader.  The opening the book was gruesome and jaw dropping, not what you are expecting. Priest writes a heavy book, be prepared to re-read. There is a lot to pick up on and events from previous stories that you will have you going back to refresh your memory. At times it does seem that Priest is trying to dig too deep. Seeing Slade’s determination and bravado keeps the reader invested while making me think of the film Shutter Island. Then, almost out of nowhere a wonderful splash page ending that throws me off the trail and has me guessing what will happen next.

Ed Benes and Fernando Pasarin provide the interior art.  While we are all aware of just how talented Benes is I believe this is the first time I have seen work from Pasarin. The artwork actually overshadows and takes most of the accolades. The book opens with seven pages of action panels and lock screens. At times it looks like a horror comic and at others, it’s action-heavy but well balanced. My only nitpick is I wasn’t into the way Two-Face was drawn on the scared side. Cameos from the Gotham Underground do not disappoint, as Harley and Riddler steal their scenes.

Deathstroke 36 is an interesting read; the premise of having the worlds greatest assassin locked up in Arkham should spark the interest of any DC fan.  While the artwork is the best part of the book the story does show promise.  Priest is trying to craft a psychical thriller like Shutter Island mixed in with the Prison Break.  This seems like it will be a slow burn but will have some pay off if you can stick through how deep it can be. The finale of the book does leave us with some interesting questions and looks to set up a potentially fun ride.

PS: Can’t wait to see all the BOF’ers at NYCC this week. I’ll keep an eye out for BOF T-shirts. I’ll be wearing one of mine! – Pete Verra