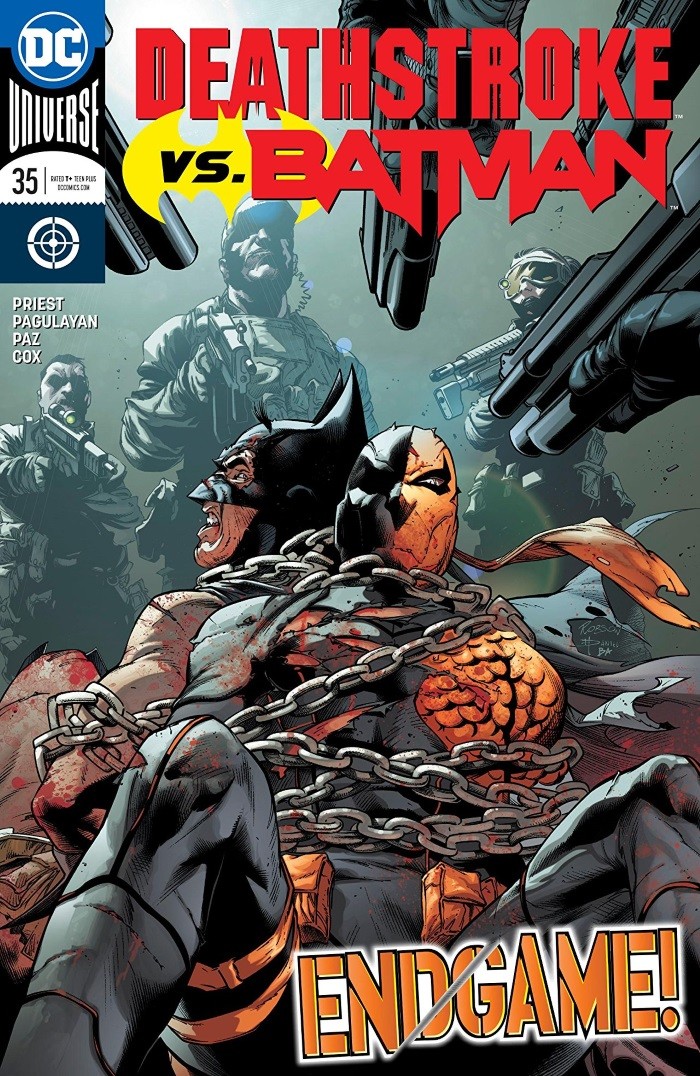 SYNOPSIS: In this corner: Deathstroke, suffering from a traumatic brain injury at the hands of Batman! In the other corner: Batman, with Deathstroke’s knife in his gut! All of this with the feds invading Wayne Manor-and now they’re in the catacombs under the mansion, which lead to the you-know-what-cave! If they’re going to escape, Batman and Slade are going to have to work together.

The conclusion of “Deathstroke vs Batman” has Priest dropping breadcrumbs up until the very end in the most head scratching fashion.  Throughout this arc we were shown just how similar these two really are. From sidekicks, confidants, and girlfriends Deathstroke and Batman seemed to reflect one and other.  The Dark Knight and The Terminator have been matching wits while simultaneously trying to figure out who is Damien’s father and who set up the man who is not.

There are quite a few flash backs in the book, but the most shocking one is a scene between Alfred and Robin, who is wearing his “One Year Later” threads. You really get a sense of how hurt Robin was when Damien arrived. He was so bothered by Bruce’s actions it uncharacteristically sent The Boy Wonder off the deep end. Purists (ELTD crew, I’m dying to hear your thoughts) might not take to kindly to the liberties Priest has taken here to move his plot along at Tim’s expense. Throughout the arc the pairing of Wintergreen and Alfred is wonderfully written showing how much they care about their masters. Priest uses just the right amount of tough love and attitude. This was probably the most consistent part of the arc. The banter between our main characters is as good as it’s been in the series, as both of them work together to escape certain death and/or being captured by the FBI. Trading insults, punches, and theories as they work together is a real pleasure. The ending between Bruce and Alfred is definitive and both are emotionally invested as they sit by the fire discussing war stories.  Priest provides all the details into who Damien’s father really is, but it may just be a bit too convoluted in how he gets us there.

Carlo Pagulayan is the interior artist on the book.  While the art in the book is very good, Pagulayan’s Batman looks different. The ears on the cowl seem considerably shorter than what we have seen previously, looking very Year One/Batfleck.  In one panel, the ears look sunk in on the side, similar to what you would see in Batman ‘66. I’m not saying it looks bad, but it’s just a bit inconsistent with what we have seen previously. Seeing the “One Year” Later Robin suit is such a treat.  It also happens to be one of my favorite Robin suits of all time. The “Iggy” scene is drawn beautifully, with shadows and streaks of light really working well together all while paying tribute to Tynion’s Detective run in two panels. Again, the books are drawn superbly and enjoyable to flip through.  Batman just looks different.

There are parts of this issue that are very good and jaw dropping, but it just falls a bit flat. It’s a bit of a letdown since the previous issues all built up to what should have been an epic conclusion. This almost feels like Priest got just a bit too cocky here and didn’t quite stick the landing.  With Jericho as the unsung hero of the story I felt like this issue just didn’t live upto what came before it.  I often questioned what was going on and even felt a bit confused. Very unlike the craftsmanship I have come to expect from Priest.  Now I won’t tell you not to buy this issue since it is the conclusion to what has been a very, very good arc.  Even if it’s a bit of a letdown, you do get all the answers to the questions we’ve been asking since this story began.

Priest will be joined by fan favorite artist Ed Benes in the next issue, Deathstroke #36. After being declared insane, Slade Wilson is committed to our favorite nut house Arkham Asylum! I know I’m just as excited for this as I was for “Deathstroke vs Batman.” The issue drops 10/3/18.

THE BATMAN | Matt Reeves’ Bat-Film Was Never Meant to be...