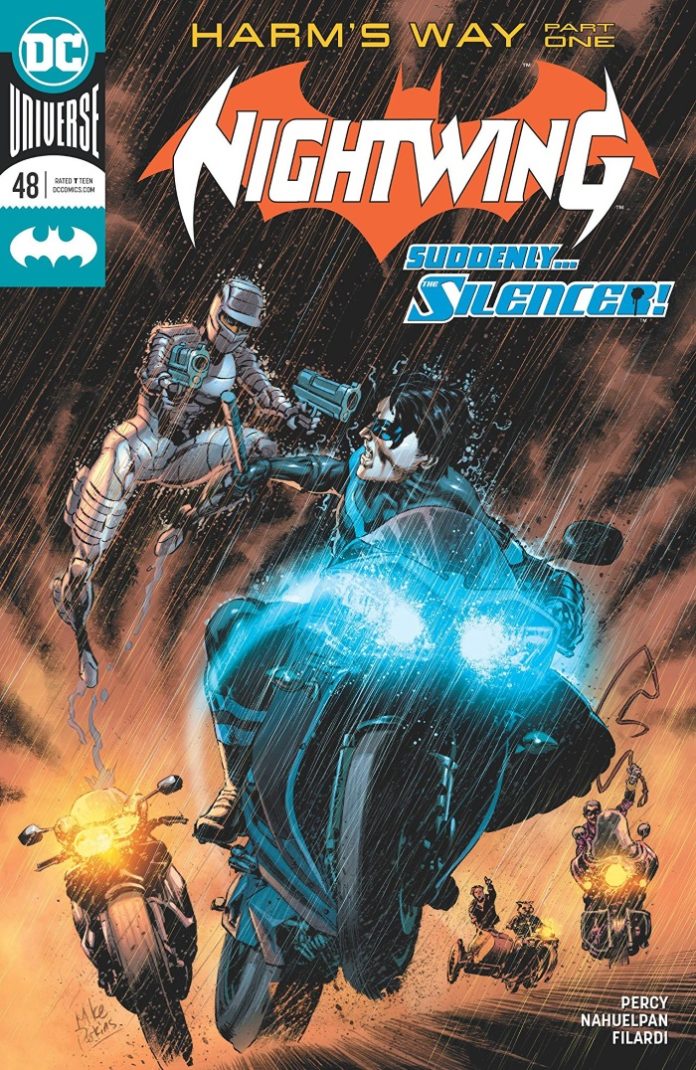 SYNOPSIS: Guest-starring the Silencer! Dick Grayson is forced to participate in the world’s greatest motorcycle  race, a three-day affair hosted on a remote island and populated by the greatest riders on the planet. Nightwing reluctantly complies, but only to save the life of an old friend. That brings him into competition with the Silencer, who’s also racing to save a friend. Only one rider can win…so who’s gonna leg this one out? That’s if they survive the onslaught of super-criminals in the race as well.

Nightwing is at his best when he goes mobile.

As he said himself in last week’s NIGHTWING ANNUAL #1, he’s “never really had a home…so I guess you could say the whole world is mine to defend.”

We open the “Harm’s Way” storyline with Nightwing arriving at the Isle of Harm off the coast of Ireland. He is forced by the cyber terrorist group Wyrm to participate in the Isle’s deadly, and rather fantastical, race in order to secure the release of his friends Vicki Vale and Willem Cloke.

The victor gets to stand at the Pathway Altar, described as “a cosmic Google that can access deep time and space,” and ask one question that will be answered with absolute certainty. Nightwing is to plant a device in the system so Wyrm can wire into the mainframe.

I couldn’t help but take a cautious breath as the race was slowly introduced. After all, the last time I saw Dick Grayson take part in a deadly race was in 1997’s BATMAN & ROBIN.

That feeling only lasted a second as the fantasy elements of the competition vastly set it apart from that movie. The cosmic roads stretch beyond the size of the island and pledging to participate in the race requires drinking from the skull of the druid who paved the roads.

Amancay Nahuelpan (pronounced Aman-kay Na-well-pan according to his Twitter bio) handled the art on this issue. His previous credits include the “Clandestino” series, “Calexit” and “Boy-1.”

The backgrounds are fun to look over, especially in the bar scene, and only get better when re-reading the issue. I love that we see a robot rider just chillin’ out and drinking some oil while everyone else enjoys beer and spirits.

We’re also treated to two great cameos from Grant Morrison’s series from the last decade when Grayson took over as Batman. The bartender even pokes fun at Nightwing and calls him, “Batman Jr.”

It’s no spoiler since she’s featured on the cover, but DC newcomer Silencer appears in this issue as another competitor in the race. I was not familiar with this character, but her January 31st preview issue by John Romita Jr. and Dan Abnett is available for free on DC’s website.

Luckily, unlike BATMAN & ROBIN, I didn’t see Coolio drawn in there somewhere.

I wanted to give this one a higher grade because of the art, but being part one of a new storyline a lot will depend on how it develops in later issues. I’m especially curious what question Grayson may get to ask if he reaches the altar. – James Armstrong