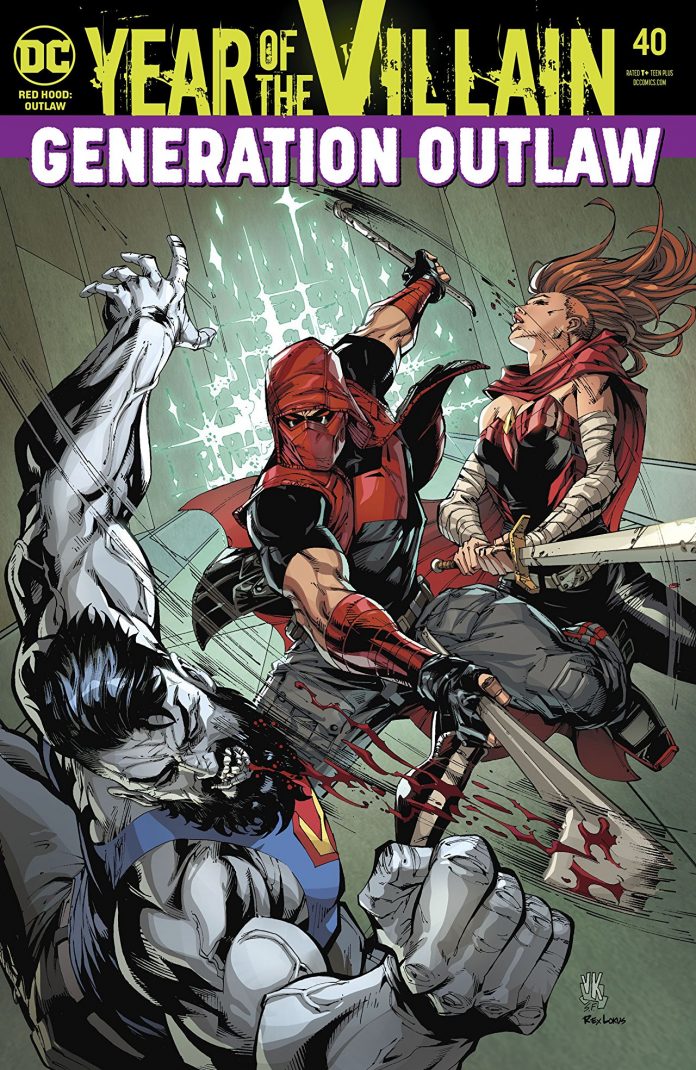 SYNOPSIS: After their first mission in the field, all the Outlaws want is to head back to the Block for some R&R. Unfortunately, no sooner do they get home than they find themselves under assault from Shay Veritas’ clones! It’s like Night of the Living Duplicates in there, and Red Hood is nowhere to be found. Is he teaching them a dangerous (but hopefully valuable) lesson with his absence, or is he dealing with something even bigger and more terrifying?

Doom has come to the DCU, but Red Hood and Generation Outlaw are more concerned with what’s going on with Dr. Veritas back at the Block! After a ridiculous scene of the team using a rideshare, they teleport back to base. The timing of the “Doom Signal” across the DCU hasn’t flowed particularly smooth for me, given its contradictory appearances across Batman, Detective, and Justice League, but I don’t see any problems with it here.

I haven’t quite gotten the “future villain” vibe off these kids yet. They’re malcontent at best, but it feels like Lobdell is putting a little more effort into making them feel villainous. Things like Devour proclaiming rescuing people isn’t really his thing or Cloud 9 inquiring what the point of being a villain is if you can’t kill those who piss you off helps sell their allegiance. However, observations like Jason thinking that he’s surprised they haven’t already killed each other don’t hold much weight when we haven’t really seen them do anything but name-call.

In fact, looking at the rest of the group, I’m still not seeing a whole lot of malevolence. Sure, Babe in Arms has a one-sided conversation with her dead mom about ruling the world, but it comes off as a creepy Baby Stewie Family Guy parody more than anything else. I did like the vulnerability Babe showed, however. DNA and Doomed are the least wicked, especially as they are embarking upon a burgeoning romance. If anyone is renouncing Luthor, it would be these two.

Jason’s narration is the best part of the issue. Using his experiences training with Batman continues to be the only touchstone he has when dealing with these upstarts. It’s a different dynamic than B and Artemis and Lobdell infuses a lot of humorous beats, from crowbar references that are oddly specific to Jason’s denial of Veritas being his girlfriend.

David Messina gives Rocafort a break this issue by handling the art. His work assists Lobdell with the more Looney Toons aspects of the story, particularly over-exaggerated reactions, yet can still make the Red Hood look cool and dangerous, too. I wouldn’t say no to him spending more time on this title if Rocafort is busy.

The issue concludes with something I’ve been hoping to see since I started covering this book, but it comes out of nowhere. Hopefully, we’ll get an explanation next month.

This entry was a step up from last month. Still not perfect, but I enjoyed reading it. Lobdell certainly knows how to end with a cliffhanger that makes you want to see what comes next and the bits of characterization he brought made the new supporting characters feel a titch more developed than in times past. I’m looking forward to getting some answers hopefully in the next installment. – Javier E. Trujillo