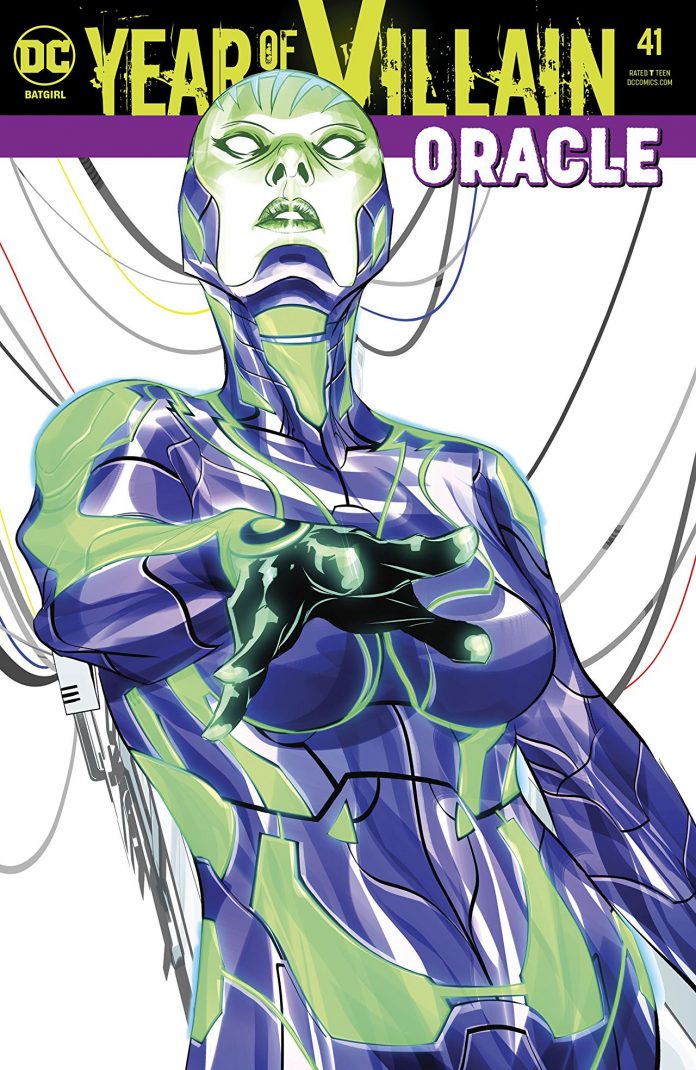 SYNOPSIS: After a disastrous defeat at the hands of Oracle, Batgirl must find a way to pick up the pieces of her shattered life. But all the while Babs must ask herself how she can defeat a nemesis who knows her every move before she makes it!

Our story picks up with Batgirl sinking down into the waters surrounding Burnside as fiery debris crashes down around her. Batgirl uses a rebreather to swim a safe distance away from Oracle undetected and make it to the surface just barely alive. I had assumed that a rebreather was just an easy piece of science fiction to allow super spies and vigilantes to breathe underwater, but it turns out it’s a real thing. The difference is that the real apparatus is a whole series of tubes and tanks that fit around the diver’s torso, but in Batman comics and cartoons, it’s just a little mouthpiece small enough to fit in the good ol’ utility belt.

Above ground, the Terrible Trio is happy to celebrate Batgirl’s demise, while Oracle is cautious not to take this conclusion for granted. She rounds up Frankie both for her knowledge about Batgirl, and as a potential hostage should Batgirl return to challenge them again.

In between cross-country flights, Luciana Alejo, Izzy and Jason Bard discuss how to handle the situation in Burnside, ultimately sending Jason back to check on things. It seems that the writing staff of this comic is sort of shifting Alejo from an honorable difference-maker to a callous politician concerned mostly with optics. Bard combs the streets looking for Barbara, gets captured by Oracle, and assures her that he wants to take down Batgirl as much as she does. Is he forming a genuine alliance or merely using this to get in close and act as a saboteur to Oracle’s plans?

Okay, so in the middle of this issue, Oracle activates a bunch of various robots, some of which are robot bunnies, to act as her army on the streets of Burnside. I have no idea where these robots came from or who designed and built all of them. I don’t need every little thing in my comics explained, but this is very out-of-left-field.

Barbara has been found by first-aid responders and taken to the hospital under the care of Leslie Thompkins, who happens to know her alter ego. She brings Babs her costume (I guess they fished it out of the bay?), and Batgirl is able to suit up and escape just before Oracle and her robot sentries get a hold of her. She races off to formulate her plan of attack for the next issue.

Overall, a decent issue. No real interesting plot developments to be found here and a few goofy contrivances, but the story moves along at a steady pace and the artwork by Carmine Di Giandomenico’s and Jordie Bellaire is capable enough to keep up the excitement. This Oracle storyline kicked off in issue #37 and I’m eager to see how things wrap up in next month’s #42. Until then! – Rob Veatch III