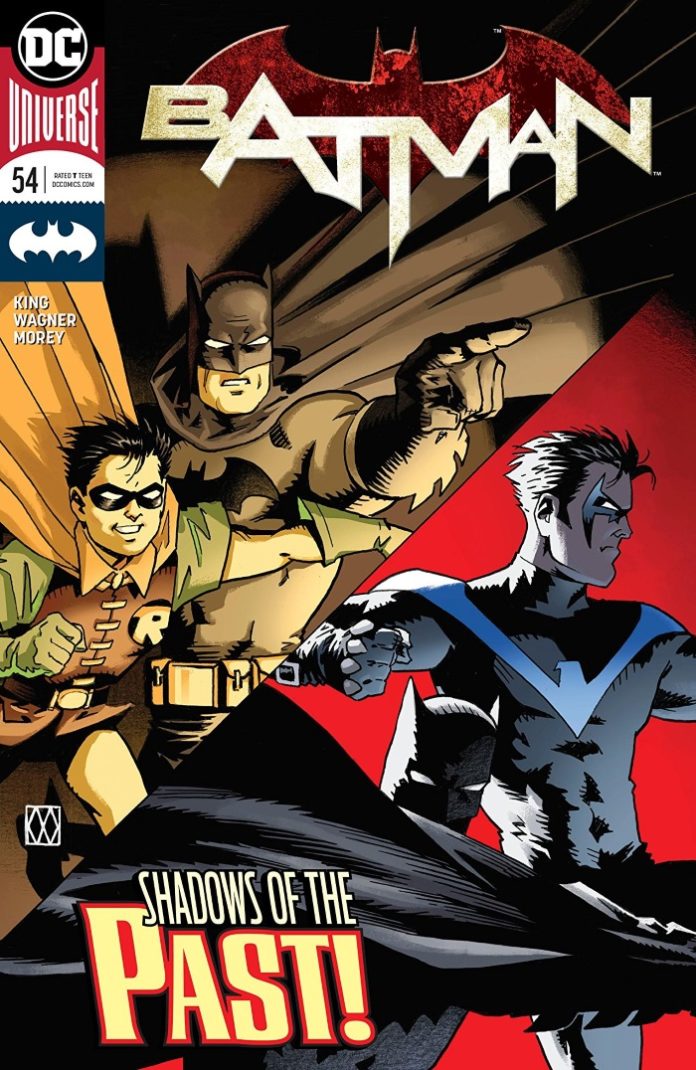 SYNOPSIS: Dick Grayson—the original Robin—gets to spend some quality time fighting crime with his mentor for the first time since Batman popped the question to Catwoman. It’s a walk down memory lane as Bruce Wayne helps Dick get over the loss of his high-flying acrobat parents, which in turn led to his crime-fighting career. Guest artist Matt Wagner (Mage, TRINITY) jumps on board for this special issue!

After all of issue #53’s rigorous ruminations on religion, God, and The Batman, Bruce Wayne asked Alfred to prepare “the original suit,” because “I need to remember who I am.”

King is joined here by Matt Wagner, whose images and words have graced the pages of so many Batman classics: BATMAN AND THE MAD MONK, BATMAN AND THE MONSTER MEN, BATMAN: FACES, the Caped Crusader’s cooperation’s with Wagner’s own character Grendel, countless covers, and the holy TRINITY, which told Wagner’s take on the first meeting of Batman, Wonder Woman, and Superman.

It’s a genius pairing — Wagner effortlessly places this classic depiction of Batman into the ever-evolving world around him, and the contrast begins with the brilliant cover. Half of it is Batman with Dick’s Robin, half of it is Batman with Dick as Nightwing. Dick has changed, but even after all of Bruce’s various Bat-suits from over the years, Batman still looks the same…on the outside, at least. Inside, we all know better. So does Dick.

(And before we go any further, I’ve got to give mountains of love to the variant cover by Tim Sale, who depicts Batman’s villains dancing diabolically about his furrowed brow like a crown with a resolute Bane at the center; both covers are handsomely colored by Wagner’s son, Brennan.)

After their colorful skirmish with Crazy Quilt, Bruce asks Dick how long he’s planning to stay in Gotham City. Dick’s services are no longer needed for filling in as Batman now that Bruce’s stint on Mr. Freeze’s jury has ended, but is Bruce’s question a dismissal of Dick…or a subtle hint that he needs a friend? After all, the trial is over, but the mystery of who framed Freeze persists.

And because this is Gotham City, there’s always another fool to attend to. Wagner makes a grocery-store battle with Condiment King simultaneously classical and comical, with Bruce’s iconic, terrifying, and awe-inspiring black-leather Batman slicing with power and agility through a well-lit aisle of canned goods, falling sauces, and blasts of ketchup (or possible sriracha). Nightwing can’t resist commenting on the absurdity of it all; Bruce is dialed in on only on the damage and harm that Condiment King has caused.

As Dick pushes Bruce to open up about being abandoned by Selina Kyle on what should have been his wedding night, Bruce recalls Dick’s earliest days at Wayne Manor as a young boy working through the anguish and anger of losing his parents. King shifts gears between past and present deftly, with Wagner accurately and effectively portraying the emotions across the pages and ages. Colorist Tomeu Morey brings it all alive beautifully, from the Flying Graysons poster on the opening page to the true hues in the various flashbacks to the dusky oranges that bathe a big conversation between Bruce and Dick in the Batcave.

King’s grasp of these characters continues to impress, especially in the moments where he explores these vintage relationships from fresh angles. My favorite example here comes courtesy of Alfred, who spends so much time trying to get Bruce and Dick on the same page, only to get frumpy in the moment he realizes just how alike they truly are. This issue is a fabulous exploration of fathers and sons, and of partners in crime and against it. “It’s one of the best issues of King’s run,” which is something I find myself saying about damn nearly all of them. – John Bierly