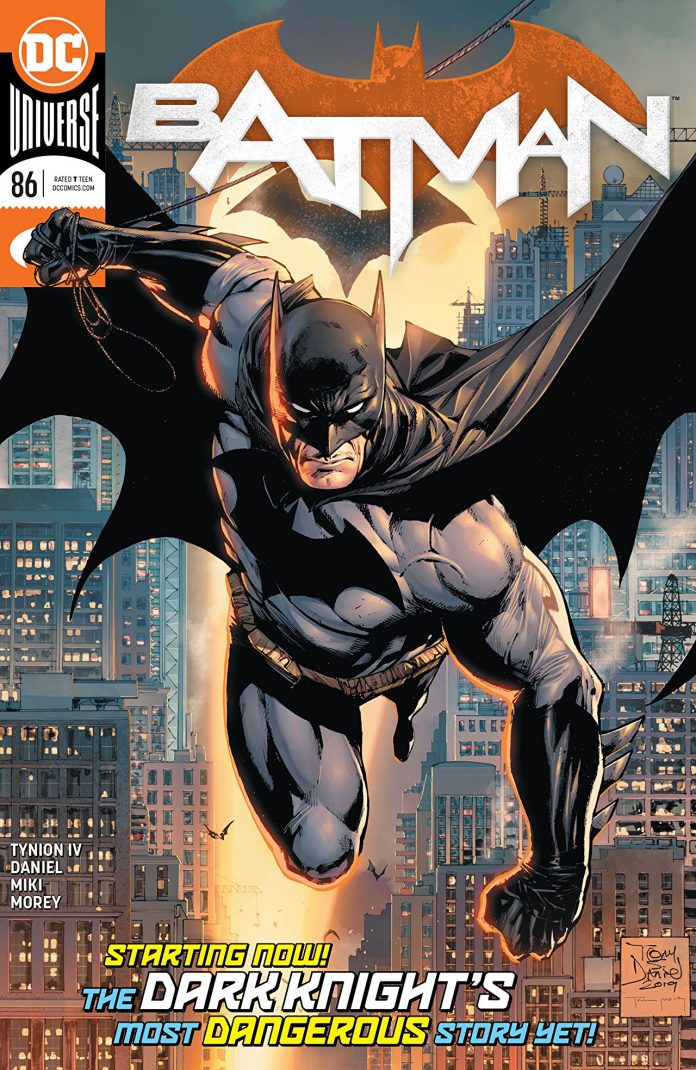 SYNOPSIS: It’s a new day in Gotham City, but not the same old Batman. With Bane vanquished and one of his longtime allies gone, Batman has to start picking up the pieces and stepping up his game. Batman has a new plan for Gotham City, but he’s not the only one. Deathstroke has returned as well, under a mysterious new contract that could change everything.  Beginning a whole new chapter in the life of the Dark Knight, the epic art team of Tony S. Daniel and Danny Miki are joined by new series writer James Tynion IV!

Now that Tom King has departed Gotham City for the time being (as we await his BATMAN/CATWOMAN book with artist Clay Mann), the current BATMAN volume that began in 2016 continues apace with writer James Tynion IV at the helm. Tynion’s own guiding of DETECTIVE COMICS through DC’s “Rebirth” initiative was hardly his first foray into Gotham City, and his CV includes several creator-owned comics, company-spanning crossovers (such as 2015’s hot-selling BATMAN/TEENAGE MUTANT NINJA TURTLES), and countless stories he’s crafted over the years for nearly all of DC’s biggest and best characters. But as it is with his mentor, Scott Snyder, Tynion is best known for Batman, and his writing has made him a fan-favorite.

Paired with fellow longtime Bat-creators Tony S. Daniel (pencils), Danny Miki (inks), Tomeu Morey (colors), and Clayton Cowles (letters), Tynion gets right down to business with part 1 of “Their Dark Designs.” We begin with Batman taking some old advice from Alfred as he climbs up a Wayne Tower construction site. “You have a design for Gotham City, Master Bruce,” Alfred once told him. “Isn’t it time the world saw it?”

Tynion’s narration for Bruce in introducing this story’s concept is beautiful and bittersweet, and it isn’t even the issue’s hardest-hitting emotional moment regarding Alfred’s absence. But Tynion also knows how to have fun, particularly in his scenes of Selina Kyle attending a fundraiser in Bruce’s absence. Though she bristles at the stiff and stuffy party-goers, her dedication to promoting Bruce’s vision never falters as Tynion organically picks up the baton from where King left Bat and Cat a couple of weeks ago. And, in typical Catwoman fashion, things get interesting in some unexpected ways.

Meanwhile, as Bruce and Lucius Fox discuss the creation not only of a new Bat-vehicle but also of the whiz-bang manufacturing innovations behind it, Deathstroke and a nasty node of assassins have designs of their own on Gotham City. And when they collide with Batman, the action is big and fast. Daniel’s kinetic action works well with Tynion’s script that keeps us engaged by having Batman and Deathstroke talk their way through the other’s attacks on each other. Morey’s color palette is a masterwork of bright pops and handsomely darker hues, with shimmering city scenes feeling downright alive behind the crouching Batman.

There’s really only one bit here that didn’t quite gel for me. Bruce and Lucius talk a lot about having faith in the new Bat-vehicle’s ability to fly (and do lots of other cool things), but I never really doubted that anything built with input from these two would experience any technical difficulties. (In all fairness, this is the first time they’ve used this rapid prototyping technique.) And yet it works, because Tynion keeps it grounded in the same hope and vision behind Bruce’s dreams for a better Gotham. And within the course of a paragraph, I’ve basically talked myself out of my biggest issue with the issue.

There’s also a small bombshell about the Commissioner that’s worth noting, but I’ll let you find that nugget on your own. An epilogue about The Joker’s gang, featuring art by Guillem March that’s as disturbing as Tynion’s script, will remind readers of a more nightmarish take on a key sequence in Christopher Nolan’s THE DARK KNIGHT.

Tynion is a popular writer, and his comics are rightfully celebrated by his fans. His Batman sensibilities and mine have always been a little bit off, but his enthusiasm here is infectious, and I think lots of readers are going to enjoy his approach that gets back to basics in a way that honors King’s run while also confidently declaring a vision and direction that are fresh and exciting.

If you haven’t read BATMAN in a while, this is a great jumping-on point. – John Bierly