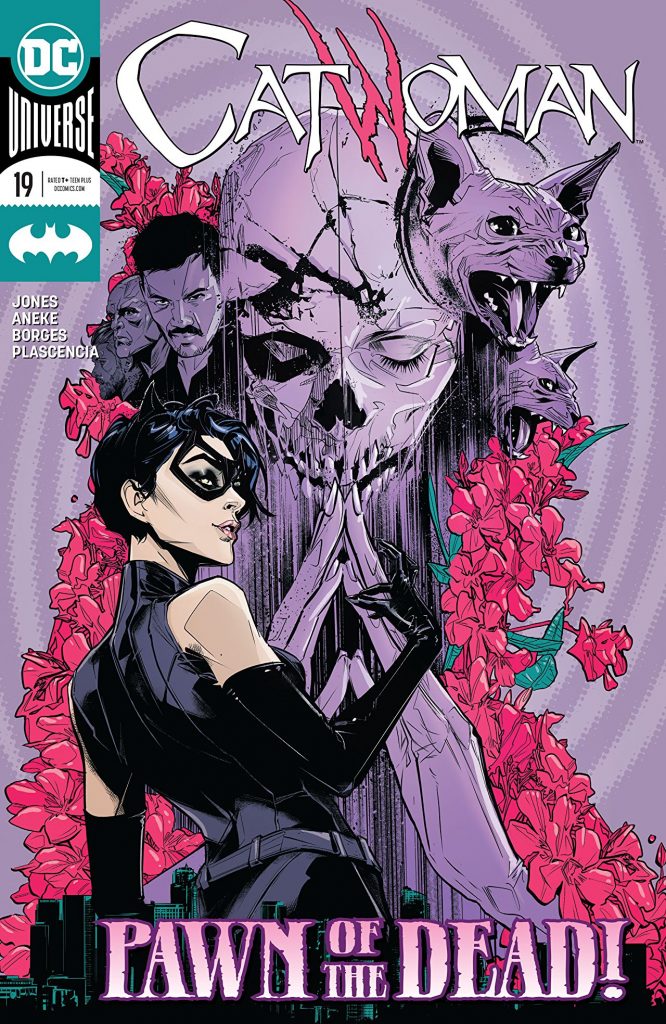 Carlos is trapped inside the locked-up Pawn Shop, keeping an eye on Selina’s nearly catatonic sister Maggie while hoards of the undead are trying to break in.  Carlos has always been able to depend on Selina in a pinch; little does he know that Catwoman is on her way to help… but will she arrive too late?

OK.  This was a weird issue.  And not weird in a good way.

One of the things that made Catwoman a great book at its outset was its grounded take on crime and character.  The first six issues (the Copycats arc) were beautiful and nearly flawless, and yet somehow, by issue 19, we have several pages of zombies being impaled and dismembered by a guy dressed up in sports equipment and wielding a sword.  This book’s tone has shifted to being heavily uneven over the last six months or so.

Plainly put: this particular issue is a major letdown.

Selina’s inner monologue is corny, the events are campy, and the dialogue is inordinately cheesy.  Carlos actually says the following to Selina: “You know what, I should have known what you were right away!  You call yourself Cat… and you really are!  Just give and take affection whenever you feel like it!”  (Cue the eye roll).  He says this to Selina after a secondary character is nearly killed.  I know that this moment is supposed to be dramatic, but as a reader, I barely know the character that was almost killed, so not to be callous, but what do I care, really?

And since when are there hordes of zombies in Villa Hermosa?  Maybe I missed something.  I mean, I know that Raina Creel had “reanimated” a couple of folks in the Lazarus Pit (we saw that happen a couple issues ago), but now there seems to be teems of zombies roaming the streets.  This felt very out of left field, and it took me by surprise (again, not in a good way).

The major problem here is that this whole issue just didn’t feel like a Catwoman book at all.  There’s no finesse, no intrigue, no compelling character moments… Frankly, it seems slapped together.  We all know what Joëlle Jones is capable of, and this is not a high point for her in this run.

And speaking of Jones, if you’re looking for her artwork in this issue, the cover will have to suffice (granted, it’s a gorgeous cover).  The inside pages are filled with art by three folks – Geraldo Borges, Aneke, and Inaki Miranda – which ranges in quality from good to adequate to pretty darn ugly, depending on what page you’re on.  Colors are also executed by a trio this month: FCO Plascencia, John Kalisz, and Laura Allred.

Here’s hoping we get some forward movement and genuine intrigue next month.  This month’s issue is a bit of a wash. – John Funderburg

BATMAN AND THE OUTSIDERS #9 Review by E. Chad Metz 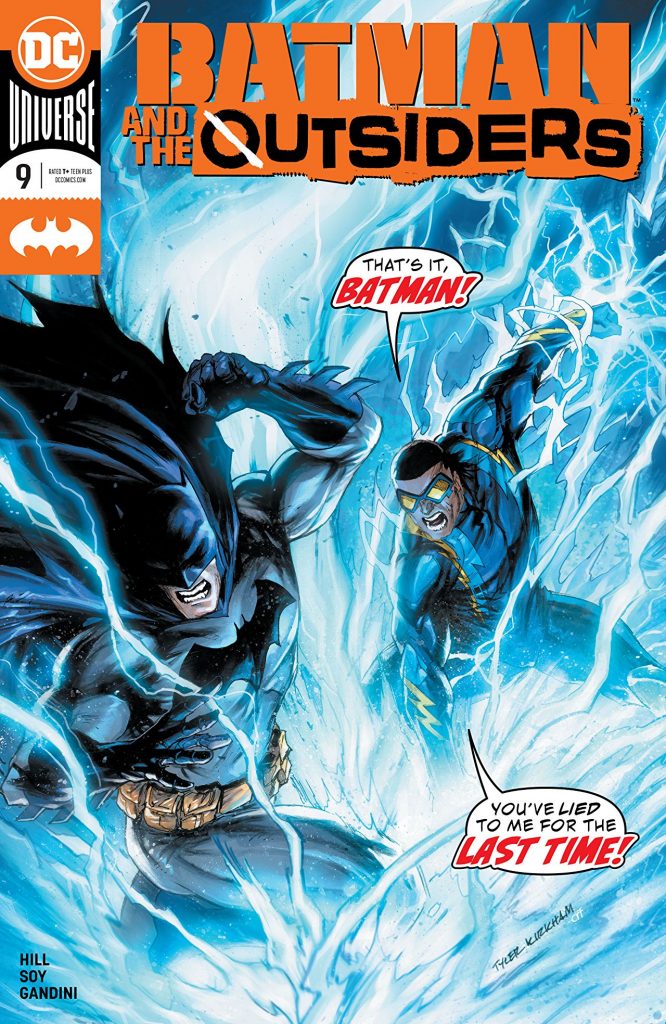 Looking at the cover, I thought we were finally getting the pay off the book has been building to since the series started: Black Lightning confronting Batman. Lightning had just lost his school in Metropolis thanks to joining Batman’s team, a team that BL doesn’t believe Batman has been truthful with. We would finally see Black Lightning try to fry Batman and see where are the sparks settled. What we got was what this book has relied so heavily on but done so well: character moments.

In what felt like the most honest interaction Batman has had in the series, he and Black Lightning talk over the tragedy done by Ra’s Al Ghul and why it happened. Batman explaining that Ra’s sees Black Lightning as the best of this new group, and the pillar that can make it all fall if he were to succumb to darker instinct. It is a scene that restores the tension between the two characters, that was missing in last issue’s interaction, but makes both men sympathetic, especially Batman. Black Lightning has been portrayed as a compassionate man of integrity. To this point, Batman has been a little shady, as he is want to do. You know he is good and is working on the side of right, but his cynicism is on full display. None of that is shown here and it hints why both men are what the other needs to make this teamwork.

While Signal and Orphan coming clean to Batman and still deciding to handle their issues together is a big step in their group as characters and a pair, the real meat of this scene is the appearance of Superman. What’s a trip to Metropolis without a visit from the Man of Steel? This conversation feels like a bit of continuity clean up (I know continuity is a dirty word to some, but it’s a comic fact of life), as it establishes the book takes place after Batman #85 and Superman #18. It is only a page long, but it feels like a shift for them. Superman doesn’t like the way Batman is handling Ra’s and hints that it may be grief from Alfred, while Batman clearly disapproves of Superman’s handling of his identity. This felt more like a setup for things coming down the road in other books.

This issue is light on action, but this is all about the character moments (which the book has excelled at). This is the most Batman thus far on the title and his inclusion was meaningful, as it should be when he shows up. There are overtly shared-universe moments in this book, your mileage may vary on these occurrences, but I always enjoy them and this was no exception. – E. Chad Metz