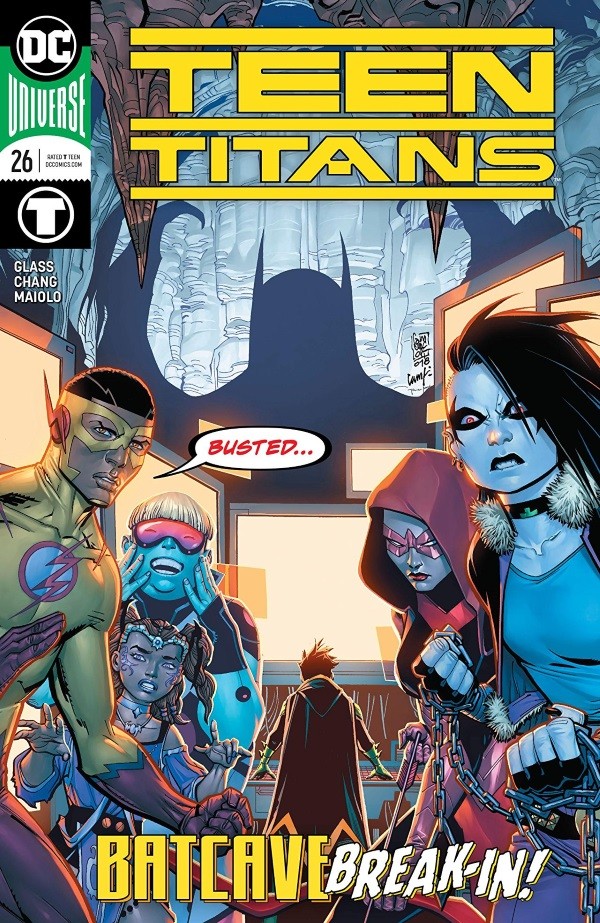 SYNOPSIS: The Teen Titans plot the ultimate break-in—the Batcave! But Batman’s security is no joke, and the Titans will need to work together to get past it without alerting the Dark Knight himself. What’s so important to Damian that he’d betray his father this way?

Oh, readers…I need to say something before I get into the review itself.

Sometimes, I even like things more than I should and look back on them later and think “Huh, I shouldn’t have liked this so much.”

I’m telling you this because I would rather to not have to write another negative review of a thing I wanted to like, but here we are again with this run of Teen Titans.

At this point, Teen Titans is a title is disarray.

I think of it as a recipe that you found online and were excited to make for yourself. You went out and got the ingredients, you read through all the steps, maybe you skipped over some of the helpful prep work, and now you find yourself in the middle of a process that seems doomed but are forced to continue to the finish. You no longer want to eat this dish.

Teen Titans #26 (and this run overall) seems to have a story that it wants to tell, a story that might even be pretty good, but fails on execution.

Its only saving grace is that the artwork is consistently solid thanks to the efforts of Bernard Chang. Chang’s work is full of interesting paneling, clean lines, intriguing action and movement, and an approach to the characters that actually depicts them as teens.

If Chang’s artwork is the highlight of the book, almost everything else needs a lot of work. Adam Glass is a writer who seems to rely too much on his weakest tendencies. Never a stranger to the odd bit of info-dump, Glass really loads up issue #26 with clunky dialogue that exists only for exposition. An exchange between Red Arrow and Robin particularly stands out, but Djinn, Roundhouse, and Crush are all victims as well. There are good ideas conveyed in a poor manner, and the book would benefit from Glass taking more time to show them develop organically.

Speaking of Djinn, Roundhouse, and Crush, perhaps it’s no surprise that these characters are consistently the weakest. Created by Glass specifically for this book, issue #26 fails to deliver further character development or reasons to care about or believe in them. In one scene, Roundhouse is given the task of hacking the Bat-Computer. We’ve been told that he has a genius level IQ, and the character rattles off some science-ise, but the scene falls flat. Either Glass has failed to develop Roundhouse’s believability (we’re supposed to think this kid can outsmart THE BATMAN!) or it’s an obvious trap. Either way, the character’s unending quips and “hip lingo” are out of place in the story and further distract from the narrative that’s trying to unfold.

The issue opens in the present, flashes back to then, and comes back to the present. If this sounds familiar, it should. Glass uses this 3-part narrative structure to bring the reader into the main action of his stories pretty regularly. While it can be effective at times or in other titles, in Teen Titans it only serves to highlight the rushed nature of the story and sticks out as a short cut to the “exciting” bits, without ever doing the setup work needed to make them fulfilling. It’s a cheat that the book needs to outgrow.

Those excited for the big guest appearance teased in this book will likely feel a bit cheated as well. I won’t spoil it here, but let’s just say the “mechanisms” behind it are flawed.

Besides the artwork, the other bright spot is an appearance by Alfred and a well-written exchange between him and Damien. Glass is at his strongest in these quiet and personal character interactions, but sadly he and the book’s editor haven’t seemed to realize it.

Overall: Poor writing and characters in need of development hurt this issue and the run. Come for the artwork, but be prepared to feel disappointed. – Garret Grev